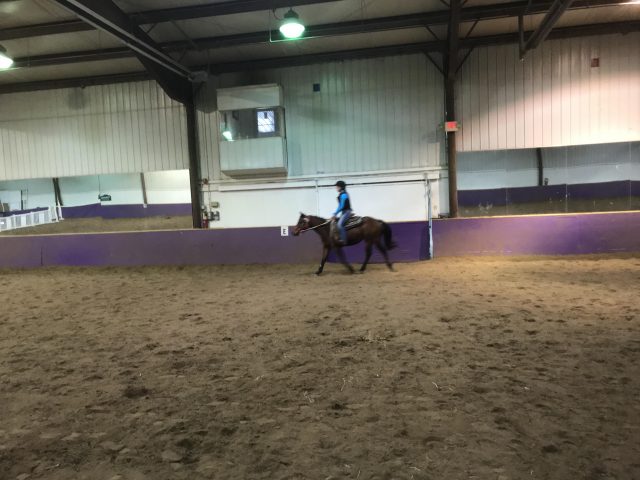 Haley finds new meaning in the concept of “riding like no one is watching” — not in performing in the show ring, but in riding her just-started two-year-old. 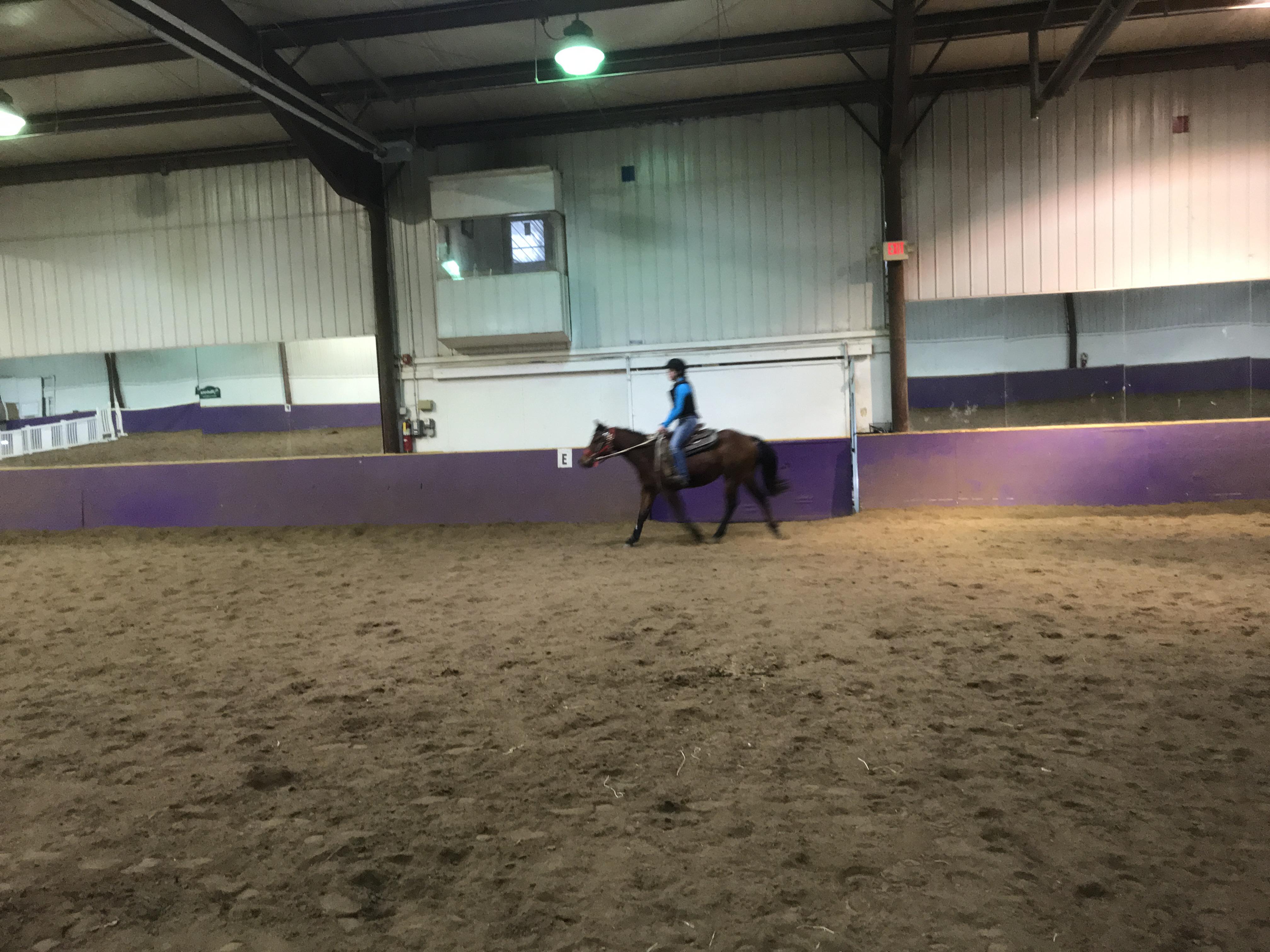 Before this semester, all the work I had done with Slide took place at my barn and my coach’s barn, both private facilities with no audience present. Groundwork and desensitization work occurred in an environment I had almost complete control over, in an arena and barn with no extra traffic or other things going on. In some ways, having no one around put pressure on me because what I did in private with Slide would reflect later in public. When I worked with him at home, I operated using my judgement alone. If I made a mistake, there was no one there to correct me, so I had to use all the self-awareness and horse sense I possess to make sure I was being constructive with him.

At Alfred, a much bigger and busier barn than Slide has seen before, there are constantly both distractions and audiences. The mirrors lining the indoor arena were a phenomenon to Slide, who was torn between wanting to spook at the reflection horse “chasing” him and wanting to stop and check himself out. With an aisle of stalls on each side of the arena, the tractor and spreader go through most mornings, revving the engine and slamming stall doors shut at intervals. Windows line one end, opening into a high-traffic viewing room and office.

People in and out of the barn for classes and practices also pose a distraction for both Slide and me. The coaches joke that the whole team knows if someone fell off before the practice is even over, and although that’s a slight exaggeration there is some truth to it. Oftentimes, people will approach me and say that they heard Slide was good that day, or that he spooked at the tractor, or that they had seen him playing with Q, the other colt, in the pasture.

One of the classes at the barn watched my first time mounting Slide in a stall, my first time ground driving and driving him in the arena, and my first time riding him off the lunge line. Although our audiences are always quiet, polite, and made up of my friends and teammates, I have to force myself to not perform for them like I’m used to in practice or at shows. In these early rides, Slide needs me to focus completely on him. Every issue we’ve had — nervousness while mounting and noise sensitivity with loud sounds in the arena — have been intensified by my not perceiving his anxiety and body language until he was already upset.

It’s a little unnerving to be so visible to everyone during a stage of training I am unfamiliar with and relying heavily on Harry’s guidance. I am used to filling the role of an Open rider, practicing advanced pattern maneuvers and riding with subtle cues, so it feels odd to begin every morning in a safety vest, bouncing around on a two-year-old and using slow, exaggerated cues. Slide’s apprehension in front of groups mostly comes from his concern that everyone is not petting him, but if I can overcome my reservations and ride like no one is watching, like there’s no loud tractor on the other side of a thin wall, and like I am confident in my every cue, the experience of learning with Slide while being observed will do us both good in our future together.