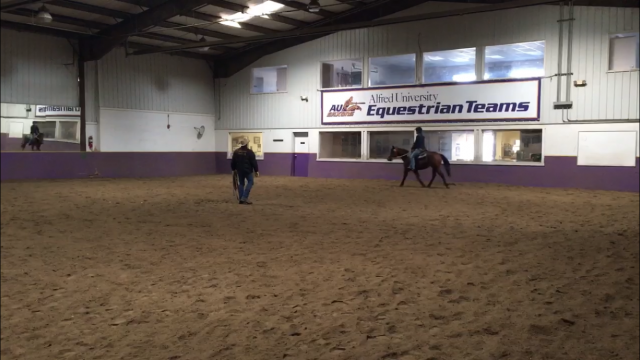 “One of the most important things I’ve gleaned from this experience is that you can’t get upset working with horses, especially young ones.” 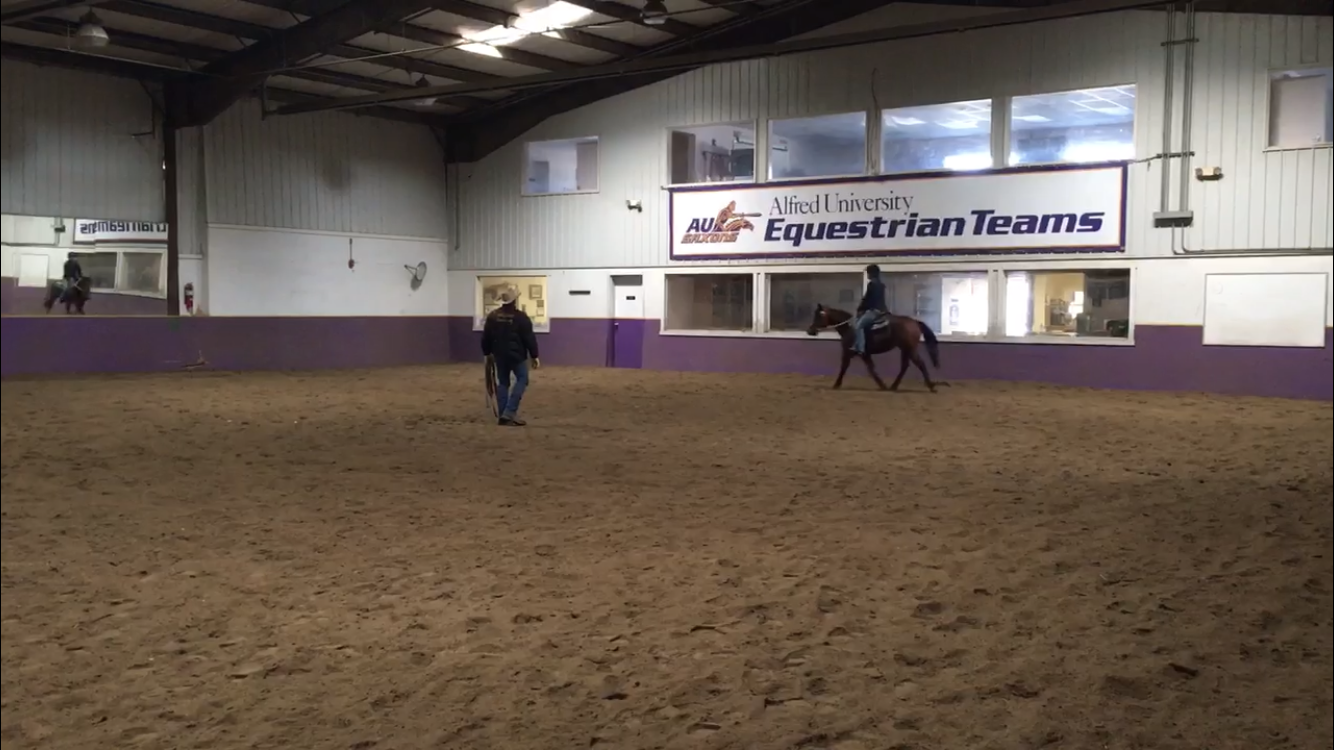 On Easter morning, my coach and I went to the barn at Alfred so I could ride Slide in the arena for the first time without anyone else at the barn — no spreader banging around in the aisleway, no horses going through, and no classes or other traffic to distract us. Before then, I’d only ridden him in the stall, working on standing quietly while mounting, moving around in the saddle, turning, stopping, and backing. Since we were solid on all of those mechanics in the stall, Harry deemed us ready to venture out into the arena on a lunge line.

One of the most important things I’ve gleaned from this experience is that you can’t get upset working with horses, especially young ones. You have to be simultaneously emotionally detached and physically aware and careful of each movement and cue. In Slide’s case, whenever he makes a mistake, it’s out of nervousness and not a desire to misbehave, so Harry has instructed me to react accordingly, with pervading calmness and repeating the scary thing slower and quieter until he no longer reacts. “We don’t want to rush him,” Harry tells me almost every day, a mantra I repeat to myself every time it seems we’re not making much progress.

All of my riding habits and mannerisms show up on a young horse, even the ones I usually don’t have to think about, like straightening my saddle, moving my foot in the stirrup, or leaning to the side to grab something. Trying to stay out of Slide’s way and just let him feel me up there has been challenging — starting out, I need to be very limited with my cues and simply let him adjust to the added movement of a rider on his back.

During our first venture into the arena on Sunday morning, what I thought was going to be a short, quiet ride began with an unexpected yeehaw moment. Harry and I both cued Slide to walk on, Harry from the center of the circle and me from on Slide’s back, and our combined cues plus my weight in the saddle spooked him. Our first few circles happened at rather a faster pace than we had hoped for. When he took off, I gripped with my inside calf as an instinctive reaction to keep him from trying to jump into Harry’s lap, but that knee-jerk reaction that might have helped on a broke horse only exacerbated the situation for Slide. We got him stopped after a couple of circles, and before we started off again Harry said, “Well, we may have to miss Easter brunch.”

The idea of not rushing Slide applied here too: we couldn’t hurry him to finish up and calm down in time for our Easter brunch, and trying to would only make him more nervous. If we gave up after that initial spook-run, he would have been even more afraid the next time I rode him. Instead, we started over and Slide settled into his usual lunging motions, going through the walk, jog, and lope each direction with me on him.

I worked on keeping my hands soft, my legs away from him, and my seat still. Letting him adjust his pace and balance himself without any interference from my aids felt strange but also somehow relaxing as I felt him start to learn how to use himself with a rider on his back. By the end, Slide showed no more inclination to scoot forward, and Harry let us off the lunge line to walk and jog before calling it a day. That old cowboy patience Harry exudes is something I hope I can always carry with me, as well as his impeccable timing: we even made it home in time for brunch.