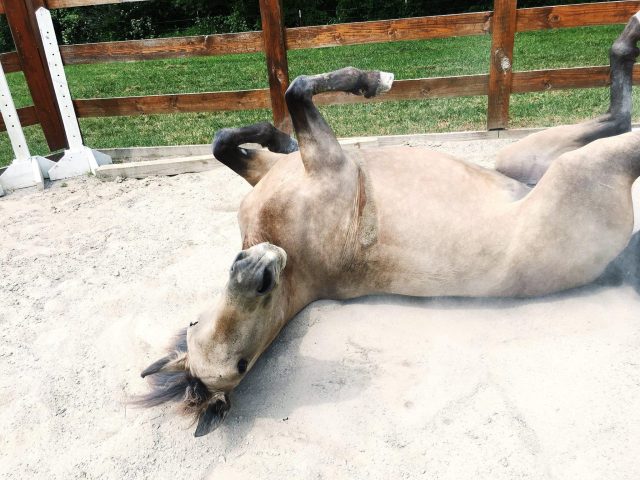 A new mini-series about adopting a wild horse. 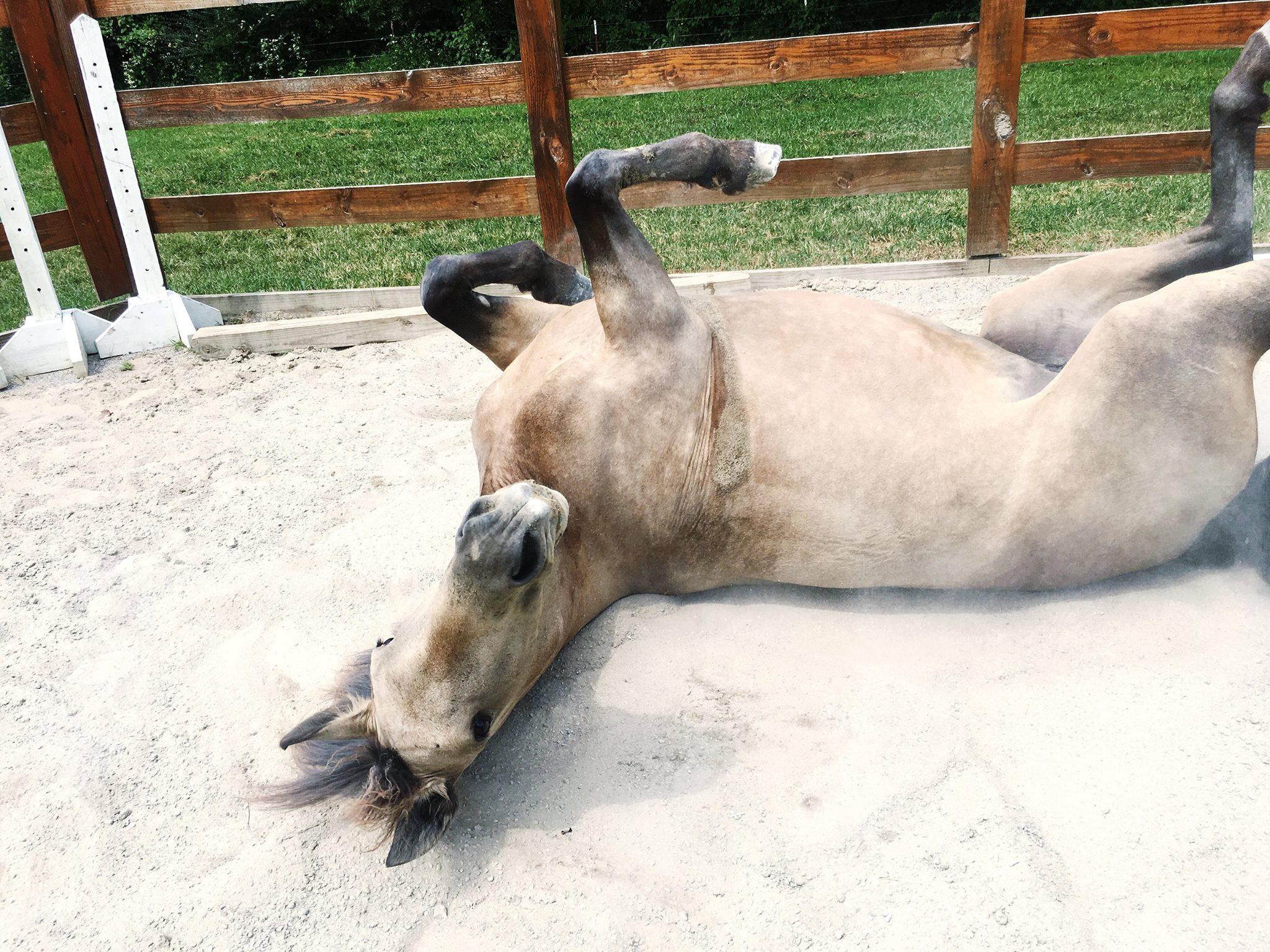 Krystal Douglas had settled at a table in a coffee shop to “knock out some work” when the Bureau of Land Management (BLM) texted: “You can pick up your mustang.” She shares, “I started to sob. I couldn’t believe Sterling was mine.” From uncertain freedom with her herd on open land – captured and shuffled from state to state and holding pen to holding pen, Sterling the mustang will never end up in slaughter. She has a home — and a friend for life with Krystal.

Krystal wants Sterling to put a face to the thousands of BLM mustangs and burros in peril. She shares why she adopted a wild mustang, how she adopted, her experiences in acclimating and bonding with a wild horse and their continuing journey based on trust and respect. Krystal hopes the roadmap she offers will encourage more people to adopt.

My Introduction to Sterling

Sterling was nosing grass with two other horses when I arrived for the interview. She meandered to the fence, tasted my camera, tried to nuzzle me and to deliver a mustang “long-tongue.” “So this is a skittish wild horse?”

Sterling wandered away to the top of the fence line. She waited, staring down the driveway to the entrance. Her ears pricked forward. She snuffed. Krystal’s car crested the drive. “Mom!” Sterling trotted along with Krystal’s car. Seemed to me that Sterling had been waiting and I was just a brief diversion.

Krystal cleaned Sterling’s feet as I fired off questions. The mustang dozed, raising each foot. A peaceful pedicure is progress in their wild horse gentling-journey together.

What prompted you to adopt a BLM mustang?

“I learned about the mustang/burro conflict while out west in September 2016. I learned that these wild horses were being uprooted for human profit; it stuck with me. I was aware that the mustangs can end up on a truck, on a two-day journey, without water, to slaughter facilities in Mexico and Canada. I imagined the terror a wild horse would feel crammed into a trailer with 11 other frightened horses. When I saw the faces of mustangs eligible for adoption, their plight became real to me. I couldn’t stop looking at the faces.”

When did you start the process of adoption?

“2016. Searching the adoption site, I was drawn to a buckskin filly from Beatys Butte — a Herd Management Area in Oregon. She was a tiny yearling. Her delicate face and build had me hooked. I contacted her Trainer Incentive Program (TIP) trainer. (TIP was created by the Mustang Heritage Foundation to gentle less desirable mustangs.) The filly I wanted had already been adopted. This was fantastic for that little horse, but I was crushed. I was ready to adopt right now.

“I worked with the trainer to use her network of mustang trainers, owners and storefronts (authorized mustang adoption pickup areas across the United States). Late one night, I got a text with two photos of a 16-month old filly that had bounced through five BLM facilities and ended up in a TIP program in South Florida. After three dreams about this filly, I asked for videos. One video showed her trotting – no, floating — just like my heart. She was the one. This was Sterling.

“I submitted preliminary paperwork outlining where and how I would keep Sterling. This included fence heights, safety plans, shelter, etc. I was approved in a week. To process adoption papers, I needed the BLM tag number. I waited two excruciating weeks for the TIP trainer to give me Sterling’s BLM tag number.

“You don’t own the mustang and get the title until the one year mark. This protects the horses from kill buyers who adopt for profit. If the horse is passed over three times, the BLM will make the horse eligible for immediate sale for as little as $25. That’s when the kill buyers move in.

“I melted into tears when I got the text that Sterling was mine. Everyone in the cafe where I got the news was eyeing the crazy weeping girl. I realized that my first horse – that I would actually own – would be a wild mustang.”

How would you advise someone who wants a BLM mustang?

“Research all of the avenues by which you can adopt. There are internet adoptions, local adoption events, the Mustang Heritage Foundation and more.

“Submit your preliminary application right away. You must have approval before you can pick your horse. Get that BLM tag number from the trainer. Be nice, but firm. You can’t adopt without it. Don’t run the risk of losing the horse you fell in love with to someone who already has the number.

“Read — watch videos — listen to every bit of content on mustang training and ownership available before you bring your mustang home. I couldn’t find a lot of recent publications for the do-it-yourselfer. You can bring in a trainer to train and acclimatize your mustang for you. Hundreds of trainers specialize in mustangs, but, please, only hire a trainer with mustang experience.

“Really learn what mustangs need. For example, avoid stagnant water — a lot of mustangs will refuse to drink stagnant water. Their intuition may warn them that the water can be poison. You can lose your horse from dehydration because of her instinct.”

“I wonder the same thing. You don’t quite know what you’re getting or what they’ve been through. I know that Sterling was caught in Oregon. She was probably rounded up by helicopter, herded into a holding pen, freeze branded, vetted and provided with hoof care — all unfamiliar experiences for her.

“I know that Sterling was shuffled to Burns, OR, then Indian Lakes, then Palomino Valley, then Unadilla, GA. Relocation is common for BLM mustangs in order to give more potential adopters a chance to find the right match. Judging by Sterling’s teeth and hoof stress lines, she was about seven to eight months old when captured, then lingered in holding for a year.

“My gut says Sterling had a run-in with a coyote or something. She’s missing the tip of her left ear and she was terrified of dogs when I first got her. Her favorite thing is when I rub inside her ears. She loves when I cover her eyes with my hands. She usually rests her head against me as if to say ‘Okay, night-night!’ She yawns if you lightly pinch her nose.” 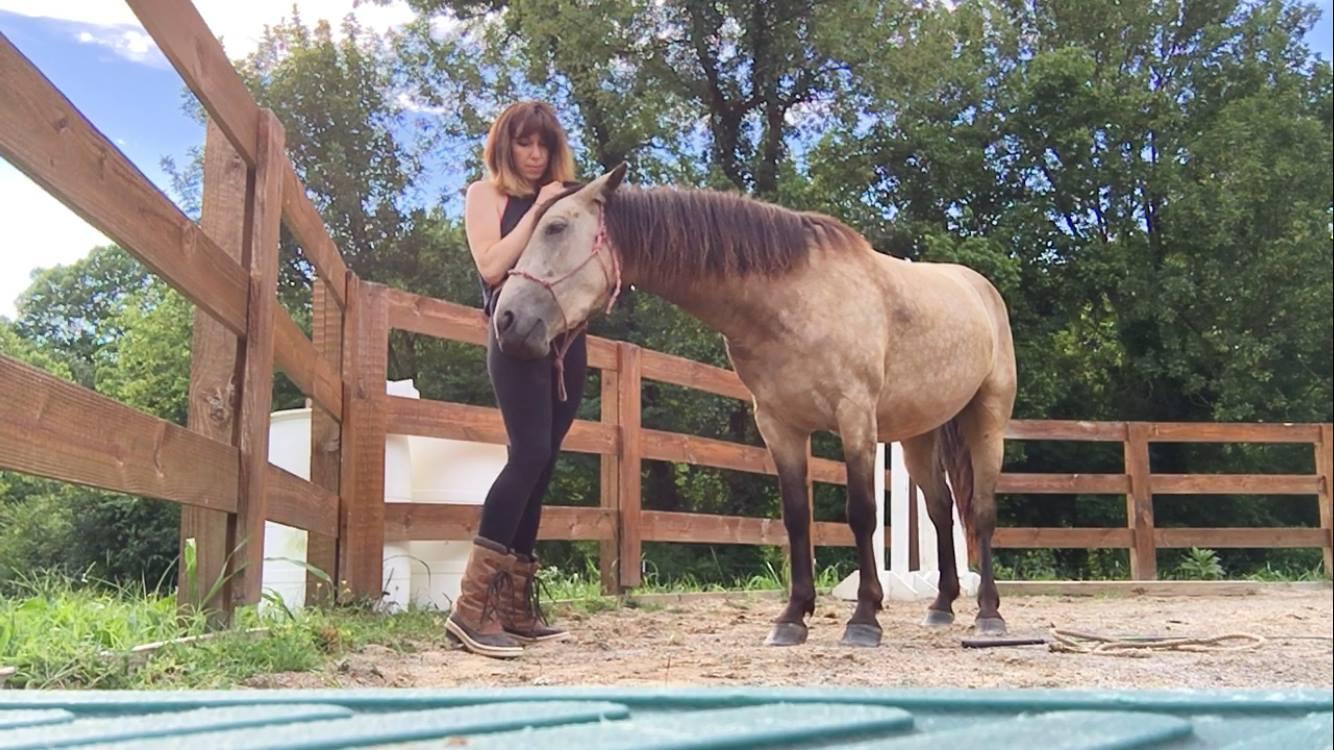 In the next installment: some background on the BLM and connecting with your wild horse.