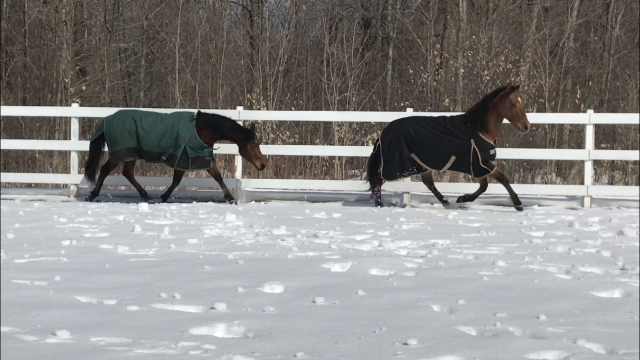 “He danced, whinnied, and tried to chew on his lead rope while the class looked on. I felt like a mom in Walmart whose child throws a temper tantrum while she’s trying to check out, apologetic and unable to really fix the problem in such close quarters.” 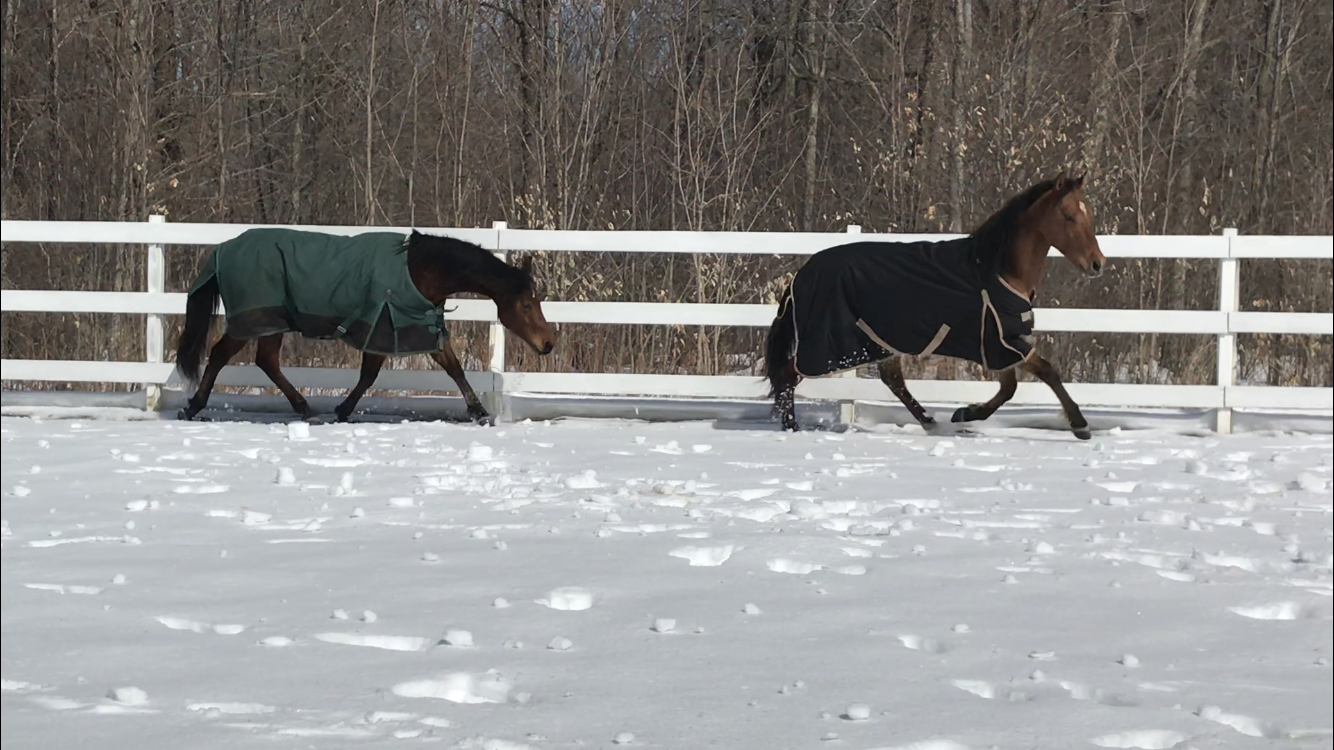 Our colt-breaking class moved from West Almond to Alfred last week to take advantage of the larger indoor arena and space to drive both colts at the same time. They were both hesitant in backing off the trailer, the result of an icy winter and poor conditions in which to practice loading and unloading. Luckily, we had dry ground on which to unload, so Harry had us practice backing off, loading again, and repeating until they were both more confident with their footing.

We began class as usual the following morning, starting by walking the colts around in the arena to get them used to the purple and yellow walls, large sections of mirrors, and general commotion the Alfred arena presents. Peggy Shank, the head hunt seat coach and western trainer, had her groundwork class in the arena while I let Slide look around and make faces at himself in the mirror. She called me over to stand in front of her class and explain what groundwork I had done with Slide thus far, and what more Harry planned to have us do before riding them.

Standing still and working on patience has been a core element in my work with Slide, and normally he will stand quietly until I ask him to move. However, that first morning, he danced, whinnied, and tried to chew on his lead rope while the class looked on. I felt like a mom in Walmart whose child throws a temper tantrum while she’s trying to check out, apologetic and unable to really fix the problem in such close quarters.

Ground manners are non-negotiable when I work with Slide, and he doesn’t usually test the limits of this rule. “This is bad, for him,” commented Harry while I explained ground driving to Peggy’s class. Knowing that I get nervous in front of crowds and that this was Slide’s first time seeing a different arena, I kept my body language as neutral as possible and worked on moving his hips and shoulders to encourage him to focus on me, working walk/halt transitions and staying in position beside me while we walked. The mirrors and purple walls remained far more interesting than any cue I asked for.

The class followed us into the barn aisle, where I cross-tied Slide to harness him for ground driving. He pawed and shifted around, showing more of his two-year-old baby brain than I had seen in a while. I harnessed him quickly, aware of the class watching and maybe wondering who let me have a two-year-old colt when I couldn’t even make him stand in the cross-ties. “Am I going to drive him on the cart today?” I asked Harry. Slide had been on the training cart a few times with no trouble, but I was unsure about asking so much of him in a new place and with an audience of my peers and coaches.

“If he’s ready,” said Harry, wise in the way only old cowboys can be. As it turns out, he was ready enough for Harry — after a few laps of me walking and jogging behind Slide, whose attitude was much improved by the presence of blinkers on his driving bridle, Harry hauled the cart out into the arena and waved me over. We hitched him to the cart, I settled onto the seat, and at my cue to walk Slide trotted off brightly, jolting me backwards. “I always say you get into less trouble jogging than you will walking,” Harry told the class behind me. I let Slide keep jogging in the hopes that everyone thought the departure was on purpose. He shied at the mirror again, then at one of the side doors, and scooted forward for a stride when a stall door slammed in the aisle.

I worked on circles and figure-eights, transitions, and backing up until I had his attention. Harry stood in the center, watching me and occasionally explaining something to one of the students, but since he didn’t offer any further instructions to me I inferred that I was doing okay.

My discomfort at being used as an example for the groundwork class arose from trying to show a perfect demonstration of ground driving and driving, but instead my peers saw parts of the learning process (both for Slide and me). As much as I dislike it, having an audience for some of my classes will make me be more self-aware in how I deal with stress and sublimate my nervousness before it can affect Slide, which will help us as a pair in the long run. We may have come to Alfred to take advantage of the larger space, but I think that the extra commotion and traffic will do us equally as much good.