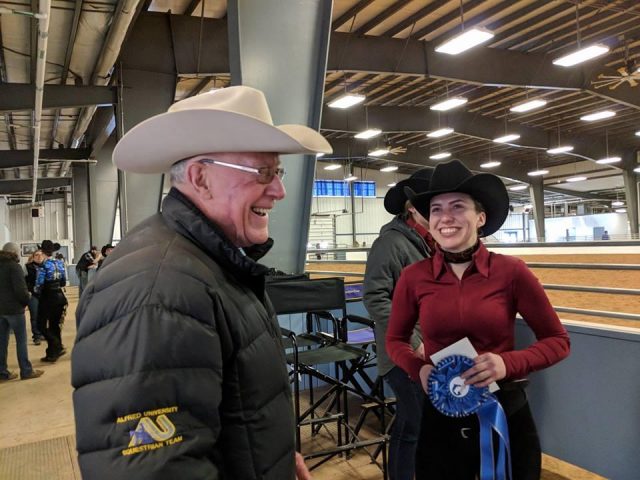 Haley Ruffner’s team hosted one of three intercollegiate Semi-Finals taking place last weekend across the country, and last week Haley was swamped both with show planning and preparing to compete herself. How did the show turn out? 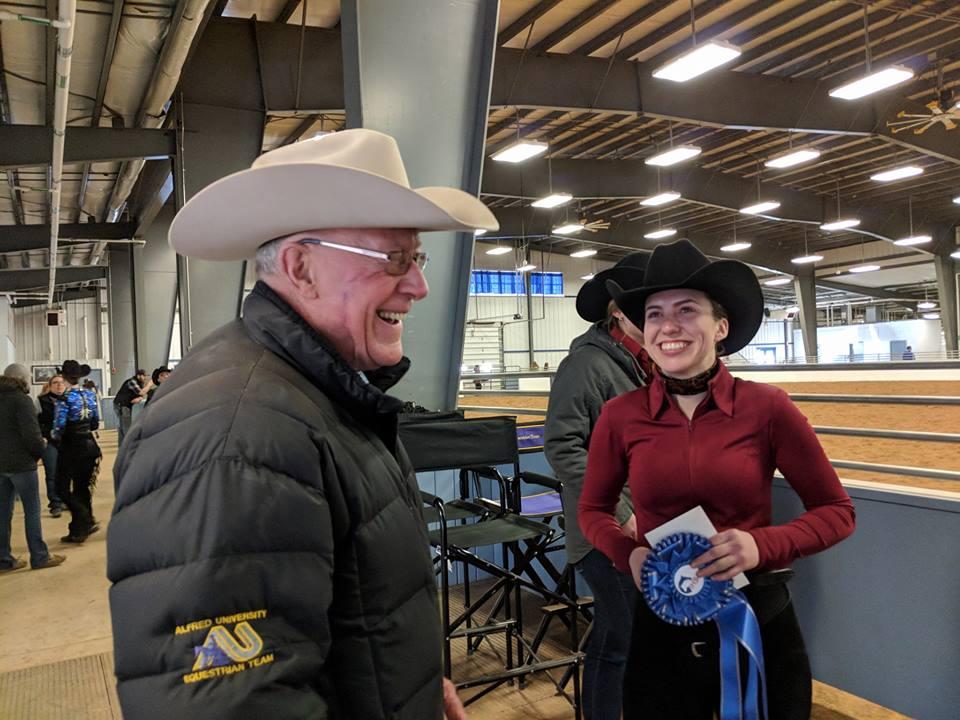 There are few moments as gratifying in IHSA as when the entire team comes together seamlessly to run a show — the entire western team and a few volunteers from the hunt seat team worked hard all weekend to maintain our herd of seventeen horses at the showgrounds, cleaning stalls, keeping the aisleway immaculate, running the horse show office, warming up horses, handling, feeding, running the draw table, and supporting our riders. This extensive list of jobs seemed daunting going into the weekend, but everyone pitched in and went above and beyond to make the show run smoothly.

I cannot express enough gratitude for other schools and owners who provided such nice horses (thank you to Morrisville, Cobleskill, and Mike Bednarek), all the show stewards and officials, and sponsor NRHA. Above all, I am grateful for my coaches and teammates.

In addition to making it through the weekend without any management mishaps, the show itself was a success — Alfred University made it as a team to Nationals for the first time in six years. We got off to a rough start due to my less-than-mediocre reining ride, but our placings rose throughout the weekend until we ended the last class with a win.

Each year that I’ve been to Semi Finals as a team rider, my class has been the very last one of the weekend, and each year I have fallen short on the placing that would have allowed us to jump up and make Nationals. My first year, I broke in the pattern and placed seventh with no points contributed to our team standing. Last year I mixed up my pattern with the one before but caught myself short of going completely off-pattern, earning a fourth place. This year, however, I finally pulled it together and won the Team Open Horsemanship.

My last ride of the show came after a harrowing couple of clothing mishaps — on Saturday morning after the reining, my chaps zipper broke open. One of my teammates was kind enough to loan me her chaps for the remainder of the day (and several others offered to let me wear theirs), for which I am eternally grateful. Regular horse show stress is one thing, but this weekend I discovered it’s another thing entirely to be standing on a picnic bench clinging to the arena fence, stuck in a pair of broken chaps fifteen minutes before you have to show.

Creekside Saddlery took my chaps and got the zipper replaced overnight, but Sunday morning after the individual reining the other zipper broke. My family, who had come to watch, along with another teammate and her mom, helped wrestle me out of my chaps, tugged the zipper up tooth by tooth until it was lined up again, then zipped me back in. Altogether, my teammates and family probably spent upwards of a half an hour wrangling me in and out of my chaps during the weekend. Against all odds (apparently, I need to lay off the ice cream between now and Nationals) my chaps held for the rest of the day.

Hosting an IHSA Semi-Finals show tested our team’s strength and organization, but it also proved how supportive, positive, and professional everyone was when push came to shove. We have now either hosted or gone to a horse show every single weekend since the start of the semester, and the constant drilling of shows seems to have prepared us well for this larger event. The highlights of the show were having the opportunity to ride such talented horses, spending time with my friends, family, and teammates, and knowing that I helped qualify my team for Nationals — nothing beats the look on my coach’s face when he realized we had made it.