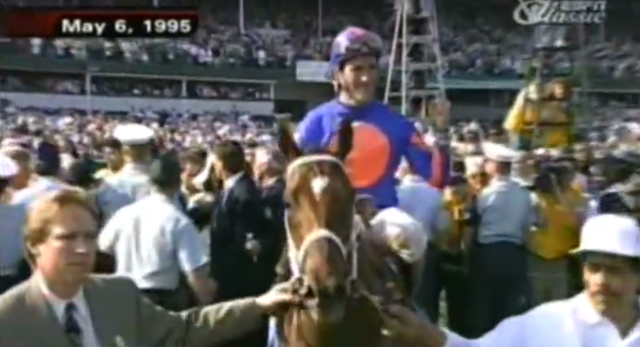 Thunder Gulch, winner of the 1995 Kentucky Derby and Belmont Stakes and a shaping force of the Thoroughbred industry at stud, passed away earlier this week. We remember him through his two great Triple Crown wins.

D. Wayne Lukas had two other far more likely-looking horses in his quiver prior to the 1995 Kentucky Derby: Timber Country, a juvenile champion, and the star filly Serena’s Song. The combined entry was the 3-1 favorite for the Derby, with Thunder Gulch a distant 24-1.

But when the chips were down in a gritty race, it was Thunder Gulch who would win the day:

Timber Country got the better of him in the Preakness Stakes, but Thunder Gulch came back strong in the Belmont Stakes — no mean feat considering the tight schedule of the Triple Crown each spring. Never a particularly flashy horse, Thunder Gulch nonetheless proved he had the mettle, stalking Star Standard and hanging on for an incredible stretch duel to win.

Thunder Gulch, in his three-year-old season, made ten starts, winning seven (six of those Grade 1 or 2 stakes) and netting well over $2 million in earnings. His style was described as “workmanlike” — in the words of his jockey Gary Stevens, he just got the job done. He suffered a condylar fracture in the Jockey Club Gold Cup that was discovered the following day, and retired to stud.

At stud, Thunder Gulch left his mark not only on North American breeding but around the world: he stood at Ashford Stud in Kentucky, but also stood for a year in Japan as well as shuttled for seven Southern Hemisphere seasons in Australia, Argentina and Chile. He was honored as leading sire in 2011 when his best-known offspring Point Given won five Grade 1 stakes including the Preakness and Belmont; other outstanding offspring include Circular Quay, Balance, Tweedside, Shotgun Gulch, Sense of Style and J. B.’s Thunder.

Thunder Gulch was pensioned in 2015 to live out his days at Ashford Stud. On March 19, 2018 at the age of 26, Thunder Gulch passed away due to the infirmities of old age.

Rest in peace, Thunder Gulch, and thank you for the memories!