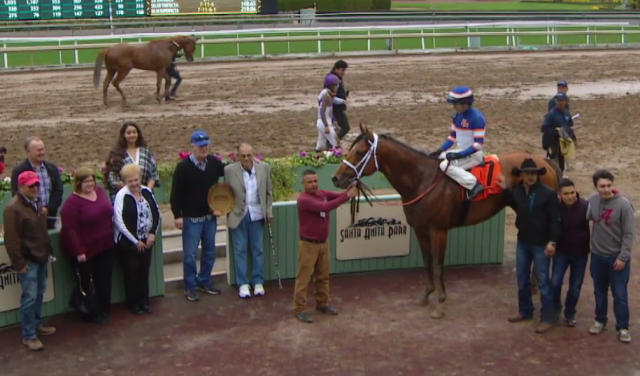 While the international superstars like California Chrome, Winx or Arrogate might capture the attention of racing fans, it’s horses like Tough Sunday that capture hearts. For a horse that’s defying the odds just to be alive, the fact that Tough Sunday captured his first career stakes win over the weekend is staggering.

Tough Sunday developed dummy foal syndrome as a newborn as a result of a difficult delivery — he had no nursing instinct, was rejected by his mother and was both deaf and blind. His owner and breeder, Nick Alexander, walked past his stall, hours away from having to make an agonizing decision over the colt’s fate, when he noticed Tough Sunday following his passage, his vision miraculously returning.

The horse eventually regained his sight, but remained hearing impaired. His dam, Sunday Dress, did accept him over time, but the colt never quite figured out how to nurse and was bottle-raised. For most horses, survival would be the happy ending to this story. For Tough Sunday, it was just the beginning.

Not only did Tough Sunday enter training, he actually proved to be successful: he broke his maiden in his third start and never looked back; his most recent win prior to this past weekend was last November at Del Mar. He picked up fans everywhere as the story spread about his tough start to life and his ability to overcome so much.

On Sunday, however, Tough Sunday achieved another milestone in his career: his first graded stakes victory. In the Sensational Star at Santa Anita, Tough Sunday braved a muddy track — conditions were so wet that the six-and-a-half furlong race was actually moved off the turf where it was supposed to be run — and set up a perfect trip to hold off the field.

Tough Sunday, you are a true inspiration! Go Tough Sunday — and go riding.