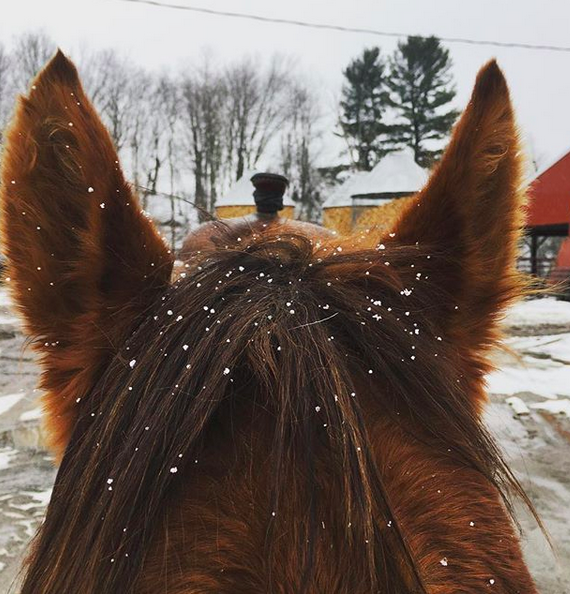 I’ve seen some pretty weird things on the various farms and ranches on which I’ve worked over the years, but this incident might just the cake.

Other than a week of false-hope-inducing warm temperatures in February which gave us the first glimpse of the grass that we’ve had since December, the fields and pastures here in western New York have been covered in snow. We’ve gotten over 210 inches total in my particular neck of the woods, though mercifully it’s all gone through some cycles of compression and partial thaw or we’d literally be digging tunnels from place to place.

As various layers of snow melt off, refreeze and get covered again by the latest front coming through, secrets are revealed — branches and other dangerous snags lurking beneath the snow (which make me cautious to move out at speed in unknown corners of the farm), various bits of equipment and supplies we forget existed, and occasionally some truly random objects.

On our amble back to the barn this weekend from a session of hill work in the deep snow — our time spent at the walk in ever-changing winter conditions has certainly been good for my OTTB Jobber’s fitness — I glanced down in the barnyard to see the tail and feet of a pigeon sticking straight up out of the snow. We had a resident flock of the flying pests around the farm, pecking at loose corn around the cow barn and pooping on our gates. The snow around this pigeony posterior was pristine and untouched; somehow this fallen denizen of the sky had evaded consumption by our pirate crew of semi-feral barn cats.

It was unclear to me if, somehow struck perhaps by a heart attack or other medical emergency, this pigeon had plummeted like a stone out of the sky to spear himself into the snow head-first in a tragic yet beautiful high-dive, or perhaps he had been deposited there earlier in the winter, left to sit upside-down in this bank like a refrigerated shrink-wrapped chicken and forgotten until the afternoon sun had melted away the snow around him. Either way, his tail and little clawed feet pointing up to the sky in which he had once fluttered were at once tragic and ridiculous.

As these various thoughts and musings whirled ’round my head, Jobber, who likes to naturally carry his head low like a western pleasure horse, swung his muzzle around to investigate this winged lawn dart. I’m not usually in the habit of letting my horses mouth up dead birds, so I began to shorten my reins to guide his face away.

Jobber exhaled on the pigeon’s tail, and the bird, rather unlike a dead pigeon, burst backwards up out of the snow like a flushed partridge, an explosion of wings and nervous clucking and snow scattered all about. This is how I die, I had time to think to myself as I scrambled to gather up my reins. Killed by a horse spooking at an undead pigeon.

The pigeon, likely suffering not only from a literal brainfreeze but some seriously confused telemetry, managed to flutter headlong into the wire fence along which we had been riding, slingshotting himself back into Jobber’s face for a moment and setting all the wires humming like a recently-strummed guitar, before wobbling up into the air and disappearing over the rolling hills across the road, leaving as mysteriously as he had arrived. Jobber gave two great leaping strides and came to a whirling halt of his own accord, ears pricked on the wobbly dot rapidly disappearing over the horizon.

Reins still akimbo, I patted Jobber’s shoulder as I swore out loud. What on earth this bird was doing bottoms-up in the snow with his feet sticking straight up in the air, looking for all the world like a very dead pigeon, I will probably never know.

What I do know are two things: don’t let your horse poke dead pigeons; two, I have the most tolerant horse on the planet.