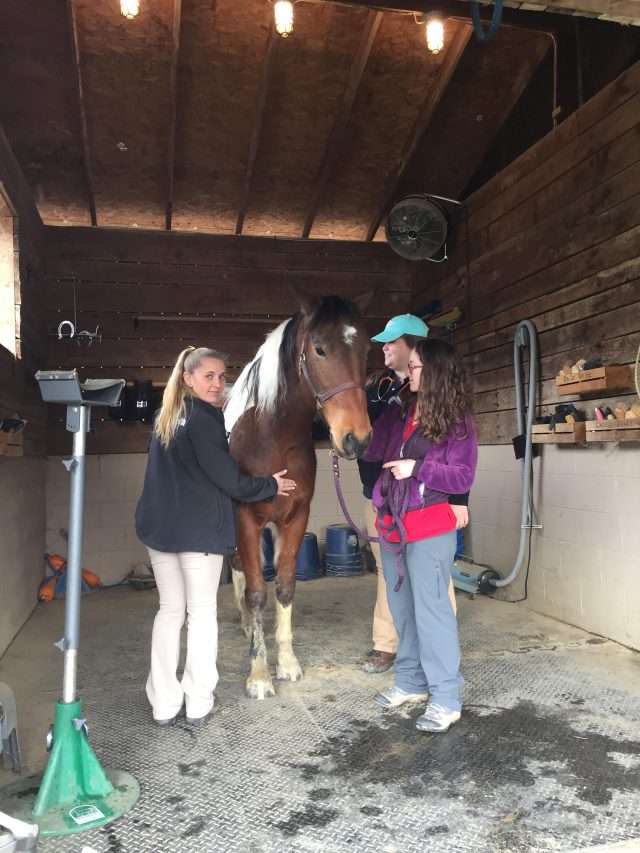 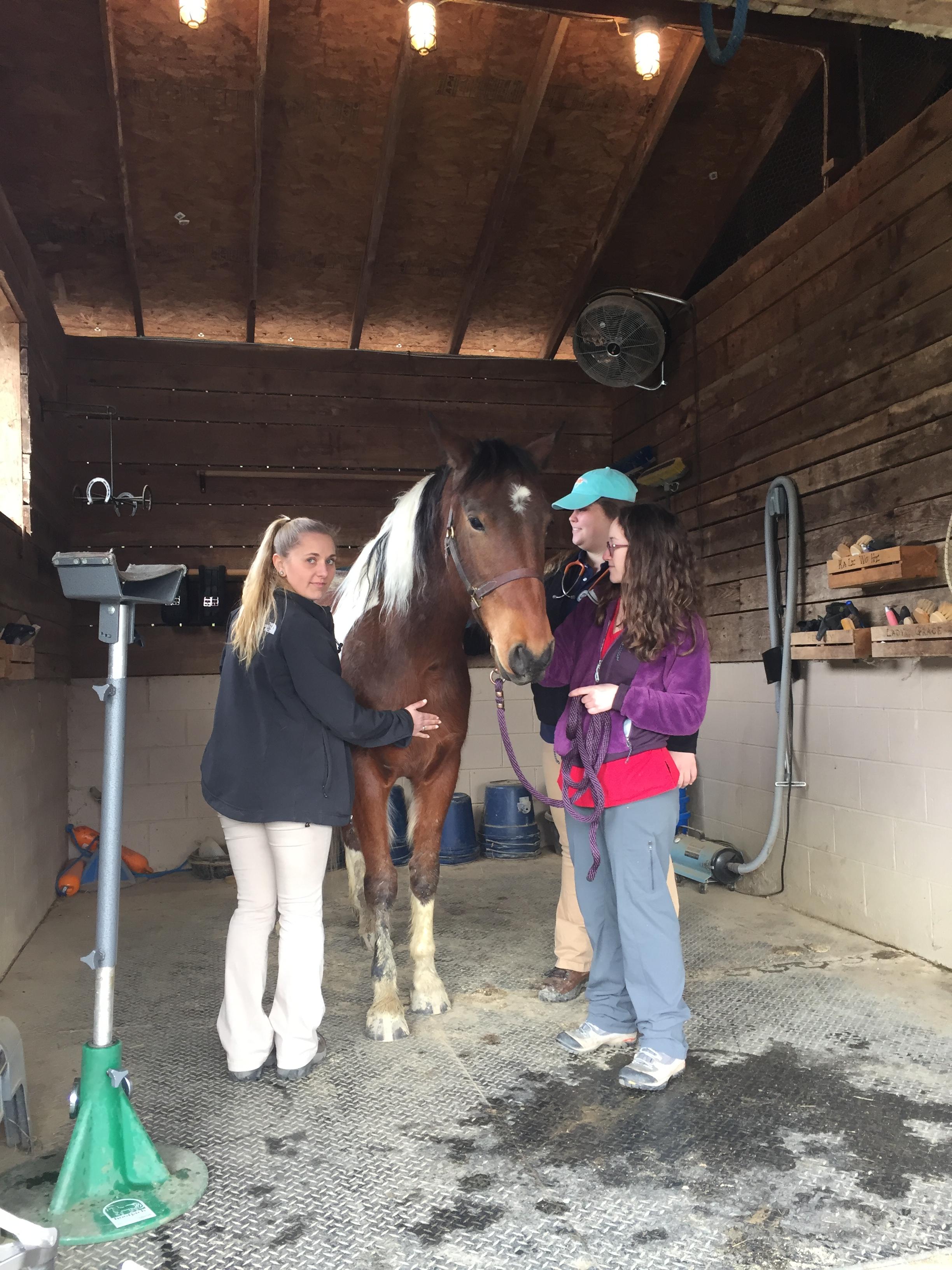 Checking the body score! All photos by Esther Roberts.

Horse ownership is a combination of many things. The art of riding. The technology of modern tack and apparel (I mean, whoever thought there would come a day when a hi-tech, moisture-wicking, UPF/UV longsleeve shirt would be cooler than your favorite tee?). The science of good nutrition.

Numbers don’t lie, so the saying goes. Unlike most aspects of horse ownership, which can be maddeningly vague (“ride with feel,” “breathe deep and you’ll sit deep,” etc.), mathematics provide us with hard data. And sometimes that hard data is hard to take, such as when a dressage test felt like an 80% but the test score is nowhere near that percentage.

Last year, like many years before, I was on a mission to lose weight.  I had a weekly weigh-in for accountability and I still do.  Numbers don’t lie. 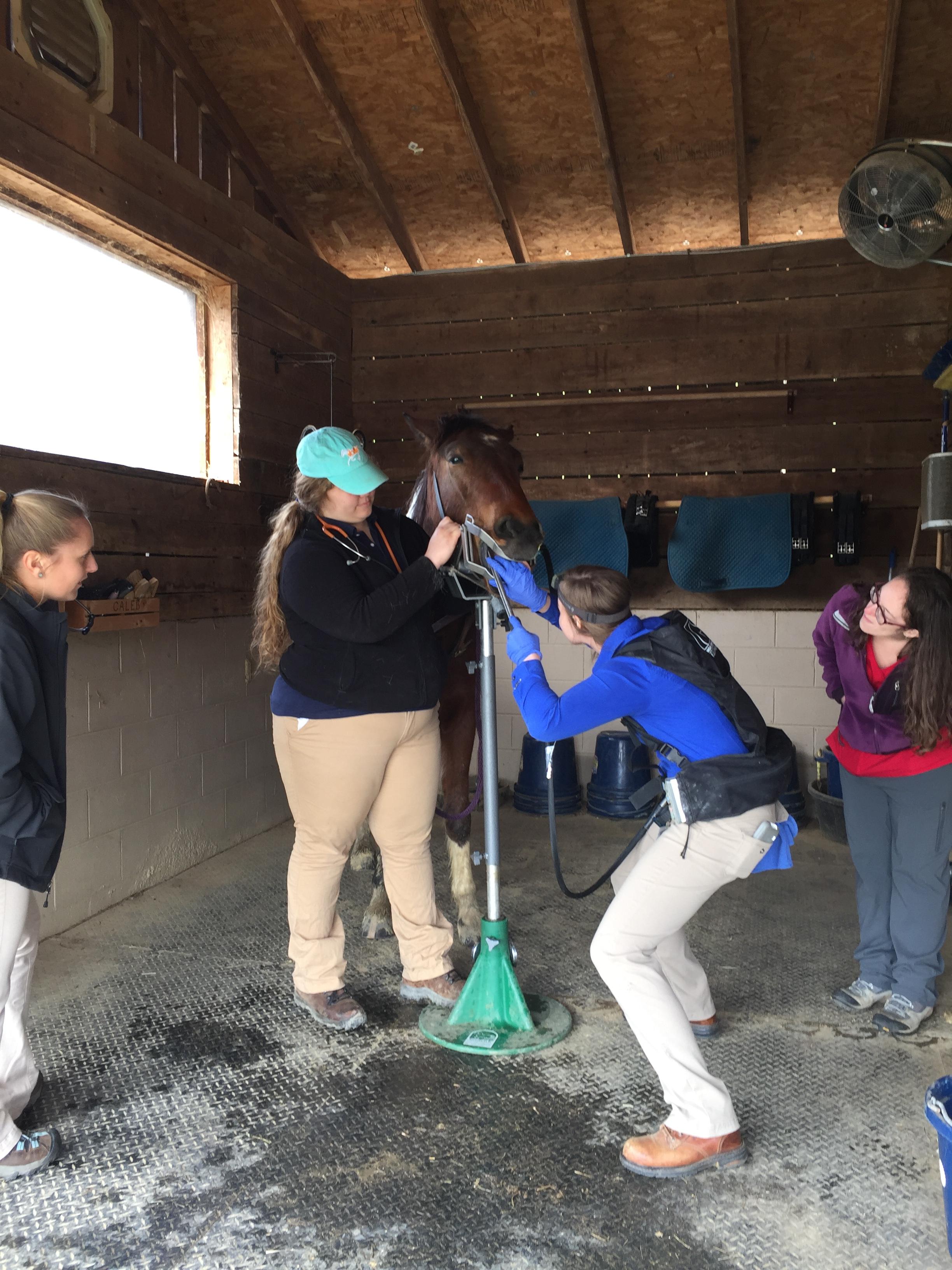 Last year at Kaliwohi’s annual vet visit, his body score was a seven. I was stunned and shocked to realize I had a four year old mustang who was more than an “easy keeper” or “a bit pudgy.” Kaliwohi, like me, was overweight and badly so. Numbers don’t lie.

So in May of last year, I finally found what would motivate me to buckle down and finally commit to getting my own weight off: my horse was depending on me to get HIS weight off.

Yes, I could have put a grazing muzzle on Kiwi, but it would have been of little usefulness. My farm is in the foothills of the Great Smoky Mountains, so I have trees and steep hills galore, but not much grass. While visions of rolling green pastures are idyllic, they are far from ideal for some horses – especially mustangs.

The American mustang has evolved to have a metabolism that can thrive on scrub in the desert, so most of these horses need no grain and very little hay. That’s easy on the feed bill, but challenging on the horse’s mental state, especially when Kiwi lives with three other horses who get to eat a lot more than he does.

I could have put Kaliwohi in a dry lot, alone. Again, the weight would have melted off quickly, but he would have been very unhappy alone.

So I decided to try one approach for both Kaliwohi and me. “Slow and steady wins the race,” and that’s the adage I’ve kept in mind all these months now.

I decided to gradually decrease Kaliwohi’s caloric intake and, just as gradually, up his fitness regime. I decreased Kaliwohi’s feed to literally ¼ cup in the morning, just so he would not feel left out when the other horses get fed.

I’m a big fan of letting horses live as naturally as possible, so these four horses are turned out to eat hay together during the day.  Typical horse husbandry teaches us that whenever feeding a herd together, put out one additional eating station (whether flakes or feeders or whatever) than the number of horses in the herd.  This cuts down a great deal on fussing and potential injuries as the alphas run those lower in the herd pecking order from one feeding station to another.

Kaliwohi is the “omega” in his herd of four; my retired dressage diva, Lady Grace, is the herd’s alpha mare. So I’ve learned to use herd dynamics to my advantage regarding Kiwi’s weight loss. Instead of five feeding stations, I only put out four flakes of hay – one for each horse. As Grace gets bored, she moves to another flake and the other horses, in turn, shift to other flakes. This “round robin” system means Kaliwohi is getting moved from one flake to another, again and again. This helps simulate grazing behavior, as Kiwi has to meander between bites and not just stand there and chow down.

Last year, since Kaliwohi was four, his formal training began. I first worked him in the round pen and then gentled him to ride under saddle. We worked mostly in the dressage arena, but he got introduced to a little trail riding as well.

When I am working with a young horse, I am actually more concerned about conditioning their mind than I am about conditioning their body. Overworking a young horse to produce a fit riding machine, without simultaneously building a bond of mutual trust and respect (and, hopefully, a reasonably eager work ethic), is not at all my idea of classical horsewomanship. My goal is to wind up with a trusting and trustworthy riding partner. So I worked Kaliwohi regularly, but never over-worked him.

I do not have livestock scales on my farm, so I have no way of measuring Kaliwohi’s weight down to the ounce.  I have a weight tape, but it is challenging to get accurate measurements when my mustang is masquerading as a wooly mammoth in his shaggy winter coat. 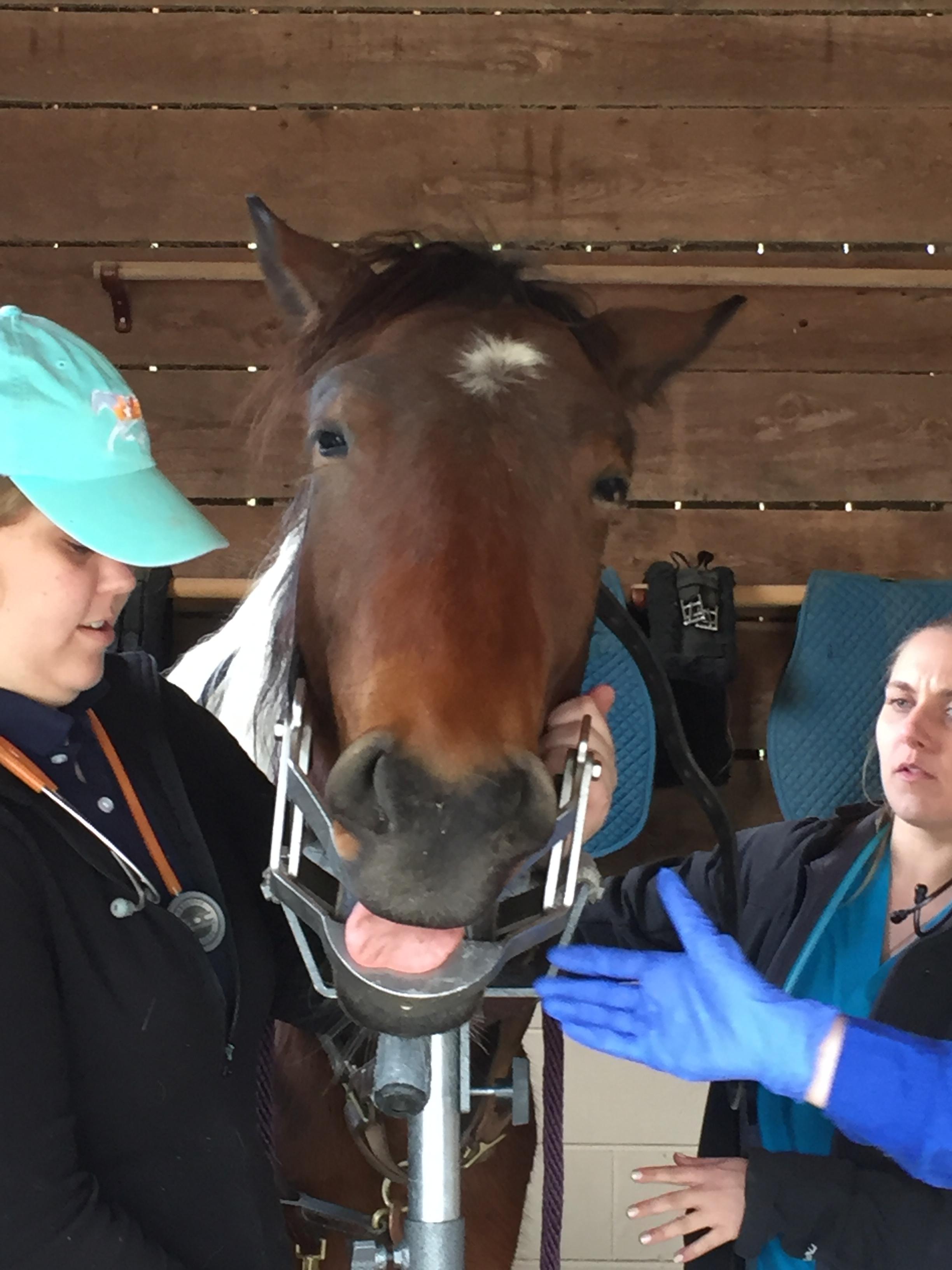 Earlier this week, Doc Martin came out to give Kaliwohi his annual work-up. Vaccinations, Coggins test, dental – the works. I waited with bated breath for Doc and his fourth-year vet students to pronounce their verdict as to Kaliwohi’s conditioning.

It’s winter. East Tennessee has had record rainfall, subfreezing temperatures, days with high winds. I’ve not been in the saddle much lately and Kaliwohi has enjoyed his leisure days. I wondered if he had enjoyed them a little too much, and if his body score would be a seven again, or, horror of horrors, even an eight! I see this horse every day, and it is so easy to become blind to incremental changes.

I confess I got a little misty-eyed when Doc turned to me and said, “Six. Good job. Keep it up.”

Six. My beloved mustang has dropped a whole point over the past year! And he is happy and unstressed.

Kaliwohi and I continue on our “slow and steady” path towards losing weight and becoming fit, together. 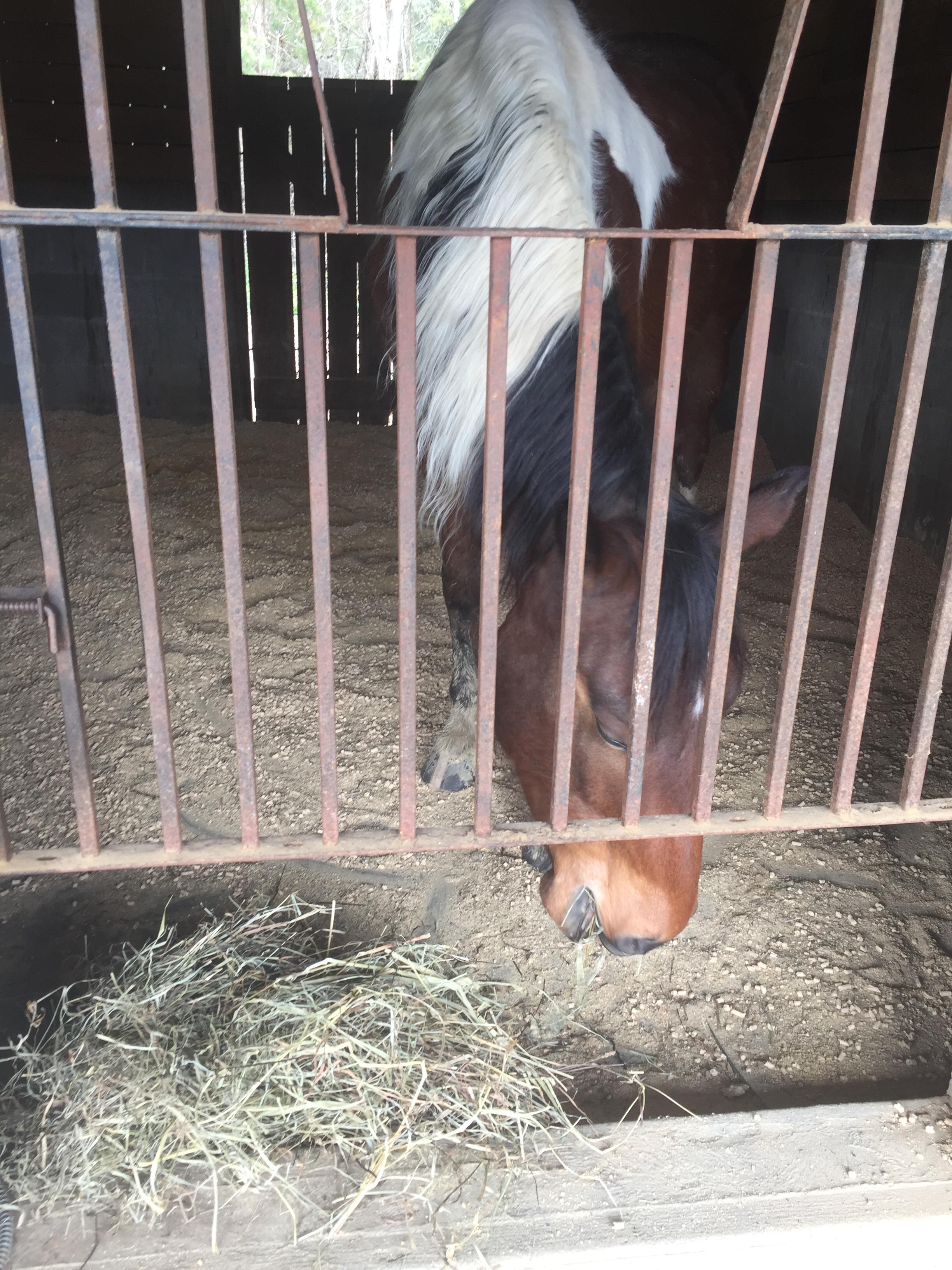 A rare treat for my “six” boy — a flake of hay all to himself!