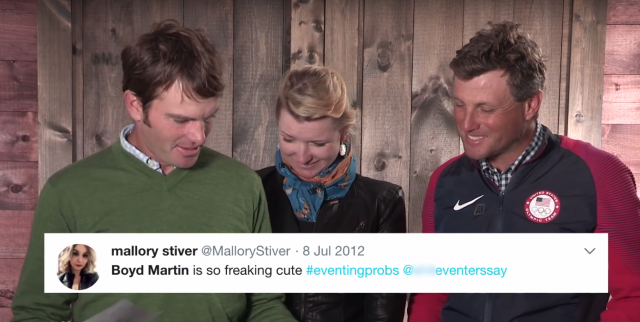 Jimmy Kimmel has made an art form out of celebrities reading mean tweets about themselves — there’s a series of clips of some of our favorite music stars, actors and comedians reading the worst of the internet if you care to search on YouTube.

In our equestrian world, our celebrities aren’t necessarily mainstream… but that doesn’t mean we don’t still tweet about them! When Team SmartPak dressage rider Silva Martin, her eventing husband Boyd Martin and fellow Aussie eventer Ryan Wood stopped by the SmartPak office recently, SmartPak decided to have a little fun, and took a stroll through Twitter to see just what fans were saying.

No mean tweets here — just the nice ones. Or is that the “super fangirly” ones? We’ll let you decide.

This is how to make Boyd Martin blush. Good to know.