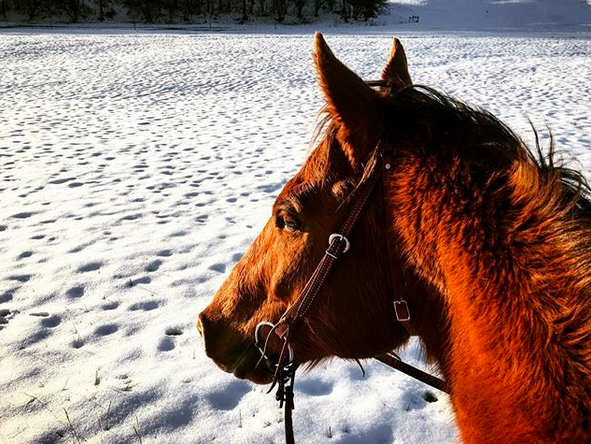 How does a mouse eat an elephant? 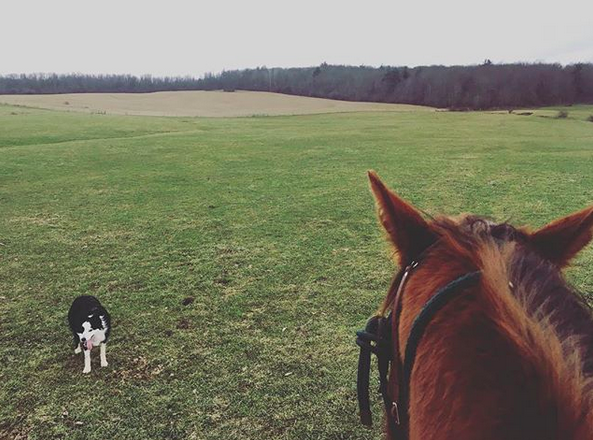 Wide open spaces (plus a border collie with personal space issues). All photos by Kristen Kovatch.

It’s been exactly a month since my last OTTB Cow Horse Chronicles entry, in which I’m documenting the transformation of an off-track Thoroughbred — Jobber Bill — to a working ranch horse on the family farm, and perhaps a foray into the show ring as well.

One month offers 30 days (well, technically, 28, since it was February) and 30 opportunities to saddle up and ride to move forward towards our end goal of a useful working horse with three balanced gaits. Here I am now, slowly digging out of a wet, heavy foot of nor’easter snow that dumped on us overnight, looking back on that month of potential, wondering if we’ve made any progress at all.

Jobber hadn’t done anything particularly wild — he expressed some displeasure a few times at working away from his herd, which he demonstrated in some rear/spins back towards the barn. To me, this was an indicator that there was a lack of trust in me as his rider and partner; it certainly was enough of an expression to rattle me. We chunked down the big question — will you work safely with me away from the barn? — into a series of easier, bite-size pieces.

This concept of “chunking it down” is a direct and much-repeated reminder from Robyn Hood, a senior instructor of TTouch and a regular clinician at the Bitterroot Ranch in Wyoming where I worked for several years. We started each year’s crop of four-year-old homebred Arabians in this clinic, and by the end of a week all of our brains were often a little cooked: both the horses, and the humans, who struggled (moreso than the horses, at times) to grasp all of these new concepts.

“Chunk it down!” Robyn would call across the corral of horses and handlers, spotting frustration in a nanosecond and coming to our rescue time and time again. Instead of trying to lead a horse without resistance through a complicated labyrinth with a series of stops and tight turns, we would chunk it down — one turn and a halt, stop, praise. If we needed to, we would exit the exercise, circle off and try again, or move to something completely different, then re-approach later. We’d add a bigger chunk, then a bigger chunk. In other words: how does a mouse eat an elephant? One bite at a time.

For most of February, I worked on chunking down that big question into a series of smaller asks. We worked in a cover crop field under saddle within sight and sound of the rest of the herd (and were even able to get in some trotting and a bit of one-sided cantering on the nicest, driest days). We gradually expanded our orbit of the barn to the winter cattle lot, pushing cows around the field and working over that area’s natural obstacles. And gradually, one step at a time, we worked our way into the wide expanse of the large cow pasture, with the promise of hills to build Jobber’s top line calling me like a siren song.

About a third of the way across the valley floor, we seemed to plateau: Jobber’s “anxious mouth” would take over. In a very characteristic and easy to spot fashion, he likes to poke his nose to the left and start champing the bit. Early in our partnership I thought he was being evasive; later on I learned to recognize this as a sign that he’s starting to get concerned. When the concerns go unaddressed, the reactions get bigger, and then bigger.

A braver trainer would perhaps be able to push through this anxiety, bolster the confidence of the horse from the saddle and take all of this in stride. For heaven’s sake — all we’re doing is walking, after all. Why was this turning into such a personal challenge for us? In equal parts, I didn’t want to have to be “that guy” that babied a horse through every new experience or horse show grounds, while I also didn’t want to see how far I could push myself and my horse before one of us had a total meltdown.

We went on a long hike the next day, going back to familiar exercises (yielding the hindquarters, backing and sidepassing) whenever Anxious Mouth made its reappearance. We hiked up and down hills in the big pasture. We crossed creeks. We went down into Spooky Hollow, a portion of the pasture tucked away at the head of the gorge where the hills and trees seemed to press in particularly close. We went for a jog.

And the next day, I chunked it down. Jobber and I rode out into that big field again and marched confidently up and down the far reaches of the hills. When he got anxious, I vowed to take just one more step, one more step, then went to something familiar and came back. We worked our way into Spooky Hollow and back again. 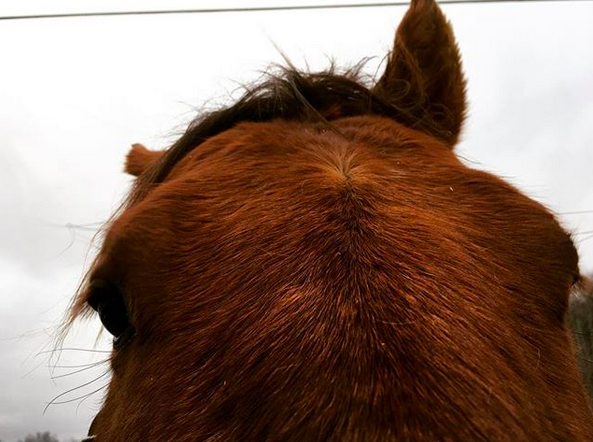 Since then, we’ve been able to get to those hills, trot across the valley on a loose rein, work our way into that ever-spooky hollow and cross the creeks. Jobber’s herd tendencies are not “cured” — he’s still very much aware of which way home lies and Anxious Mouth still pops up from time to time. But with a greater awareness now of the strategies I can use to chunk down a big question into a series of smaller, easier steps, I feel like we’ll be able to increase our independence, which I hope will transfer into new experiences at new facilities and events if I choose to go horse show.

Training a horse is not linear. It’s not even a squiggly line working generally in a linear direction. Training is cyclical, and these issues are not simply obstacles for us to leap over; our orbit will move far away and then back again. The important part is that I recognize this and accept it as part of the process.

Ultimately, “chunking it down” was not just for Jobber. It was also very much for me. The problem that originally loomed so large, menacing my self-confidence in the saddle, simply had to be broken down into smaller easier steps.

How does a mouse eat an elephant? One bite at a time. 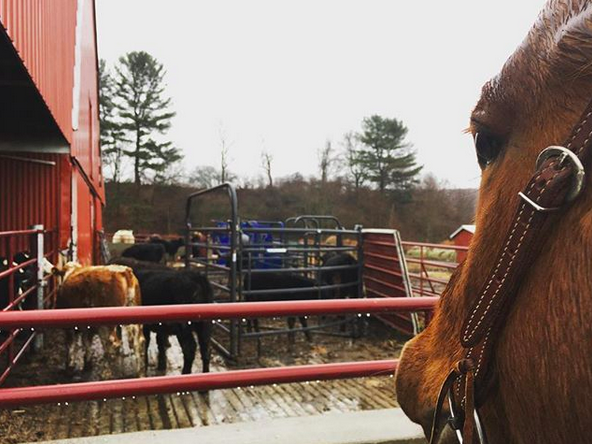 Watching cattle get sorted in the pouring rain.