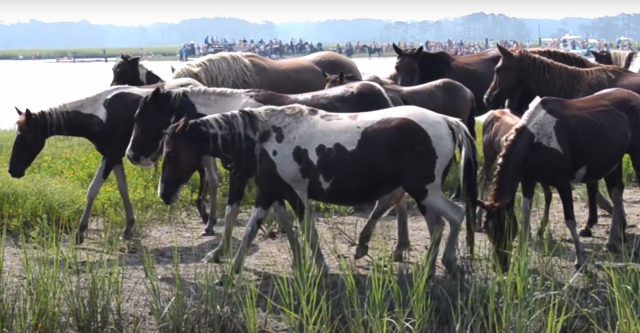 If you’ve never been lucky enough to stand on the banks of Chincoteague Island as the famous pony swim takes place, console yourself with this highlight video from the 2016 event!

The Chincoteague Pony Penning and Swim has formally taken place almost every year since 1925, and has been famously immortalized in Marguerite Henry’s book Misty of Chincoteague.

On the last consecutive Wednesday and Thursday in July, the “Salt Water Cowboys” of the Chincoteague Fire Department round up and drive the herd of about 150 ponies across the channel from Assateague to Chincoteague Island. Once on Chincoteague, the ponies are driven to pens and older foals are auctioned off to the public — both as a fundraiser for the volunteer fire department and to manage herd numbers.

Some of the auctioned foals will be designated as “buyback horses,” meaning that their purchase price will be donated to the fire department and the foal will return to the herd to ensure the population continues to thrive. Heavily pregnant mares or mares with young foals are separated from the herd prior to the swim and trailered across the causeway from Assateague to Chincoteague.

Watch the highlights from the 2016 Pony Swim as the herd crosses the channel at slack tide and makes landfall again on Chincoteague:

The Chincoteague ponies are certainly a colorful herd!

Assateague Island straddles the boundary between Maryland and Virginia, and a fence separates two pony populations on the island. The Virginia herd is owned and managed by the Chincoteague Fire Department, and ponies are rounded up twice a year to receive vaccinations and routine deworming. Numbers are controlled through the Pony Penning auction.

The Maryland herd is referred to as “Assateague horses,” and those ponies are treated more like wildlife; the herd has been a prime population for scientific study of horses in wild conditions with population managed through the PZP contraceptive vaccine.

Have you ever attended the famous Pony Swim? Share your story in the comments section!