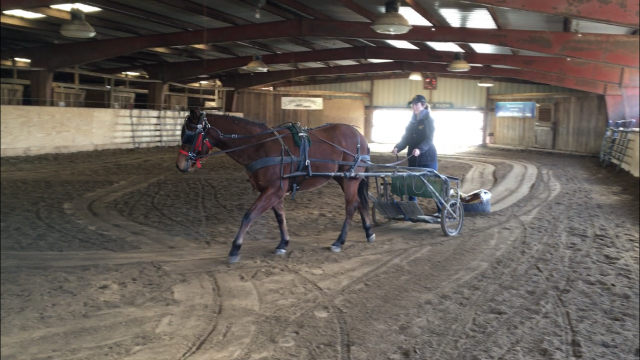 Haley works through some challenges in colt starting. 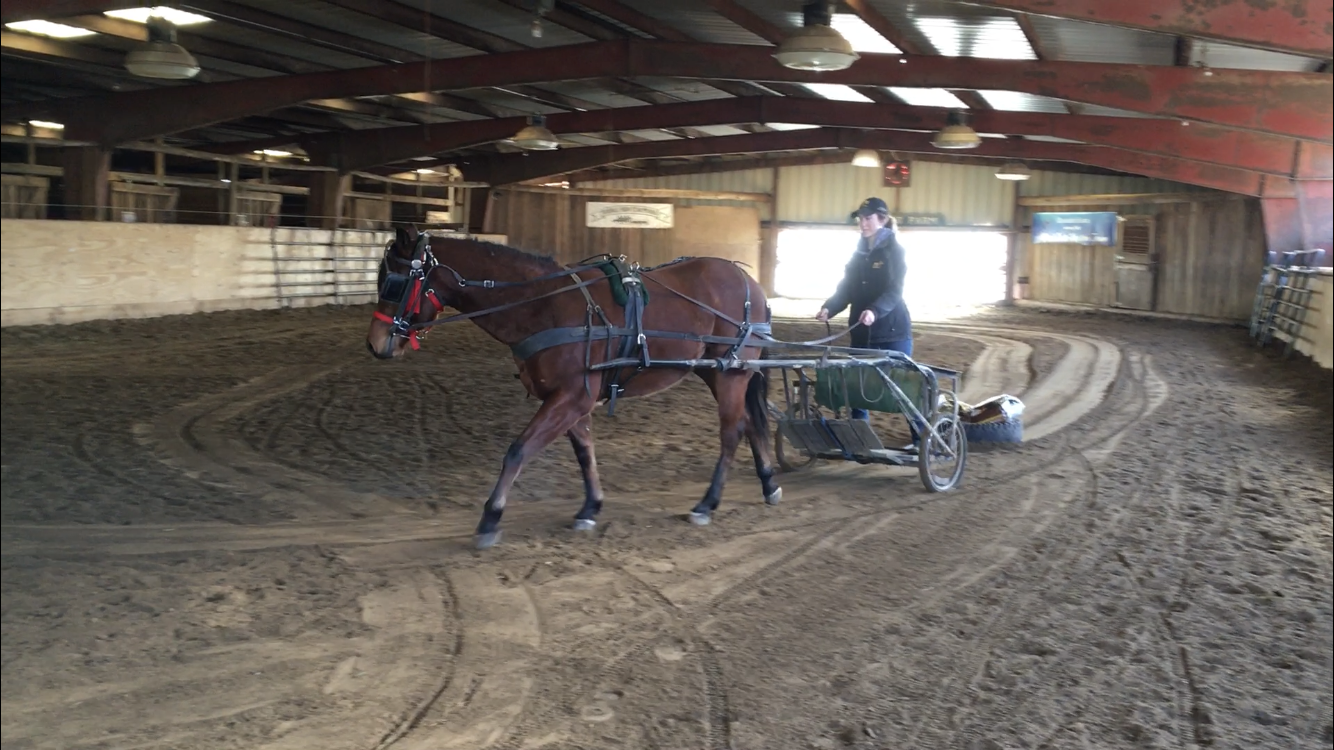 It’s one thing to expect obstacles in horse training, and another thing entirely to encounter them. Last week in my independent study Colt Starting class, under Harry Hurd’s guidance, I hooked Slide up to a lightweight cart and drove him for the first time. We’d been long-lining for several weeks, working on moving off rein and voice aids, but hitching him to a cart felt momentous — the addition of a wheeled vehicle to the configuration of harness and driving lines I’d only just begun to manage without getting tangled would be a challenge at least for me, if not for Slide.

He stood quietly, with my friend and classmate Ellie holding him, while Harry showed me how to hitch him to the cart. When Slide was secured, Harry had me walk behind the cart and ask Slide to walk while Ellie led him forward. To his credit, my coming-two-year-old was completely unfazed by the addition of the cart behind him and walked off quietly, steering like he was already used to the pressure of the harness and cart. After one lap without incident, Harry told me to step up on the back of the cart, and after a lap of that he told me to jog Slide.

Because I have little driving experience (and Slide had none), I couldn’t help but expect something to go wrong, for Slide to spook or suddenly realize that he was hauling a racing cart with me perched precariously on the back. Slide did not set a foot out of place for the duration of that first day driving, and by the end of our ten-minute drive I was grinning as we jogged around the arena. We joked later that Slide would be ready to plow the fields come spring, and he plodded back into his stall like an old cart nag when we were done. He stood quietly in his stall to be groomed and then tore off through his paddock, proud of himself, when I turned him out. 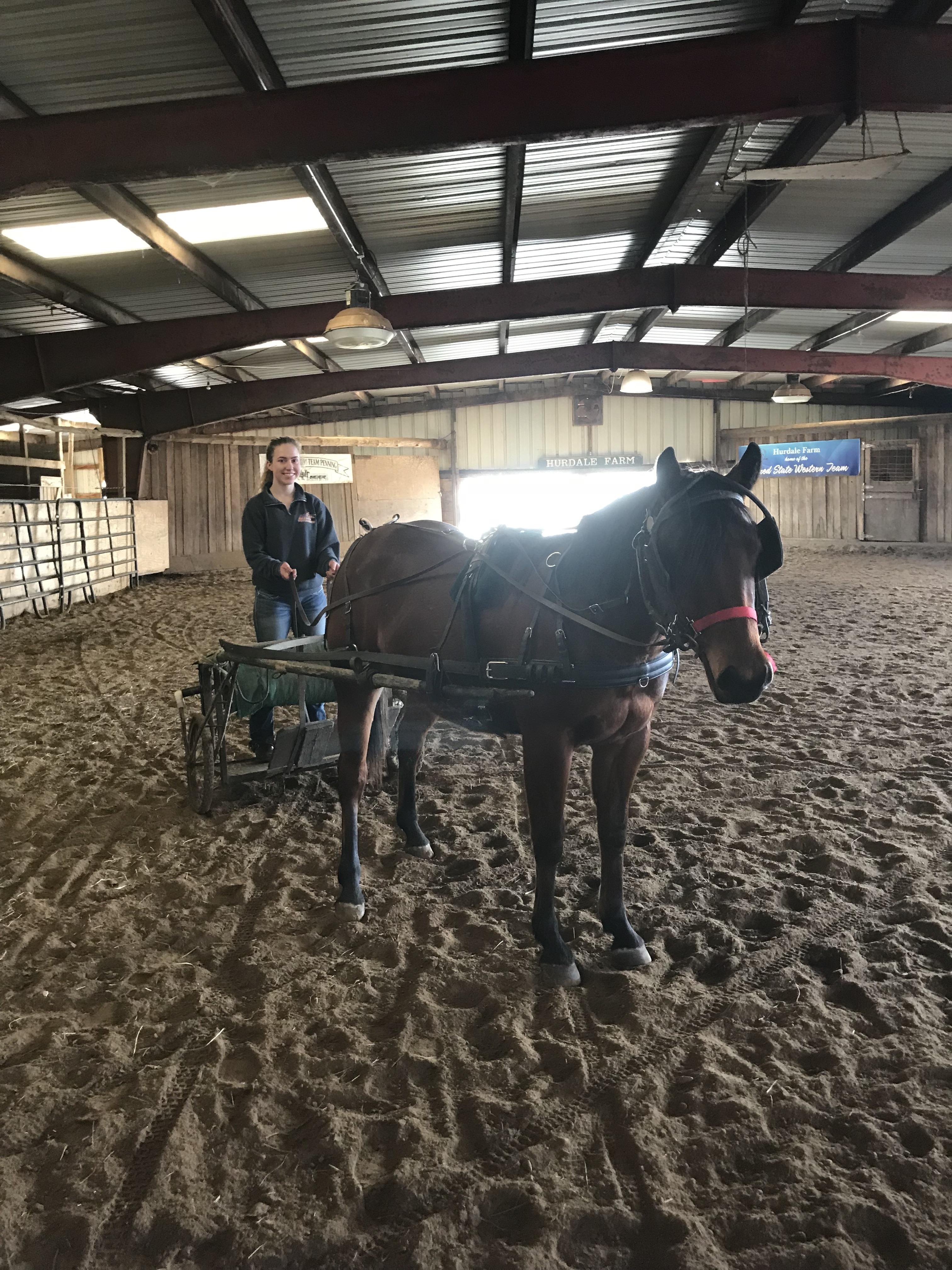 In the beginning of this week, Harry planned to have me drive Slide again, this time with the addition of a tire hooked to the back of the cart to add a little more weight. This would prepare Slide to transition to a training cart rather than the lightweight Standardbred racing cart we started with. Slide hadn’t been worked in several days, due to my hectic Friday schedule and horse shows both Saturday and Sunday, so he was more fresh than he was the first day I drove him, and it showed. I struggled not to get frustrated with him when he resisted my rein cues or tried to twist himself crooked instead of stepping forward when I asked him.

Recognizing that I was overtired from a weekend of horse shows and working with my colt for only his second time ever on a cart, I forced myself to step back and reevaluate before responding to any of Slide’s antics — it wouldn’t do either of us any good to get frustrated with each other, and my goal is always to make Slide’s training experience a positive one. Something Harry says, a piece of his cowboy wisdom, rang true for me today: when you first start working with a horse, they learn a lot very quickly, but after a while you won’t notice as much progress because you begin working on more intricate cues that take longer to process. I thought of this even as I lost my balance several times and tipped back off the cart, got us almost jammed into a corner, and managed to hook my own driving rein around the cart frame

Slide has learned so much in such a short amount of time that, despite knowing this, I’ve begun to expect that out of him every time I work with him. This week, I was confronted with the reality that starting each day with high expectations does more harm than good. I am grateful for the willingness and good-natured attitude Slide has shown so far, and even though parts of today were rocky, I choose to look at it as a success anyway — he pulled the tire and cart with his usual quiet eagerness, forgave me for losing my balance and catching myself half on the cart and half on the reins, and stood like a gentleman to be un-harnessed and brushed, unfazed by the barn cats fighting, the wind sweeping through the barn, and the pieces of harness flopping everywhere on him.

In moving forward with Slide, I want to make sure I don’t lose sight of the qualities outside of his performance in the arena that make him such a pleasant horse to work with, and walk into the barn with no expectations every day so that he can exceed them.