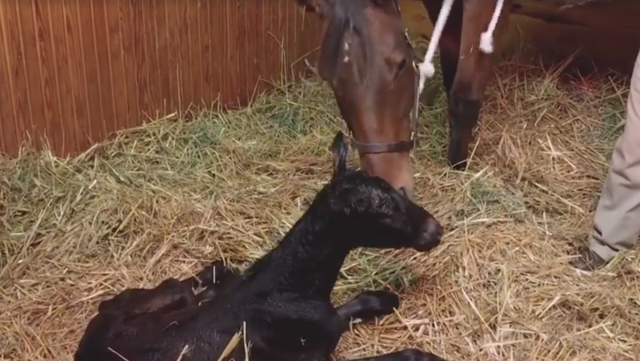 “Queen B,” that is, multiple stakes-winning mare and fan favorite Beholder, delivered her first foal at the end of January, a colt by Uncle Mo.

Breeding a champion isn’t as easy as picking the best mare and the best stallion and by arithmetic, getting the best foal — there’s plenty that has to happen from the genetics to raising the young horse to training and conditioning, not to mention plenty of luck.

But if it were down to the resumes of the parents entirely, this little guy seems destined for greatness: he’s sired by Uncle Mo, who was himself an undefeated juvenile champion who has gone on to sire champions (such as Kentucky Derby winner Nyquist); his dam is none other than Beholder, the beloved champion multiple stakes-winning champion mare. With parents like these, this little guy certainly has plenty of expectations to live up to.

That said, for now, he gets to just enjoy being a young horse, frolicking at his mother’s side at Spendthrift Farm:

Catch a sneak peak into the life of Queen B & her colt from his first whinny to enjoying time in their paddock! Head over to the new and improved championbeholder.com for never before seen photos and her most recent blog post. Guess what? The new website allows for comments on posts and the ability to subscribe to her newsletter – you can be the first to know about all things Beholder! -Team Spendthrift #QueenB

This colt, in Thoroughbred tradition, isn’t named yet — and the Spendthrift team are offering fans the opportunity to be a part of that process! Click here if you have a great name in mind for this little guy and submit your suggestions.