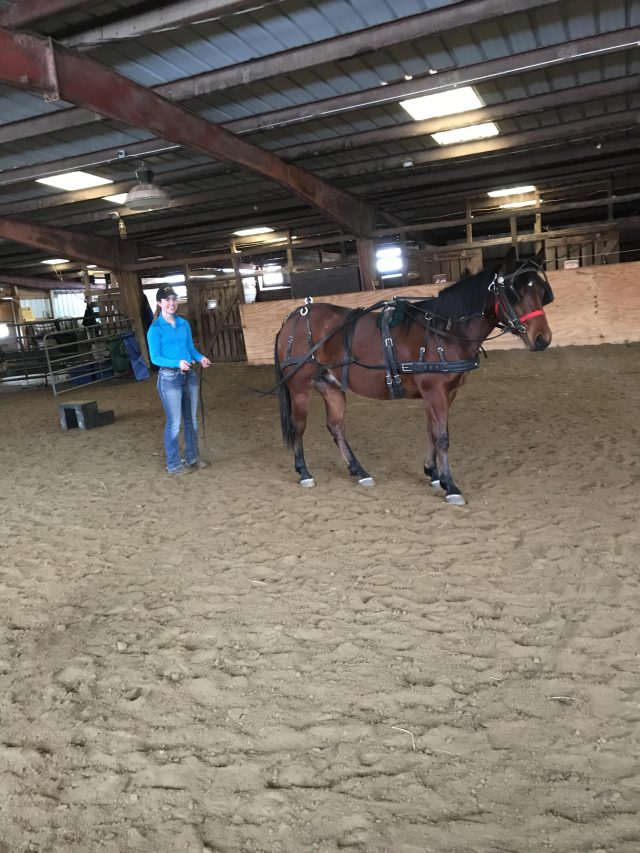 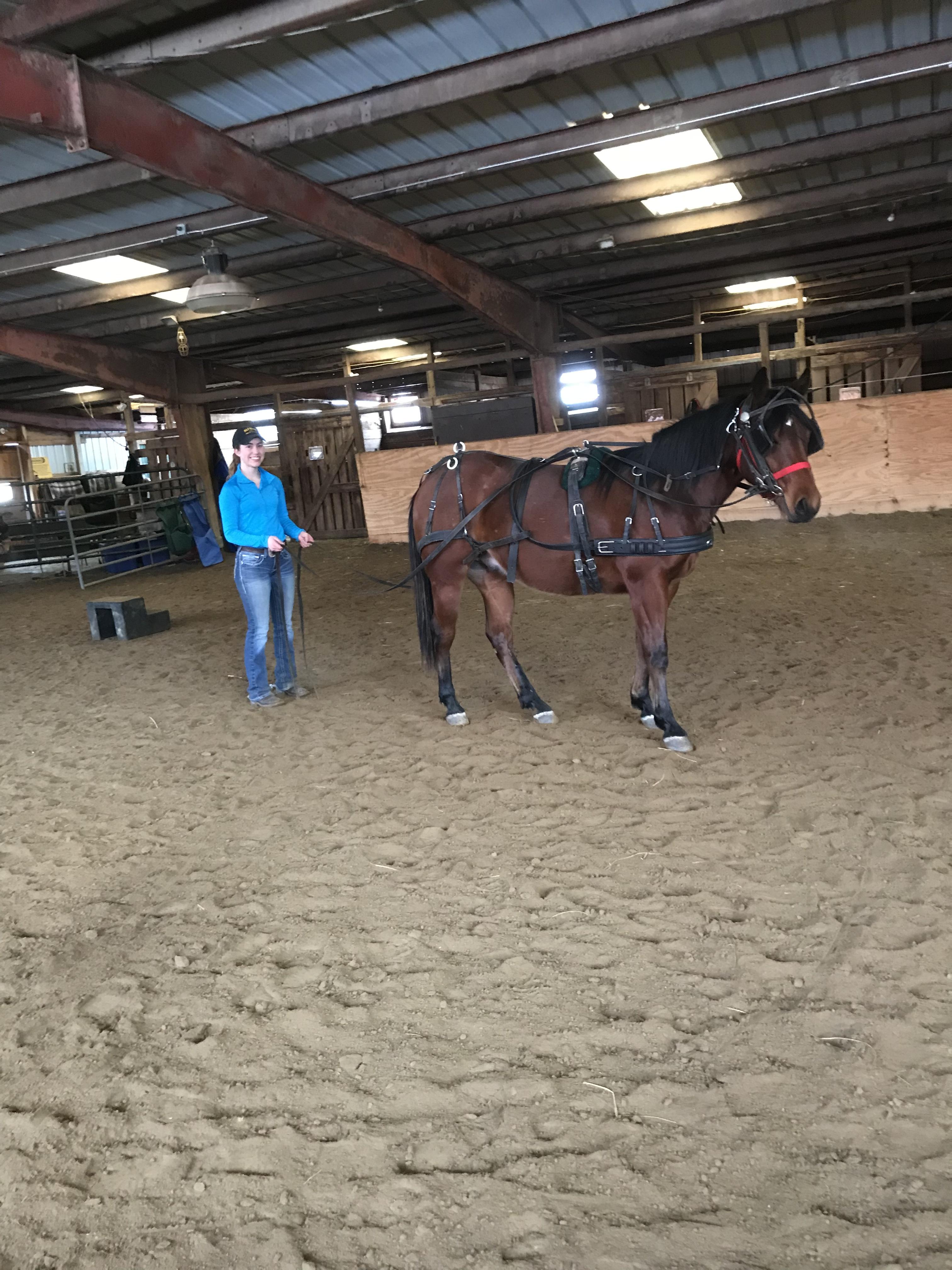 In training a young horse, you have to expect setbacks and have the patience to work with the horse rather than forcing him into something he’s not ready for. In my independent study Horse Training class with my friend Ellie Woznica, taught by our coach and mentor Harry Hurd, we are building a solid groundwork base with our two colts, Slide and Q. Although I started Slide with groundwork basics and desensitizing before bringing him to school, he’s progressed quickly within the first few weeks already, picking up round penning and ground driving like he’s done it all his life.

Under Harry’s constant supervision and guidance, Ellie and I have learned as much or more than Slide and Q in the first four weeks of class. We’ve covered the importance of gaining the colts’ absolute respect and worked on moving their bodies from the ground, getting them used to a saddle and bridle, round-penning, light lunging, and long-lining. Harry’s calm cowboy wisdom, bestowed quietly when Ellie and I are struggling to get our colts’ cooperation, makes me work even harder in the hopes that someday I might be close to the caliber of horseman he is.

Inherent in the cowboy wisdom are, of course, cowboy jokes. This morning, he showed me an investment proposition for breeding snakes and cats to produce self-skinning cats and selling their fur, signed U.R.A. Sucker. When we jog behind the colts while ground driving, he peers up over the rail to ask, “Are you getting run away with, or trying to keep warm?” Harry’s balance of serious instruction with humor works to keep both people and horses settled — you can’t hang onto pent-up frustration while laughing.

We work tirelessly at consistency and hope for visible improvement every day, but as our colts’ skills increase, there are days when they behave well but aren’t noticeably better than the day before. Rather than push us and the colts to do things we’re not ready for, Harry instructs us to keep their minds busy and change up the routine so they don’t get bored. Even if we can’t see it or measure it, we make progress every day that we show up to the barn at 8 AM, not always bright-eyed and bushy-tailed but attentive and with a strong desire to learn from the best.

This morning, Slide had his first experience with the driving bridle and blinders, which he took like a champ, plodding out of his stall like an old cart nag resigned to his lot in life. He was so unconcerned that we chose today to back him into the training cart. Harry walked alongside him, holding onto one of the traces, while I stood behind the cart and ground drove him like we’d been practicing. To his credit, he never acted alarmed, but took baby steps in a full lap around the arena, where we stopped and extricated him, ending the morning on a positive note.

There is a certain confidence that comes with knowing you are starting a horse the right way from the ground up, which I find reflected in my attitude even outside of our training class. If my coming two-year-old gelding trusts me enough to walk as instructed while wooden poles bump into his sides and he can’t see me, I must be doing something right. If I can (with Harry’s help) train a horse, shape the will of a thousand-pound animal to match my cues, I can do anything. 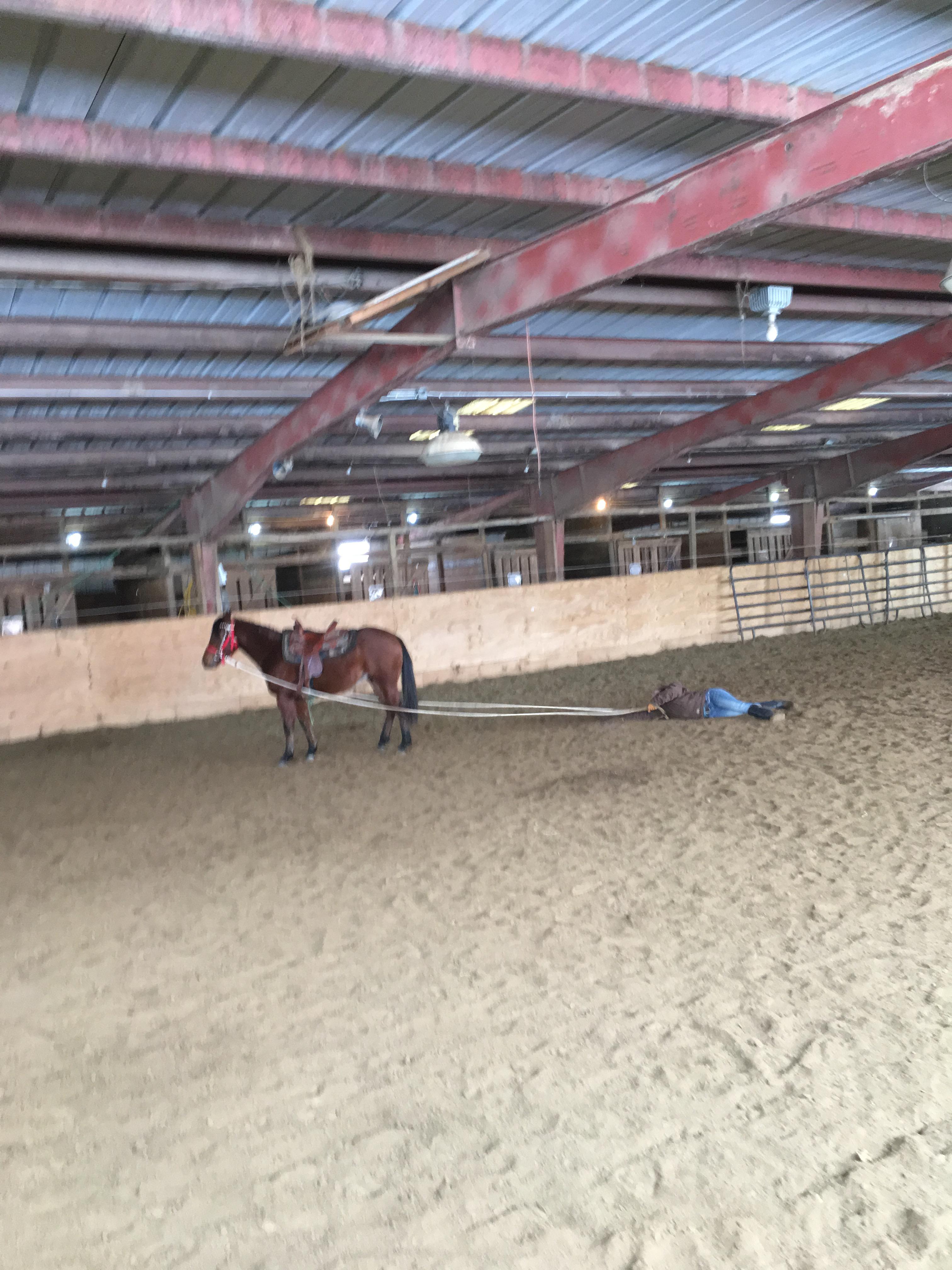 Harry took the picture attached–he said that Slide was doing so well long-lining that he wanted a picture of us, so naturally I had to lie down and act like he was dragging me for Harry to take the picture. I haven’t even ridden Slide yet, and already he looks SO done with our shenanigans.