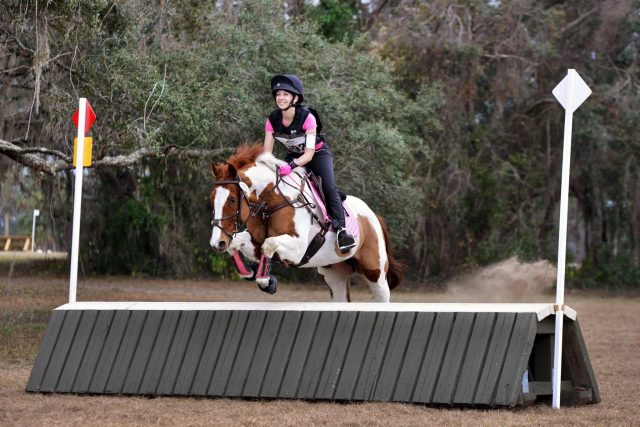 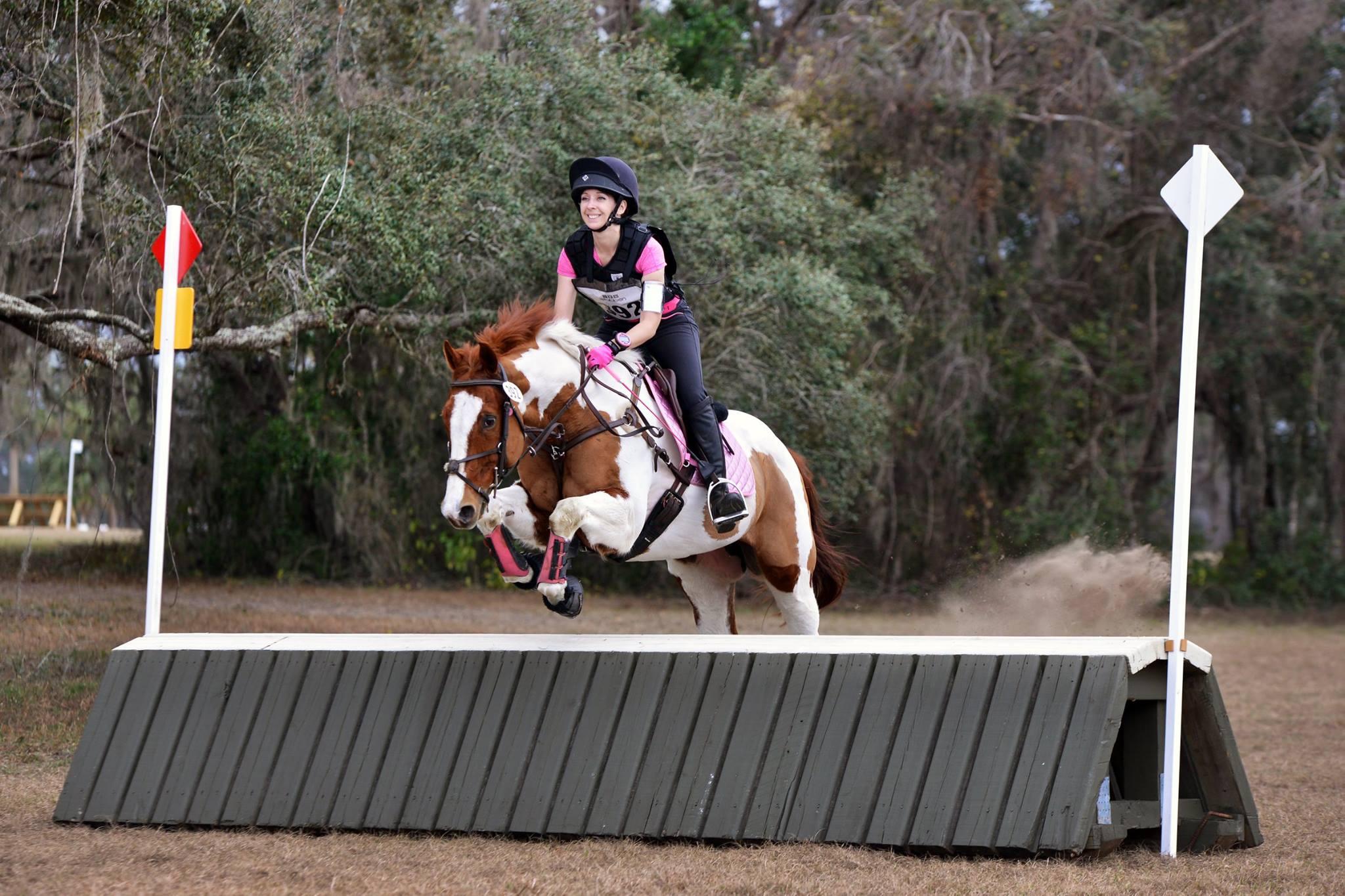 A golden opportunity ended with a golden finish. Photo courtesy of Xpress Foto

I’ve spent the last three weeks avoiding adulting in the Sunshine State, and it’s been awesome. JJ has been doing really well, I went to the Don Garlits Museum of Drag Racing (a bucket list item for a racecar enthusiast like me!), hung out with lots of my local friends, and visited the beautiful Silver Springs State Park where I saw birds, gators, monkeys, manatees and more (a public Facebook photo album is located here for anyone interested).

Prior to coming down to Florida, my host and 4* rider Katie Ruppel mentioned she was going to the Rocking Horse Stables horse trials, and I was super excited to have the opportunity to get back to USEA recognized eventing after our last event, nearly 2 years ago. Now, JJ has recovered from his injury and I recovered from mine as well, and we both were eager to pick up where we left off.

The forecast for the weekend looked good, JJ felt great, and I was feeling hopeful. Since my trainer back in Georgia, Miriam Offermanns of Milym Equestrian, recently had a baby, I hadn’t had a lesson in about two months. When I arrived at Rocking Horse on Saturday morning and went to the show office to fill out my signature page, I was able to ink my name as the rider, owner, and trainer – a moment that filled me with equal parts pride and panic.

Katie was busy riding her three horses and I had basically just tagged along for the trailer ride (thank you, Katie!!) so JJ and I tried to stay out of the way and do our thing. When it came time for dressage, I tacked up and got on to let him walk around and explore his new surroundings a bit. He was a little curious, but I couldn’t fault him for that – he’s allowed to look, he’s just not allowed to react.

So, after a little tour of the property, we started our warm up and I could not have been happier. He was soft and light and much more steady in the bridle than he usually is (full disclaimer: I have been working SO hard at keeping my hands quieter, and it seems to be paying off!) and overall was just an absolute joy to sit on. As I waited for our turn to head in to the arena, I heard my name and was happily surprised to see my friend, Lindsay Barrack of Mahan Farm! It was great to see a familiar face, and we filmed a special ringside edition of “Will JJ Eat It?” so stay tuned for the video!

Soon, it was our turn to head down the center line and we entered at A with JJ looking fabulous and me with a big ol’ smile on my face. Things were going really well and I was really happy, up until the second canter. JJ knows the tests and sometimes gets so excited that he anticipates the movements and tries to “help” by doing what he thinks I’m going to ask. I love how sweet it is that he’s trying SO hard to be good, even though it usually doesn’t work in our favor. This time, he chose the wrong lead, but I couldn’t be mad. I just laughed it off, corrected it, and we kept right on truckin’.

After dressage, I pointed him towards the stadium ring so he could get a peek at the action and I could check to see if there were any jumps that seemed like they would cause a problem. Again, I was pleasantly surprised by running into another friend, Tiffany Smith, who I met in 2016 at an event at Poplar Place Farm. The jumps themselves seemed straightforward, but the course had a few lines that I wasn’t too sure of…

I parked JJ at Katie’s trailer and headed back to stadium to walk the course and get a strategy. Unfortunately, I had missed the last course walk and the next one didn’t work out with my ride time, so I opted instead to watch several rounds and walk around the outside of the arena to try and eyeball some trajectories on the tricky turns.

Several hours later, it was time to tack up again. JJ got dressed in his jumping gear, and we headed down to warm up where he was absolutely perfect. The idea of going into the ring without having walked it first would have unnerved me in the past, especially since we haven’t really done a legitimate course of this size in years, but since I was just there to have fun, I was able to go in feeling calm and ready.

I’ve learned not to look at my scores until after the event so that I don’t get excited (or disappointed) and blow it, but as we waited for the signal to start, I heard the announcer state we were currently 7th. Information I could have done without for sure, so I pretended I didn’t hear it and quickly deleted the thought from my head. Our course, while certainly not our best work ever, was surprisingly easy peasy. I was even relaxed enough to notice the photographer and give her a big ol’ smile as we went over jump #9, and we finished double clear to move up into 5th! 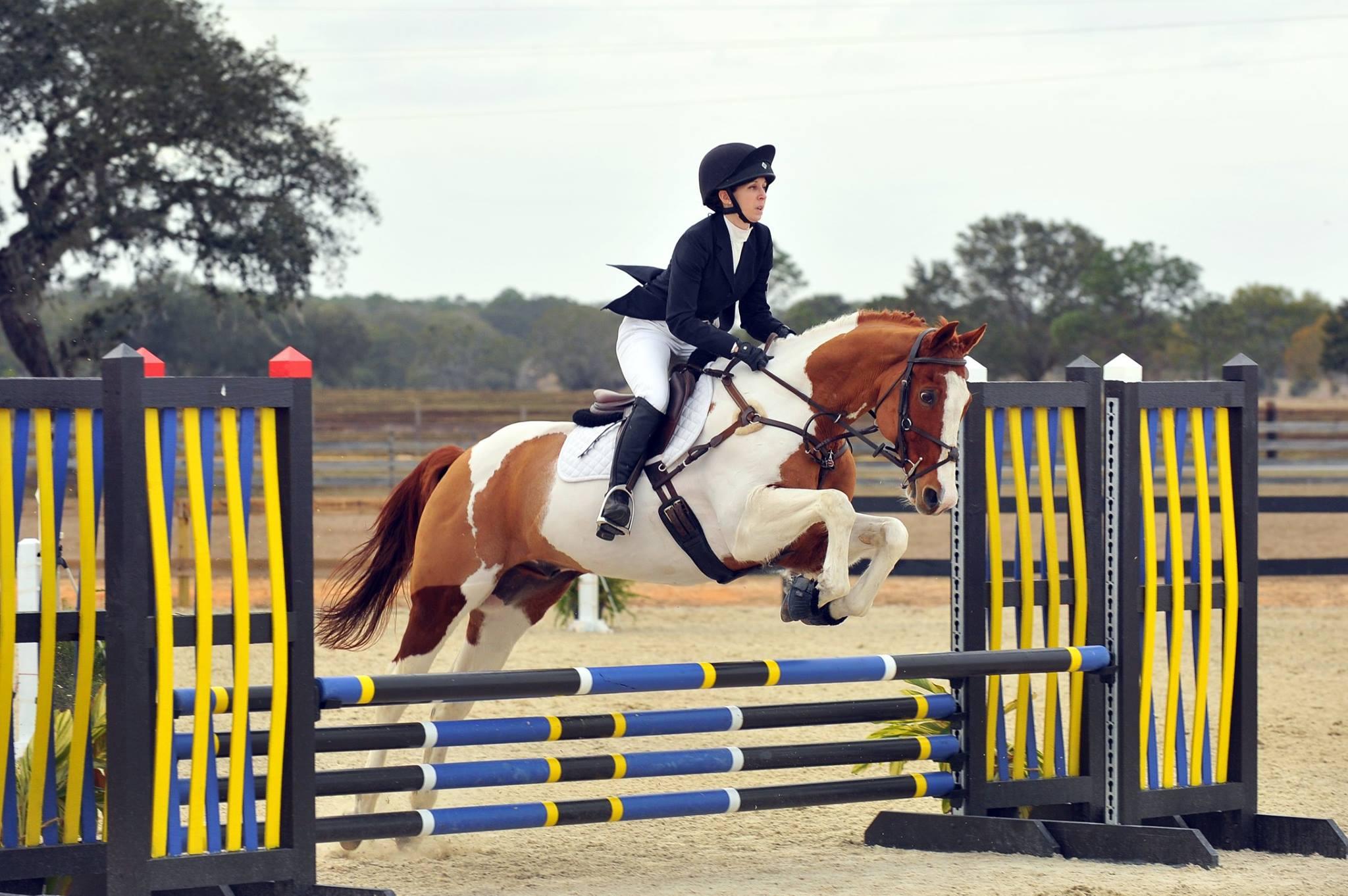 Katie did quite well in her divisions, and even brought home a blue in Open Preliminary! She had a prior commitment the following day with a client, but was kind enough to arrange transport for me and JJ through a friend of hers so that we could still run cross country and finish the event.

Sunday morning, Jeanie Clarke picked us up and we drove back to Rocking Horse. I had a great time chatting with her on the trip, and was looking forward to another fun day. Jeanie’s other client Rose had trailered in her two horses earlier, and after she finished up her Novice XC run, the three of us trekked out for our Beginner Novice course walk. Jeanie had some great advice, despite having never seen me or JJ ever before, and I made a plan for our run.

[Side note: I stuck JJ on the trailer so he would be secure while I was gone, and at first, he refused to load – normally, he will put himself on the trailer without any help, so that was strange. Then when I tied him, he whinnied forlornly with an upset expression on his face. The message was clear: “Mom! I don’t want to go home, I haven’t gotten to play yet!” So. Stinkin’. CUTE!]

With rain moving in, the event organizers pushed up the start time for XC by 10 minutes and offered to take riders out of order as they were ready. I got on, walked over, checked in, and warmed up with Jeanie supervising to make sure I didn’t have any spontaneous moments of stupidity. Everyone else had the same plan, too, and somehow my ride time wound up getting bumped back to nearly twenty minutes after the original time. JJ was jumping perfectly, as usual, but he was SO EXCITED about it being his turn that he got a little agitated. Usually he chills out and grazes, but he wouldn’t stand still and was busy chomping the bit. I had a feeling I was going to have plenty of horse.

When it was finally our time to “have a great ride”, JJ bolted out of the start box like a barrel horse chasing down the pattern. I made it clear that wasn’t how things were going to go, and he begrudgingly turned the volume down a notch.

Right from the very first jump, though, I knew we weren’t going to have any problems. Whatever I pointed him at, he locked on and tackled with full force. I think I actually yelled at him one point “HOLY JESUS, SLOW THE $%*# DOWN!” and then started laughing, because we were both having so much FUN! So, I let him run. Yeah, we had “discussions” about pace (as usual) a few times, but I was basically just a GPS up there showing him where to go while he did the rest. And I’m happy with that, especially since we finished double clear!

When the scores were finalized, incredibly, we had moved all the way up to third. THIRD! I almost couldn’t believe it! (And Jeanie’s rider Rose WON!) That was an amazing finish for us in a big group of 16, despite getting the wrong lead in dressage and with no coaching or lessons for two months, and really gave me a great feeling of validation. I’m incredibly proud of myself, and of JJ, for getting it done and for doing surprisingly well. We CAN do this. Now, it’s time to move back on up to Novice!

Throughout the course of the weekend, I kept running into one lady in my division, Tracey, who was riding in her first recognized event, and we had a few minutes to chat. She said she had noticed that people weren’t as friendly as she was used to at schooling shows, and that’s something I have noticed over the years as well. This sport is hard, and challenging, and frustrating, and humbling, and a million other things, so I always try to smile, say hello, wish the other competitors “good luck” and encourage them – I sure have needed that many times myself!

In a few days, I’ll be headed back to Georgia for a (hopefully not) freezing February and to resume life as usual. I’ve taken a lot of photos while I’ve been in Florida, but I think my favorite “souvenir” is this new, shiny, golden ribbon of glory.

I would rather be respected as a mediocre rider who positive and supportive of her fellow competitors than simply being known for being good.