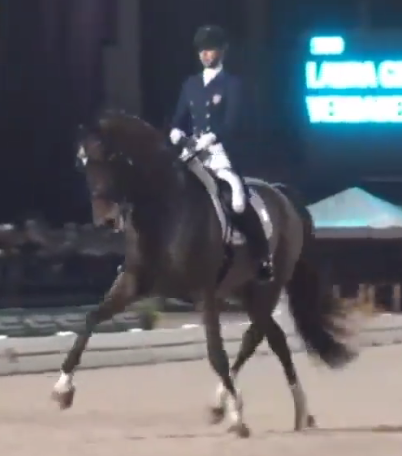 Ice skating, shmice skating: dressage is where it’s at.

Yes, yes, the Winter Olympics are exciting, the ice dancing is fun to watch, go Team USA… but while the rest of the world is focused on Pyeongchang, the eyes of equestrians are watching another superstar pair who is equally talented at a different kind of dancing.

Laura Graves chose the Adequan Global Dressage Festival in Wellington, Florida as her stage to debut her new musical freestyle routine with her superstar Verdades, known to his friends as “Diddy.” This performance won the class with an 84.37%.

Laura Graves and Verdades killed it with their new Freestyle!

Laura Graves and Verdades killed it with their new Freestyle! Who is ready for WEG?!?! #dressage

Did anyone else hear a few snippets of what we think might be the soundtrack from Rudy mixed in there?

Graves and Diddy are hopefuls for the World Cup, held this year in Paris, and have one more qualifier to complete. As the undisputed darlings of American dressage, they’re certainly a pair to watch!