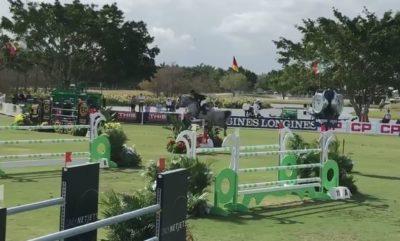 Once again McLain Ward proved to all equestrians that he is, in fact, a superhuman as he closed out his weekend at the Palm Beach Masters with not one, not two, but three first place titles. What’s his secret? Perhaps it’s the fact that each class he was aboard a gray mare.

While we can’t say there is any science to back that thought up, one thing we can say for sure is that McLain put in his A-game this weekend. He opened up the show with a win on Thursday in the $35,000 CP Welcome Stake aboard Hija van Strokapelleken, owned by Evergate Stables LLC. On Friday, he brought home the blue with his own Belle Fleur PS Z in the $15,000 1.35M class and he rounded out the weekend with top honors in the $25,000 Upperville Colt and Horse Show 1.40m class on Saturday on the Sagamore Farms owned Cerise.

Posted by The Hampton Classic Horse Show on Saturday, February 3, 2018

And of course, the legend shared later in an interview that he rocked the last class without even having the opportunity to walk the course. You can hear all of McLain’s commentary below regarding his weekend of wins.

On his Thursday win with Hija van Strokapelleken:

Regarding his ride on Saturday with his new mount, Cerise:

Moral of the story here: buy gray mares and ditch the course walk if you want to be more like McLain (Just kidding: we totally don’t recommend the last option!).