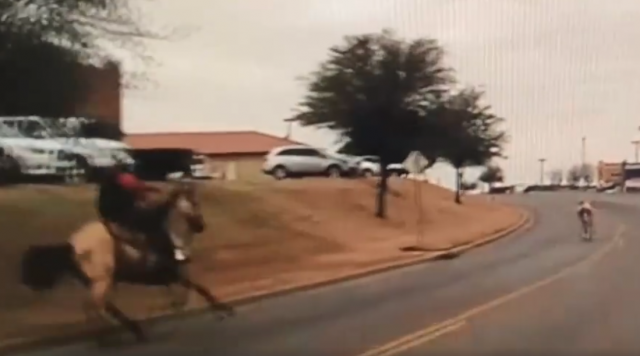 The modern world has certainly changed the way we interact with our horses — in most places in the US, the horse is now a companion animal or sporting partner, and usually also considered a pet. In a few corners of this country, however, the horse is all of these things… while still being the only means to get certain jobs done.

Case in point: this escaped bovine in Weatherford, Texas, called the “cutting horse capital of the world.” Fortunately, it’s also home to some great ropers who managed to turn this potentially-catastrophic event into a happy ending: watch a couple of cowboys, aided by law enforcement and some nimble truck drivers, apprehend a fugitive cow and neatly get it roped up and resting on the ground.

Since it's Friday we thought we would share a funny video from a call for service we responded to yesterday. We are very grateful that no one was injured during this incident, and we were certainly reminded why Weatherford is the "Cutting Horse Capital of the World." A very special thank you also goes out to the two cowboys that assisted us in resolving this matter.We noted on our TWITTER account @WPDTX, that people aren't the only ones who run from the police!

No one was injured during this chase — good work, cowboys. Go riding!