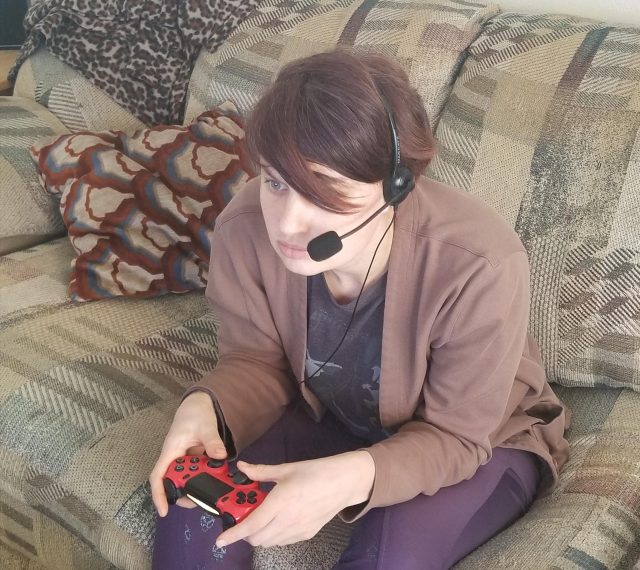 Way beyond just playing Zelda until you get the horse.

Being a child of the 90s, video games have been an ever-present part of my life for as long as I can remember. When I wasn’t out in the barn or running around pretending to be an elf in my backyard, chances are you could find me gathered around a console or computer with my friends. It all began with Super Mario Brothers on Nintendo Entertainment System (NES) trading turns on lives. My turns were always quite short, because despite always being intrigued by video game culture, my lack luster coordination means I’ve never been much good at them. I was the person playing Duck Hunt who would stand two inches from the screen in order to regulate the level of difficulty and avoid feelings of complete inadequacy.

Years passed and systems came and went. No genre of game was off limits: adventure-style, platforming, role playing, world building, puzzle solving.  They were all fair… game — if you will. Sim City, Golden Axe, Sonic, and Myst are just a few titles that inhabit my early gaming memories.

As I’ve mentioned before, I am not that coordinated, and while that isn’t super relevant for certain types of games, it is imperative for others. For the games that required more technical skill than I possessed, I was just as happy to watch as my friends played. My best friends, a pair of identical twin boys, referred to me as their good luck charm and would insist I come over to provide moral support when they were stuck on a particular level, or had to face a  challenging boss fight. I would always rush over right away because it made me feel important, like I was part of the team. These same boys brought me their Sega Genesis and dutifully reported to my house everyday after school to play ToeJam and Earl with me when I was out sick with mono for a month.

Now that I’m older I stick mostly to my PlayStation, using games to keep in touch with the friends I rarely get to see in person, or making new friends with people who I probably would never meet under any other circumstances. So often people think of the “lonely gamer,” and while they do exist, for many of us in the community, gaming is a social activity, either playing with friends in the same room, or connecting with friends across the country on our headsets. For us, gaming equals togetherness.

Gaming in breeches. That’s how we do it! Photo by Dave Maliszewski.

On the surface, gaming and riding are just about as disparate as two activities can be, but there are actually several parallels.

We’ve all encountered those horses that have us completely stumped. For one reason or another we find ourselves unable to make any progress despite following an established training program. Or maybe despite working really hard, you’re having trouble with a particular movement, or exercise. You. Are. Stuck!

Frequently in video games part of the fun is getting stuck and figuring out how to unstick yourself. Typically this involves searching for materials, tools and information that can aid you in quest. While playing these types of games, my train of thought usually goes something like “what are the major obstacles?” “What items/tools/information do I have available to me?” “Are the items/tools/information I have access to adequate to overcome the obstacles blocking my progress?” If no, “Where do I look for additional tools/information?”  I think it’s pretty clear to see how this thought process could be applied to a horse, or difficult exercise, or really any obstacle encountered in life.

Games often force you into these “stuck” scenarios repeatedly forcing critical thinking to become second nature. No game franchise exemplifies the problem solving skill set better than the Portal series. Using objects in your environment and some basic physics principles, you must make your way through puzzles presented to you by the evil AI, GLADOS. The fun puzzles along with a snarky sense of humor make for a great time!

In the day of near constant GPS access, we basically have a map in our pocket which can be pretty handy while trail riding. If you venture far enough into the wilderness and leave the comfort zone that is cell service, you may actually find yourself needing to rely on a paper map! What a concept?! Maps, both digital and paper can be life-saving, but are completely useless you know how to use them.

Enter video games! It’s not uncommon to find yourself completely reliant on a map while making your way through a new world.  In Borderlands 2, possibly my favorite game of all time, you need use both the full-sized map and the mini-map in your head’s up display (HUD) while hunting down Handsome Jack in the world of Pandora. I have never had a great sense of direction, but my map reading skills have certainly improved thanks to video games.

Riding is a sport dependent on the partnership between horse and rider. Each have their roles in the grand equation and each must execute with precision in order to succeed. In many video games, you are also a member of team with specific strengths and roles. Destiny, my game of the moment, is a game largely dependent on teamwork. You perform many activities as part of a fireteam, and together you make your way through hordes of aliens, robots, and alien/robot zombies. Perhaps you’re a warlock that needs to throw down a healing rift so your teammates can regenerate, or a hunter that needs to use your power of invisibility to grab an arc charge while your teammates hold off enemy fire. On top of your teammates helping you achieve game objectives, they also make the experience much more fun! And ya know, sometimes you just need to get down with your crew and dance to some Backstreet Boys.

Sometimes you just need to dance with your crew.

If you have spent any significant amount of time in the saddle, you know that coordination and proper timing of the aids is imperative to clearly directing your horse. While most video games are great for improving coordination, I find the Runner series particularly applicable to the type of coordination needed for riding.  It has been labeled a “rhythm platformer,” (a platformer is a game such a Super Mario Brothers where you quite literally run and jump from platform to platform) requiring you to jump, duck, and block in the rhythm of the game music. Similarly while riding, your aids are most effective when you are able to coordinate them with the rhythm of your horse’s gaits.

Riding is not a sport for quitters. You need to be able to pick yourself up after failing, ready to try again as many times as it takes in order to succeed. If you play enough video games, you are bound to encounter an epic boss battle or two. You will fail, most likely repeatedly, but each failure will teach you something that will eventually lead to your success. Some of the most epic boss battles I have encountered are part of the Final Fantasy series.

Blurring the line between technician-ship and artistry

Good riding and the crafting a good video game both require a high degree of technical skill. In both cases, good is differentiated from great with a certain degree of artistry. I think while it’s fair to say riding has long been considered an art, within the past decade video games have really taken off as a platform for artistic expression.  Utilizing beautiful imagery, insightful allegories, and often heart-wrenching stories, video games have become engaging on a whole new level. While a harmonious ride can easily bring me to tears, Journey was the first video game that was able to trigger the waterworks with its sheer, expansive beauty.

Both riding and video games are really fun! Sure. You will encounter people in both realms that take themselves a bit too seriously, but don’t let them get to you. Have fun doing what you love to do!