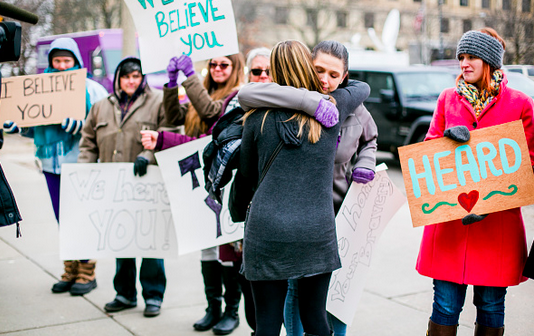 Time is up for sexual abuse in Olympic sports thanks to SafeSport, a resource for reporting and investigating sexual abuse. Here’s how it works and what it means for all U.S. sports, including equestrian sports.

Last month we published an anonymous letter from an eventer detailing molestation at the hands of her trainer as a minor. It offered a harrowing story of how sexual misconduct can creep into the relationship between a young athlete and a mentor/trainer figure, of the mind-warping manipulation involved, of the helplessness and despair victims endure, and of the complicated reasons why they are likely to remain silent or even defend their abusers.

Our readers responded en masse via social media and email, with their words of support and sympathizing #metoo accounts. The validation of a truth nobody wants to talk about emerged: The letter-writer is not alone.

Abuse is real and more common than we’d like to think. Many of us have been following the trial of Larry Nassar, the disgraced former USA Gymnastics and Michigan State doctor. After an emotional court hearing during which more than 150 women and girls testified that he sexually abused them over the past two decades, Nassar is now sentenced to life in prison.

But culpability doesn’t end with the abuser. Now the U.S. Olympic Committee (USOC), USA Gymnastics and Michigan State are under fire for their roles in enabling Nassar’s continued abuse, as it has become clear that allegations against Nassar fell on deaf ears or were suppressed. Because of this, the future of USA Gymnastics is in question. Its board of directors was ordered to resign, and Michigan State’s Athletic Director also resigned. Hopefully that is just the beginning of a systemic purge of all individuals who are culpable, either through blatant cover-up or sit-still-and-hope-it-goes-away silence.

Fortunately, the days that allowed a national governing body to sweep abuse under the rug are over. The U.S. Center for SafeSport was created by the USOC in March 2017 as a wholly independent body to investigate allegations of sexual misconduct in Olympic National Governing Bodies. Any Olympic sport, including equestrian, falls under the SafeSport umbrella.

In addition to providing training and education, any participant in equestrian sport can report sexual misconduct to SafeSport, and it will be investigated. SafeSport maintains exclusive jurisdiction over sexual misconduct allegations — which means no longer can a national governing body sweep away sexual abuse cases.

At the USEF Annual Meeting this month, SafeSport COO Malia Arrington presented on the SafeSport initiative, and resources have been made available to members via a Safety & SafeSport Policy page on the US Equestrian website. Included are sections on how to recognize, respond to, and report misconduct and abuse. Under the Safe Sport Policy, all USEF Designees are now also required to successfully complete awareness training every two years.

It’s up to all of us — riders, parents, coaches, administrators, ALL participants in equestrian sport — to utilize this critical resource to help protect our young athletes.

From the new SafeSport page on the USEF website: “The USEF depends on the eyes and ears of its athletes, coaches, and USEF Designees to support its Safe Sport Policy. It is requested that all who participate in equestrian sport become familiar with the content of the Policy and be mindful of its guidelines during training sessions and competitions.”

We as a sport need to talk, we need to spread the word about SafeSport, and most importantly we need to police ourselves and take action when necessary. Turning a blind eye to abuse in any form never has been and never will be an acceptable response. We all share a collective responsibility to be the voice for victims of abuse.

What does this mean for equestrian athletes facing abuse? It means you have resources that you didn’t have before. There is a burgeoning expectation of justice for abuse survivors and a public ready to believe and support you.

What does this mean for any potential enablers within our sport? It hopefully means no stone will go unturned from now on. Were you helping to shed light on abuse or were you comfortable in the shadows? If anyone in a leadership role is unsure of their responsibilities and the repercussions if they turn a blind eye, read more about what faces administrators at USA Gymnastics, Michigan State and the USOC.

What does this mean for abusers? To quote Olympic gymnast Aly Raisman’s powerful testimony against Nassar: “The tables have turned … We are here, we have our voices, and we are not going anywhere.”