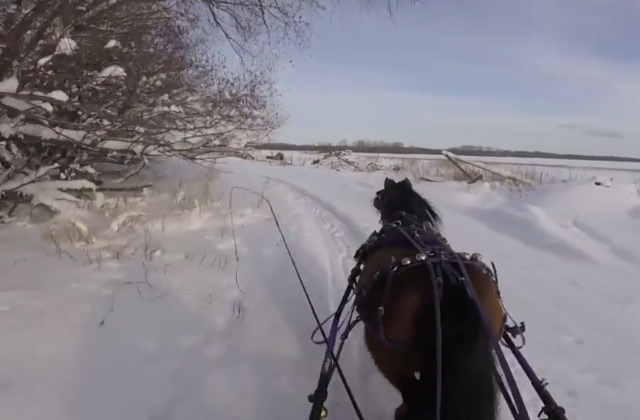 We’re not sure what’s better: the clear, crisp jingling of sleigh bells or the maniacal, joyous laughter of the driver.

When I have bells on my draft horse team, I’m used to the steady rhythm of their big-footed trot. While my team isn’t the best matched in the world, meaning that over the course of a few moments the rhythm changes from a nice, cadenced “ring, a ling, a ling, a ring, a ling” to a sort of percussion-section-falling-down-the-stairs effect, I’m used to the distinctive sound of big horses moving at a trot.

For another, the wild, joyous laughter of the driver. If that doesn’t make you laugh along with, you must be having a really bad day.

So the weather has broke enough for us to venture out for a drive. We received around 10" of snow, so I could not go where I wanted to. Have to get the neighbor with his skiidoo to make me trails. Still had fun though. Radar Was so full of it today.

Make the most of winter, Horse Nation! Go Radar, and go driving!