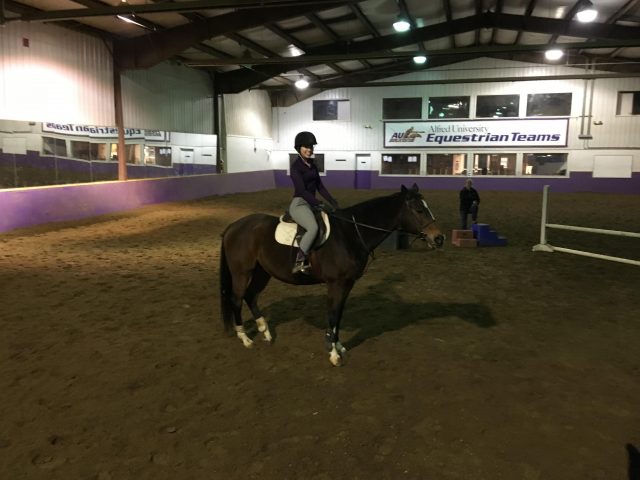 Sure, it’s a discipline now.

TFW you forget the correct boots… photo by Ellie Woznica.

When you’re taking twenty credit hours, riding on two equestrian teams, and working a part-time job, some things slip past despite exhaustive time-management and organization techniques. For example, last week, as usual, I went straight from my poetry class to my jumping practice, wearing breeches and street shoes. Upon arriving at the barn, I change into tall boots and bring my helmet, hairnet, and gloves in from my car.

Last week, however, I rode to practice with my roommate, and by some lapse in judgement grabbed my western boots instead. And thus, a very classy “Wenglish” outfit was born, much to my chagrin and to the amusement of my coach and teammates. (Having come straight from class, I was barely on time and had no time to return for the correct footwear.)

Merritt, my trusty Appendix Quarter Horse steed for the evening, bore my loose, slippery calves with extreme forbearance, seeming to choose his distances carefully to avoid chafing or jarring my legs. A lack of chafing or saddle sores on my legs after my ride did bring me some gratification—at least I wouldn’t bear bruises in addition to the embarrassment of riding around looking like a half-dressed lesson kid just starting out with the wrong attire in comparison with my put-together, professional teammates.

There are some telltale signs that someone is a combined western and hunt seat rider, and an accidental (or on purpose, if you have back-to-back practices in different disciplines) Wenglish outfit is just the beginning.

1. As mentioned above, the “Wenglish” look. It might be jeans and half-chaps, black breeches under chaps at a horse show, breeches and tall boots during a western practice, or any other combination thereof. As a team with a strong combined rider presence, Alfred’s equestrian center houses many such outfits on a daily basis.

2. A car that looks like someone might live in it. When you have to go from hunt seat practice, to colt-breaking class, to work with very little time between, you learn to throw a change of clothes, shoes, and some extra deodorant in your car for when you have two minutes flat to change in the barn bathroom, wash up, and become presentable for your library job.

3. Boots everywhere. Three people (and one dog) live in my apartment, but by the number of muddy boots piled on the mat by the door, an outside observer might guess that at least six farmers tromped in and out every day.

4. Identity crises. When you only see a certain set of people in western practice, they often don’t recognize you when you stroll past in breeches and tall boots with your hair tucked up into your helmet. You are a true jack of all trades and master of none, but you console yourself with the knowledge that you’re at least proficient enough to usually stay on no matter what kind of saddle you find yourself in, even if you do sometimes show up with half the wrong attire for any given practice.

5. All the practices. Most combined riders can be seen at some point during the semester jogging across campus with their boots unzipped, trailing a helmet bag. They still get some strange looks from the non-equestrian students, but as teammates we nod and smile as they pass us, knowing that at some point we will be in their shoes, rushing to or from a practice we forgot about or had to reschedule.

However frantic the additional practices scheduled might make us, the strength and versatility that comes with riding both hunt seat and western is worth the occasional embarrassing moments, especially when you have a barn full of supportive teammates who laugh it off with you.