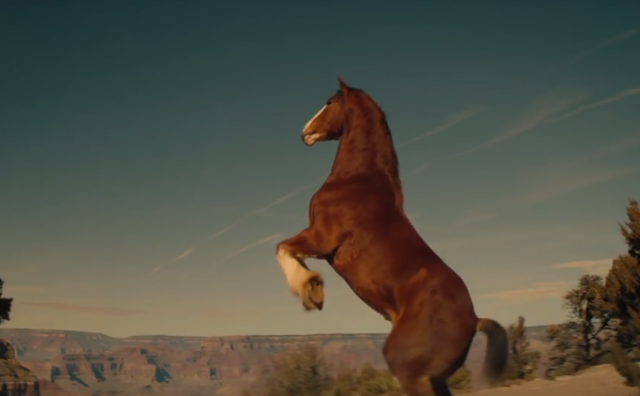 As a consolation prize, we get an Internet spot. We’ve also rounded up all of our favorites from past years for your viewing pleasure.

For some of us (such as myself) this is kind of good news, because I usually have to excuse myself from the room so I can dab at my eyes in private. (The draft horses, man! They just GET me!)

For most of us, however, this is kind of a rip. Budweiser did attempt to mollify what it probably foresaw as a wave of public outcry, however, and released this Internet spot, featuring a noble Clyde thundering all over the country like some sort of harbinger of beer:

Well, it’s better than nothing. (This ad will also run on TV on the days after the game.)

Budweiser has also promised that it will again be hosting its Clydesdale Super Bowl party, so you can keep an eye out for a quick spot during the game’s many commercial breaks that will let you know where you can watch the big horses on live cam just being horses. (Or, you know, you can go outside and look at your own horses. That works too.)

Until 2019, when we hope that the Clydesdales will be back for some Super Bowl tear-jerker action, here are the best big-game commercials from the past few years. Enjoy!

Which one is your favorite? Let us know in the comments section!