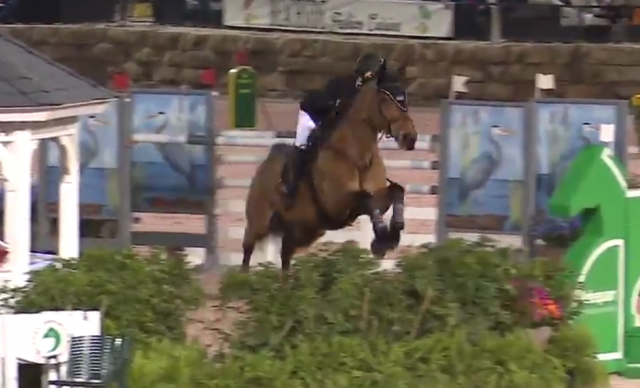 When the course designer puts a hedge in an opportune spot, your jump-off round might call for a little parkour.

“Extra” is one of those words the cool kids are using these days to describe something or someone that goes above and beyond or over the top. That’s the word we would use to describe this jump-off performance in the $132,000 Adequan Grand Prix CSI3* at the Winter Equestrian Festival in West Palm Beach, Florida: when Adrienne Sternlicht and her coach — a guy you might be familiar with named McLain Ward — formed a plan for the jump-off ride, it included a little something extra.

Whereas “extra” can often refer to something superfluous or unnecessary, however, in this case, Sternlicht’s extra addition was exactly what the situation called for. Watch her and her mount Cristalline add their own fence to the round to actually shave off some time and stay competitive:

Adrienne Sternlicht and Christalline get creative in the jump-off!

They didn't win last night but Adrienne Sternlicht and Cristalline stole the show after she and coach McLain Ward decided they had to get a bit creative in the 16 horse jump-off! Here's what they came up with ⬇????

Posted by JumpingSquad on Sunday, January 28, 2018

We love the audience and commentator response to that maneuver — you go, girl!

While she was initially in the lead thanks to this performance, Sternlicht would ultimately finish third to winner Darragh Kenny and second place finisher Jessica Springsteen. Not too shabby!