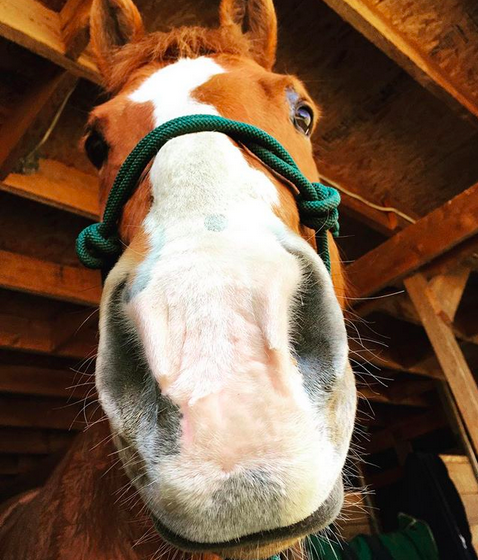 A tale told in GIFs.

In the age of the Netflix binge, my husband and I have developed an annual-ish custom in the winter to rewatch our favorite seasons of The Office. I don’t know exactly when this tradition started, nor how many years we’ll really be able to continue watching the same old social trainwrecks over and over again… but while settling into the comfortable routine of yet another episode of The Office again last night, I realized why Michael Scott is both cringe-worthy and oddly familiar.

My horse Red and Michael Scott are actually the same person.

I love little Red. I really do. He’s a well-intended loving little soul who just wants everyone around him to be happy, but does not always have the road map for how to get there. He is not terribly talented at anything but he somehow still gets by as our most useful all-around working horse on the farm. He gets himself into trouble, is a little socially awkward, has given me more gray hairs so far than any other horse I’ve ever owned and yet he’s still running around out in the pasture despite suffering a major injury in the fall that led me to hang up his bridle a little earlier than I wanted to before winter.

Michael Scott is a well-intended individual who wants everyone around him to be happy but has no idea how to accomplish that without creating some truly cringeworthy moments, offending half of his employees and driving the rest to desperation; he gets himself into trouble but somehow always comes out of it better than ever. We have no idea why we still love him after some of the most awkward, troubling stunts ever pulled on television, but we do, and we are happy when he is happy.

Basically, they’re the same person. Let me show you.

Red, operating on the delusion that he’s a tough guy

(You’re not that tough, Red)

Red, when I insist on reintroducing the basics every spring

(If you’re not a moron then why do we need to go on the lunge every spring?)

Red, when I take those springtime basics one step further than he thinks he remembers

(All I asked for was the correct lead)

Red, when we go for a long canter on his tiny choppy legs

(You’re not, but thanks)

Red, pretending to be apologetic for when he takes off crow-hopping for no apparent reason

(That’s not actually an apology)

Red, when he first met my new project horse

Red, when he notices the herd back in the paddock is running and playing and he is out on a ride