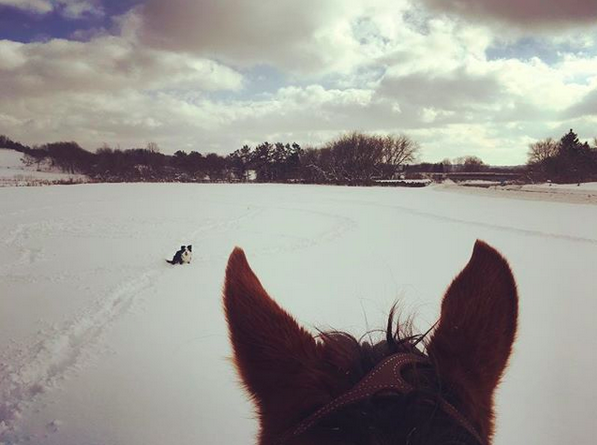 … and one step back.

Admittedly, I may have come into this project — like most of us do, realistically — with expectations set just a little too high. After all, I told myself, I had found what was probably the perfect Thoroughbred to transition to my barn situation: Jobber is an Ontario-bred who already had a post-track winter under his belt of living out 24/7 with a herd on nothing but hay. He’s already withstood the best and worst that the north country winter had to throw his way and his previous owner reported that he didn’t have to be in a regular program to stay sane.

With my rose-colored glasses, I recalled past winters here on the farm, thinking back to the beautiful, quiet bareback hacks in fresh snow under a bluebird sky with the winter sun keeping us warm, or the placid ambles out to the cow pasture to check on the herd. I could spend the winter teaching Jobber how to track cattle slowly, walking along behind the pregnant mothers as they waddled to and fro, I told myself glibly, with Jobber being ready to chase the swifter calves once they were on the ground in the spring. November is the perfect time of year to restart an OTTB, I told myself confidently.

As with just about everything else with horses, that all sounds great — in theory.

Yeah, about that beautiful riding weather

I don’t need to tell anyone at this point that winter does present some challenges to equestrians, nor do I need to repeat myself again that I actually don’t hate winter nor do I think winter is a reason to hide in the house and complain until spring. I do need to adapt a lot of my practices and riding plans for the season, and I do find myself remembering all over again every winter what works and doesn’t work (such as piling up my draft-powered manure spreader, only to have the whole load freeze and then break the chains. I do this literally every year and am 100% guaranteed to forget by next winter, sadly.)

Readers with access to arenas — whether indoor or outdoor — for my sake, count your blessings and appreciate those riding spaces. Yes, I may glory in my rolling pastures, wooded tracks and acres of private property to ramble over, but when the freeze-thaw-freeze cycle topped with a parfait of snow and ice renders all those lovely summertime surfaces into an uneven jumble of hidden holes and rock-hard lumps, those arenas and heated indoors of my earlier days start looking pretty darn appealing, and I remember why I give most of my other horses the winter off.

Now, admittedly, I did get in some early productive rides before the weather really took a turn. Even as recently as my last OTTB Cow Horse Chronicles post two weeks ago, I was fresh-faced and hopeful about all the progress we had made together, going for long, slow hacks across the snowy pastures that lay serene under that first big snowfall. Things have changed a bit since then. 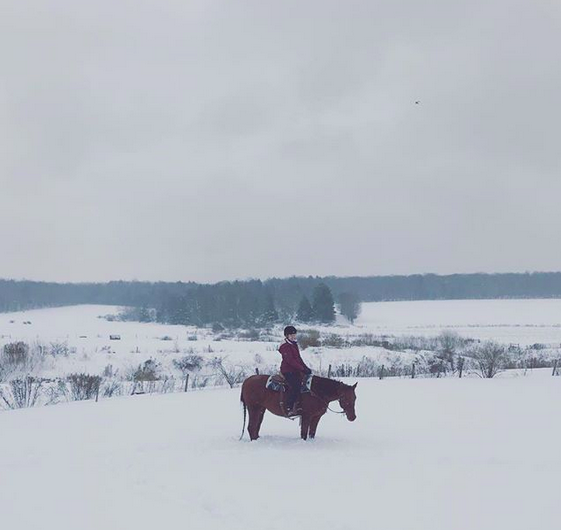 Two steps forward, one step back

The reality of training is that it’s not always bluebird skies and beautiful snowy fields — and Jobber and I are working through some of those pitfalls that were lurking beneath the surface. With a few changes in paddock arrangements for the winter, the magnetic pull that I always felt between Jobber and the herd has amplified, culminating in a couple of particularly frustrating rides in which Jobber dug in his heels and attempted to spin and dash for home a few times, both with company and without.

There were two ways in my mind I could have dealt with this: pop him in the rump with the end of my line and make him go forward, which I did do in the moment to salvage those rides themselves, or take a hard look at the source of the problem. And if I were a tougher, more confident cowgirl, I’d probably have stuck with the “drive him forward and make it work” method for every ride.

Instead, however, I tried to zoom out on our progress so far. My philosophy is that there’s a root to most problems — rarely is the horse “just being a jerk” unless he’s been allowed to get away with certain behaviors for most of his working life and it’s now become a pattern. Jobber has had probably about twenty post-track rides in his life (I stopped counting) so this was certainly no pattern, and I certainly didn’t want to turn it into one.

I’ve always operated on the belief that a herd-sour or buddy-sour horse doesn’t respect or trust his rider, so he seeks security with his herdmates. I tested this theory by taking Jobber for a walk in-hand; far out in the paddock out of sight and sound of the barn he attempted the same maneuver again with a spin away and attempt to bolt back for home.

Partially grounded anyway by another cold snap, I took the next ten days to work with Jobber more in-hand: working around visuals and obstacles in various paddocks and pastures around the farm, refreshing ground-handling skills including sidepassing, pivots, yielding the hindquarters, starting and stopping and backing up. We’ve worked over a bright blue tarp and also spent some time just dorking around in a small paddock at liberty, playing with all of our ground-handling without a halter or lead. We work hardest closest to home at both the beginning and end of a session, to remind Jobber that hanging out near home isn’t the reward. 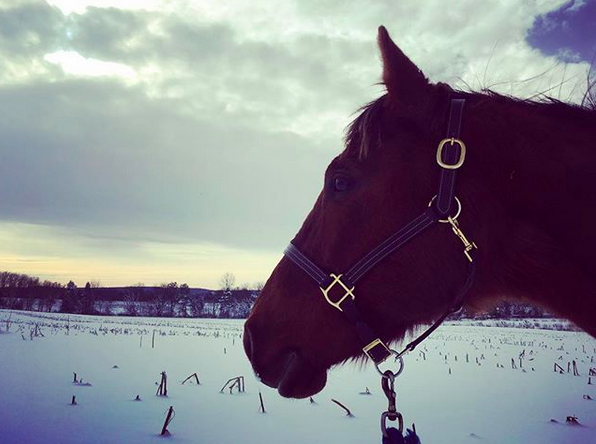 All in all, a barn-sour horse is probably a pretty minor issue compared to all of the possible things that could go wrong when restarting a horse. However, it’s definitely a problem that I want to nip in the bud now — and also an indicator that I rushed through our early ground work, skipping ahead to what I thought was the more fun part in actually riding.

Let my lesson learned — truly, my lesson still in progress — serve as an example to all of us — don’t rush. Take your time. Develop your relationship with your horse and remember that he is your partner. I didn’t do such a good job of listening to Jobber the first time around, but taking a step back to improve our foundation was certainly what we needed, and we’re ready to move forward again.