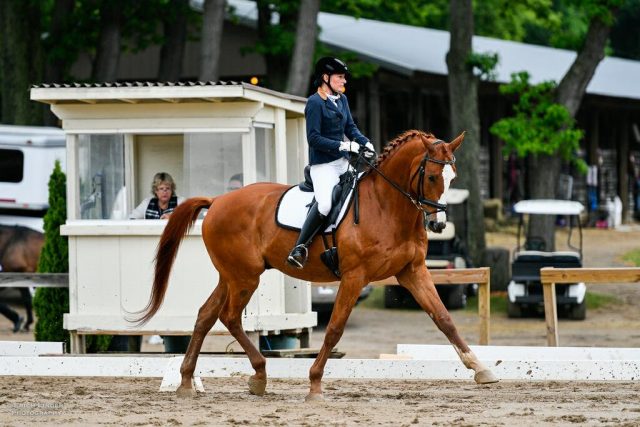 Para-equestrians deal with all of the same highs and lows as all equestrians — including the occasional wreck! Meagan DeLisle catches up with para-equestrian Pam Hardin to learn more about her life in the saddle.

To the non-equestrian, dressage may not appear as difficult as it truly is. Executing those delicate movements takes skill, athleticism and heart from both horse and rider. While for the most part, dressage is beautiful and perhaps a little more predictable than its siblings, that doesn’t mean there can’t be moments of surprise. Pam Hardin experienced one of those “gasp” moments this past weekend during her dressage test when her mount decided it was time to peace out.

But hey — she didn’t miss C this time.

Friday, we missed the halt at C. The next test, I made sure I hit it. #SoreButOkay #ParasAreRealAthletes #ParaDressageIsNotBoring I know it doesn't look it, but I chose to come off there. Tuck and roll!

What makes this story even more unique is that Pam is a Grade IV para-equestrian. Diagnosed with Erb’s Palsy syndrome, Pam’s left arm is six inches shorter than her right and has little motility or feeling. A portion of her brain was injured during the birthing process, resulting in neurological issues with her lower limbs and affecting her strength and balance. While many might allow these factors to bring them down, Pam continues to rise against and show the world just what a para rider can do.

Pam first got bitten by the horse bug as a child when she began to ride with the Girl Scouts program in Long Island. From there, she was sold. Later in her life, she was able to invest in some horses of her own — one of which was an Arabian named Cord that could serve as her daughter’s show horse one weekend and give her his all in an endurance race the next. That Energizer bunny of a horse is still living today at age 32.

It was the spunky three year old Arabian that would connect Pam with Melanie Mitchell of Aloha Acres in Johnston, South Carolina, who would later introduce her to the world of dressage and para-equestrian sports. At 56 years young, Pam rode in her first para-dressage clinic and she was hooked. “I’ve heard so many people say paras need to find the right horse and I agree. But I think you need a coach who can think outside of the box. One who won’t teach you the same way they teach an able bodied person, but can teach you to compensate and reach the same results.”

Pam competed her Arabian for a while, followed by showing a lease horse, but she and Melanie knew it was time to search for her own partner. For a year, Melanie and Pam scoured the internet for what could be Pam’s perfect para mount and then they found him. The only catch: he was in Germany. So the pair brushed off their passports and flew to meet the handsome chestnut gelding that caught Pam’s eye. “I knew from the first time I sat on him that he was the one,” said Pam. “We saw about thirty horses and I just knew. He was fancy with Melanie, but he would dial back when I was on him. It was like he knew.” So Pam welcomed the now 15 year old Brandenburg gelding Quaterjack (AKA Snickers) to her life. 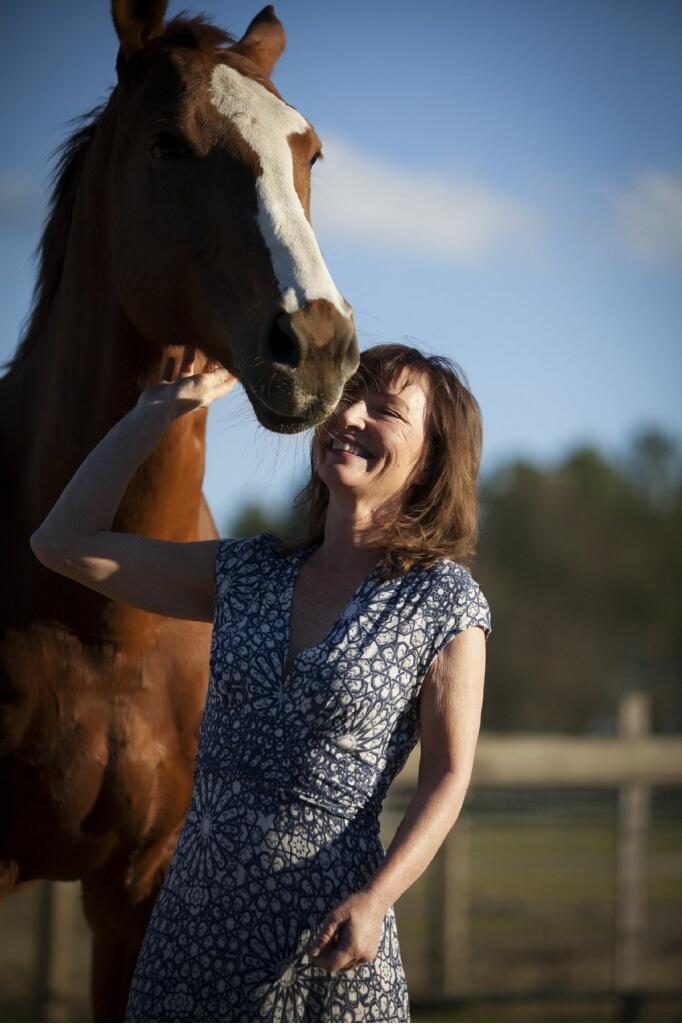 Pam and Snickers show in not only the para-dressage national and international classes, but they also compete in the able bodied classes as well. In fact, in 2016 Snickers and Pam placed 3rd in the Horse of the Year competing at First Level against able bodied competitors. Melanie also steps into the irons and shows Snickers in the upper levels. This year the duo plan to compete Prix St. George.

For the entirety of her life, Pam believed her disability was limited to her left arm and some partial brain damage from birth. Her original National Para Classification seemed to agree as she was placed in the category of the least disabled. It wasn’t until she went in for her International Classification that everything she knew was challenged.

“They touched between my shoulder blades and I just fell over,” Pam shared with Horse Nation. “I knew I was a little unbalanced and fell a lot, but never to this degree. They did it over and over again and I kept falling.” Pam was moved to a Grade IV Para-Equestrian status and her coach began adapting her tack to suit her needs.

“I have a special left rein with loops on it, each loop gets shorter and adds more collection. And I have magnetic On Tyte stirrups which are great! I also can nod my head rather than salute so I don’t have to drop my left rein, and now I have a Commander.” 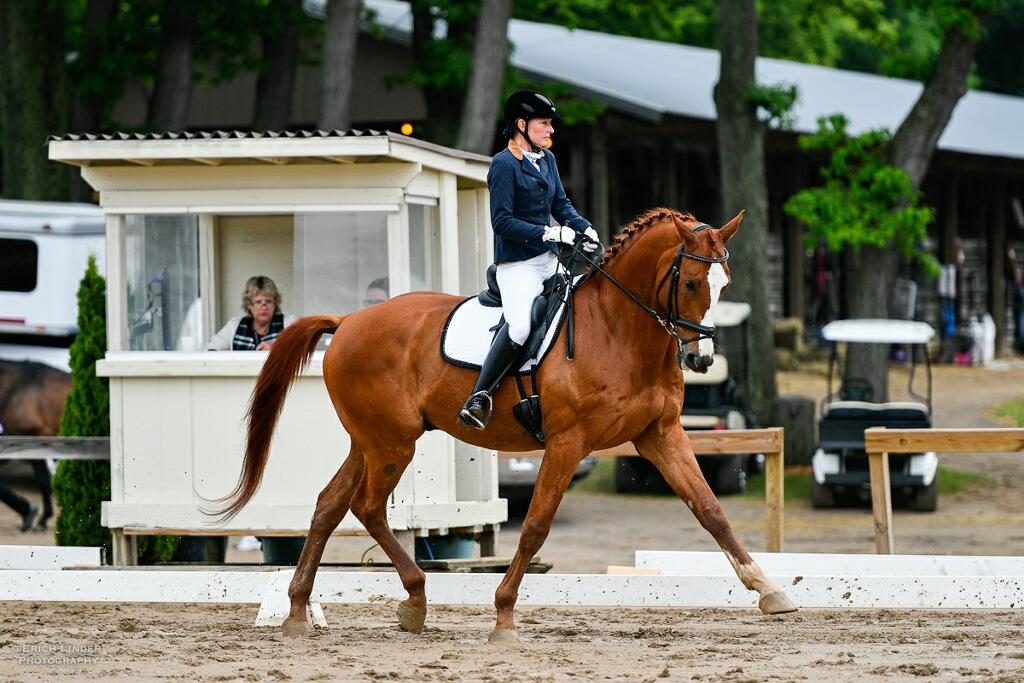 The Commander is Melanie’s most recent addition to Pam’s equipment adaptations. “I kept going off course. I tried to explain to everyone what it felt like, it’s like I hit a skip in the record. All of a sudden I don’t know where I am going or where I have been and I just forget my test.”

Melanie knew that Pam wasn’t simply forgetting the course, so she sent her to a neuropsychologist. Again, she was shocked at the extent of her disabilities. It was discovered that her left brain knows what the right brain doesn’t know how to do, and has to compensate for that, therefore giving her a hard time with her memory. Therefore, Melanie is able to stand at the ring and serve as Commander, reading the test to Pam as she competes.

“But, I don’t need a Commander for the Freestyle,” shared Pam. “Music is on the other side of the brain so I can remember my Freestyle tests!”

On Riding and Falling

Despite all that life has handed her, Pam has the most beautifully positive attitude regarding her condition. “We ARE athletes,” she said of para riders. “That’s why I posted that video of my fall. My coach and I went back and forth about it, but we felt it was important to show that para-riders do just as much work as able bodied riders.”

While it’s unsure exactly what about that corner of the arena was spooky to Snickers, he wasn’t the only horse to have a looksie. In fact, four other horses spooked at the same corner. “I was thinking to myself, I cannot fall on my right side. If I break my right arm, someone is going to have to take care of me. I knew I needed to sit up, but when I realized I couldn’t, I knew I had to pick where I fell off. I figured the cone would be softer than hitting the judges’ stand!”

Despite what looked like a not-so-fun fall, Pam was back in the saddle the next day. She lives each day to the fullest and always exudes an optimistic attitude. Even though her transition to becoming a para-rider was a bit challenging emotionally, she has embraced her new passion and is excited to share what para-riders can do.

Never thought I'd be able to ride again so soon after that epic fall. Here I am taking a lesson from the U.S. coach, Michel Assouline, yesterday. Notice, we're back at C! Haha.

And that is what riding horses is all about.