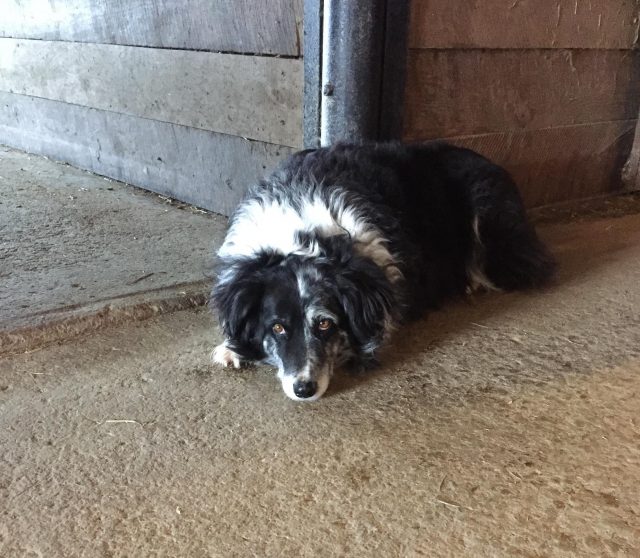 Every barn needs one. 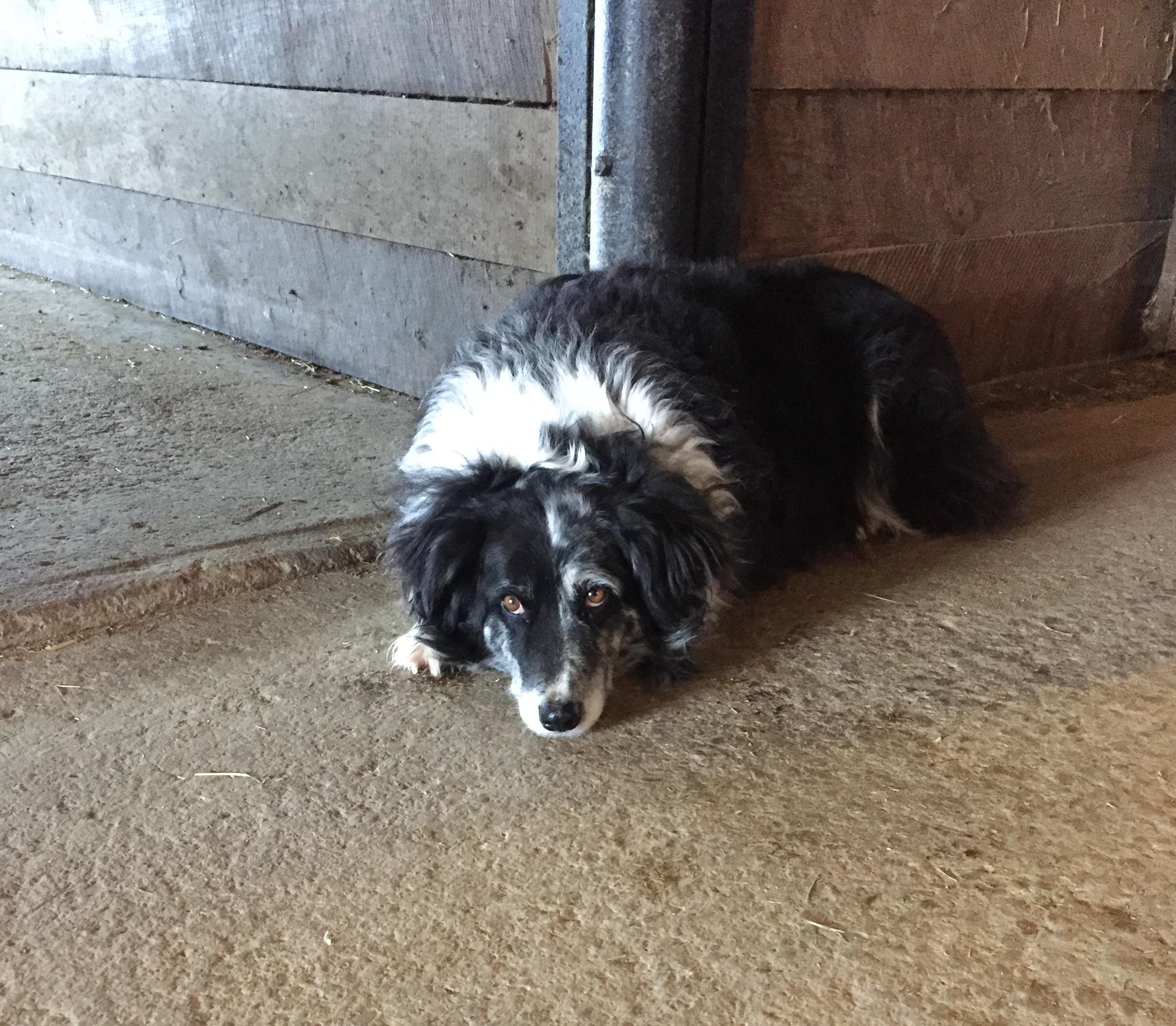 One of the given laws of owning a barn is that, despite any intent otherwise, it won’t just house one animal (for long, anyway).

Before my family moved to our farm, the barn had stood empty of horses for several years, but even then it housed a few raccoons and at least one barn cat at any given time. After we moved in with the horses, my brother decided he wanted chickens, and soon we acquired another barn cat. For a short while, our barn was home to a family of giant rats we not-so-lovingly dubbed “Templeton” after the creature in Charlotte’s Web.

The most steadfast addition to our barn, however, is our Australian Shepherd named Aly. She’s a pet and not a working dog, but she seems to believe that the barn could not operate without her. She works relentlessly at her self-assigned jobs, like barking at all of the horses when they come in the barn, go outside, wander too close to the fence for her taste, or move too quickly. She sits at the end of the aisleway and barks until we’ve shut all the stall doors. The horses pay her no attention, but she takes her position of supervisor very seriously.

After the farrier comes, Aly carefully and thoroughly picks up every hoof clipping and buries a few under the sawdust in each stall. If you watch her bury them, she digs them back up and moves them to a different, more “secret” location in the corner of another stall. No one understands the exact purpose of this task, since she never goes back to retrieve her hidden hoof pieces, but she never fails to pick them all up, sometimes right out of the farrier’s hand, and dispose of them in private.

The one creature that tolerates Aly’s herding instincts is our barn car, Shadow, who hates other dogs but lets Aly pick her up by the scruff of the neck and carry her around. In return, Aly lets the cat bat at her and rub against her. This is Aly’s favorite game, and the question, “Where’s your kitty?” elicits a frantic barn-wide search until the cat turns up. If no one else in the barn has time to play with Aly, Shadow will. I don’t know if Aly thinks she’s responsible for the cat, or simply enjoys the challenge of an interactive chew toy, but for whatever reason the two spend a lot of time in each other’s company.

Her favorite role as barn dog is “helping” with barn chores. As pictured, she often plops down right next to or on top of the hay I’m trying to feed and gives me sad eyes until I stop to pet her. My mom, somehow impervious to the sad eyes, can finish chores in forty-five minutes flat. I always take much longer, finding myself guilted into stopping to give the dog a belly rub. Other spots she favors are next to the wheelbarrow (so I’m obligated to brush the sawdust from her coat) or right in front of the side passage door I walk through to dump water buckets.

Here’s to the barn dogs whose skills are less than conventional, who seem to earnestly believe that their help is invaluable, and whose antics never fail to make you smile (even when it’s ten degrees out and you just want to finish feeding hay). 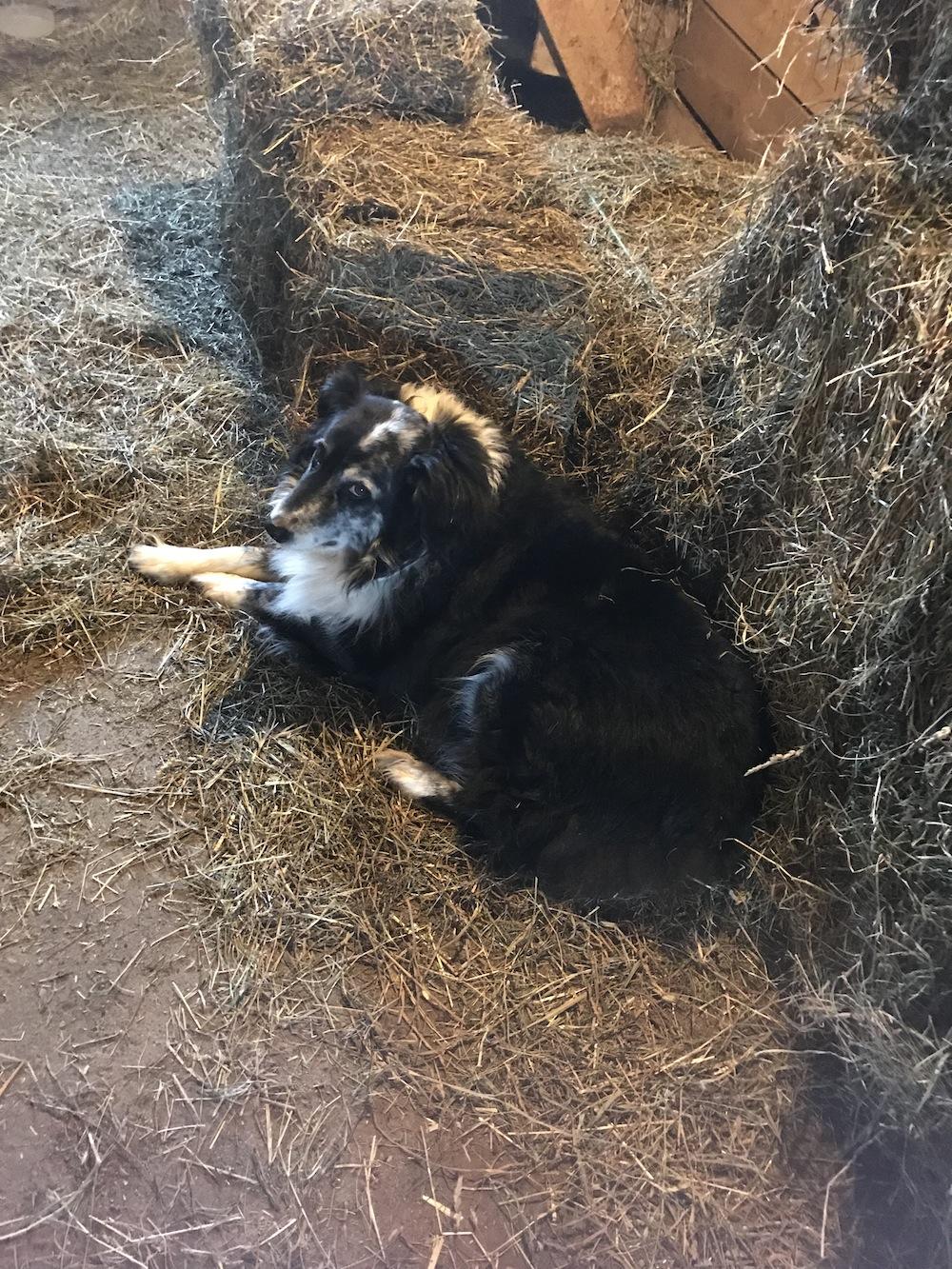