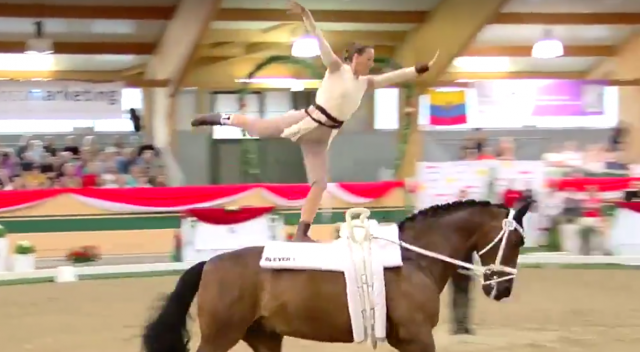 This vaulting performance from August 2017 popped up on our radars again as one of the FEI’s best moments of 2017, and for equestrians who are also fans of Star Wars, we’re tempted to agree.

The individual female winning performance by Kristina Boe should appeal to the niche community of equestrians who are also Star Wars fans. I know you’re out there among the stars. This one’s for you.

Best of 2017 #5: The Force is strong with Germany’s Kristina Boe as she won the freestyle women’s round of the FEI European Vaulting Championships 2017 with Winnie Schlüter & Don de la Mar. #FEIEuros #Vaulting2017

Kristina Boe is a doctor by day and now a gold medalist vaulter in her spare time: the FEI European Vaulting Championship was her first-ever gold. Boe’s equine partner was Don de la Mar, handled by Winnie Schlüter.

May the force be with you. And go riding!