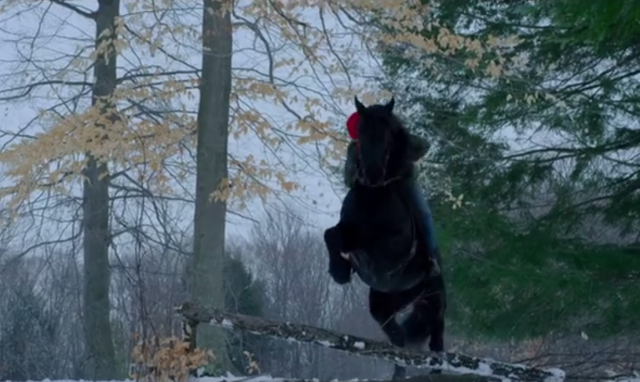 Albion: The Enchanted Stallion, available on Netflix and Youtube (for purchase), features a young Evelyn (Evie) Flynn played by Avery Arendes, who is convinced the world isn’t fair. Nothing is more clear to her as she returns home from the barn on Christmas Eve. Some people get to have it all, and as she recounts the events of the evening to her father, a girl from a wealthy family had been gifted a beautiful horse she clearly didn’t appreciate, she laments not being one of them. Her father, bound to a wheelchair due to an old injury, assures her that wealth comes in more forms than material goods and it’s possible to live a rich life even with little money. 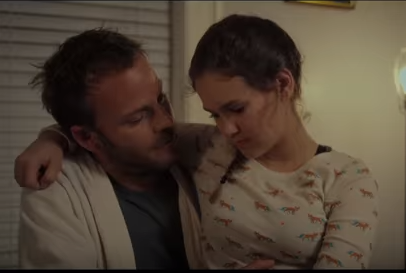 Evie being reassured by her father. Screen grab from the trailer.

The next morning as Evie is mucking stalls, she hears a noise coming from outside. She goes out to find a beautiful Friesian stallion, fully tacked up. She calls for the rider, but when none can be found she does what any logical person would do when faced with a strange horse that mysteriously shows up without its rider: she gets on! The stallion immediately takes off at a full gallop, and Evie seems to be enjoying herself until she notices a large log blocking her path. The stallion jumps and Evie tumbles to the ground, temporarily losing consciousness. When she awakes she finds herself in the mystical land of Albion. Here Evie meets many friends and learns of the conflict between the warring bloodlines. She then embarks on a journey to defeat the evil General Eeder (John Cleese!) and bring peace to Albion.

To my delight, one of General Eeder’s followers, tells him “it’s just a flesh wound,” after losing a finger. via GIPHY

Playing pretend is a common pastime amongst children and they will often create elaborate  stories in their mind. These stories, usually developed on the fly, often incorporating ubiquitous tropes and catch phrases they have absorbed from any number of sources. While children in their excitement will undoubtedly lose track of the plot that never really made much sense in the first place, everyone will go on as though they know exactly what is happening. Now imagine that instead of playing pretend, a group of horse/fantasy obsessed are holding a moderately talented cast of actors and production crew hostage, forcing them to create a movie out of their disjointed story. The result would probably be something closely resembling Albion: The Enchanted Stallion.

I found myself muttering “What the heck is going on?!” under my breath  several times over the course of the movie. Evie, a stranger in the land of Albion, a character perfectly positioned to be an audience surrogate, agrees to a perilous quest that self-admittedly has nothing to do with her, and appears to gain a grasp on the complicated politics in a matter of seconds. She becomes an insider almost immediately leaving the viewer feeling like an uninformed outsider for the entirety of the movie.

The horse in this movie is absolutely stunning, and it does appear that he actually is a stallion, so props to the horse wrangler on set because he appeared to be incredibly obedient despite some cringey riding. While the movie begins incredibly horse-heavy, the horsiness level tapers over time leaving some one such as myself wanting more horse.

While sets often incorporated gaudy accessories like giant fake mushrooms, the movie was relatively well filmed with some nice, artistic shots. The shaky cam portions, however, were unnecessary and came across as a nausea-inducing gimmick.

Despite coming across as somewhat low budget, this film features an all star cast. In addition to John Cleese, you have Richard Kind playing the stable manager, Jennifer Morrison as the Abbess, and Debra Messing as the Queen. It kind of felt like someone on the production crew was owed some serious favors, because I can’t imagine any of them needed the work that badly. 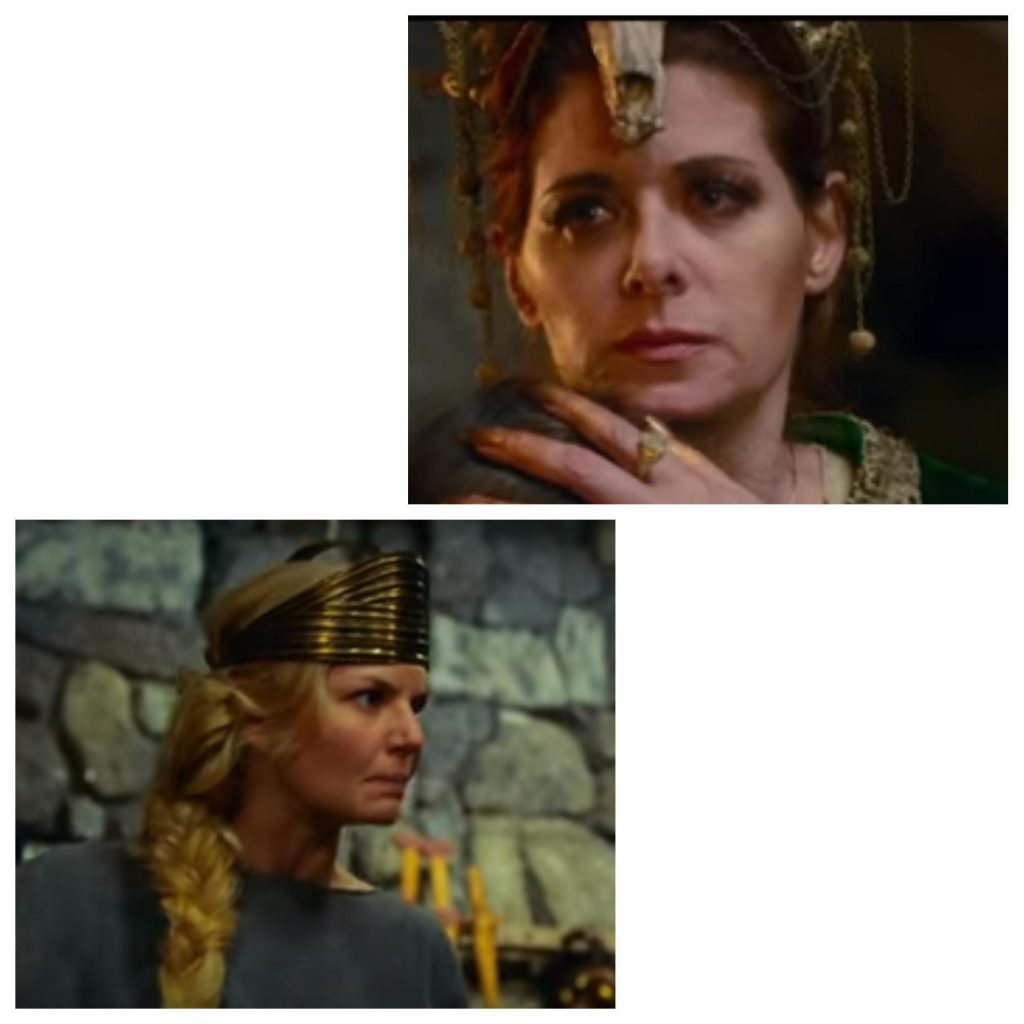 Debra Messing as the Queen and Jennifer Morrison as the Abbess. Screen grabs from the trailer.

The acting, with the exception of a few unbearable attempts at a Scottish accent, was actually quite good and I would expect that Avery Arendes could have a bright future in the film industry if she so chooses.

Though Albion: The Enchanted Stallion didn’t really do it for the adult me, I suspect that a 7 or 8 year old Biz would have gone nuts over this movie. I should say that some parents might not find this movie appropriate for younger children, due to a few scenes of cartoonish violence, but nothing too worrisome in my opinion. Overall I give Albion: The Enchanted Stallion 3 out 5 carrots. 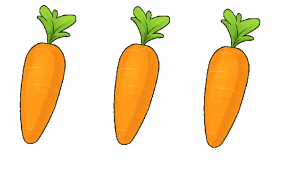