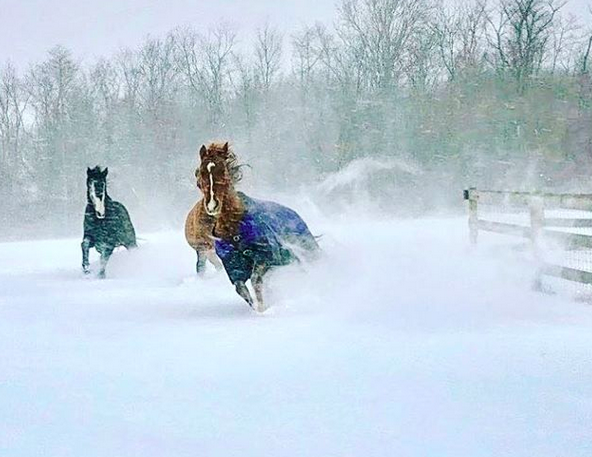 Only January 5 and we already have our first major winter storm under our belts. Here’s how you all got through the East Coast’s “bomb cyclone” — because winter weather wasn’t already scary enough before we started calling it that.

A powerful winter storm dropped snow today in all sorts of places where snowbirds like to flock in the winter months, hitting the mid to north Atlantic coast particularly hard. A foot of snow was recorded in towns on coastal Virginia and snow fell as rapidly as one to two inches an hour in New York City and three inches an hour in Providence, Rhode Island. Northern Maine saw the most snowfall at about a foot and a half. Damaging winds gusting over 70 mph created blizzard conditions in multiple locations; coastal flooding is still ongoing in Massachusetts with storm surge dramatically flooding the streets.

While there are plenty of places in the United States that see regular accumulation at this rate, it’s an unusual event for a lot of folks that were in Winter Storm Grayson’s path. Fortunately, it looks like many of our readers weathered the storm just fine, as far as Instagram is concerned!

…but despite the dramatic downturn in weather conditions, your horses seemed pretty okay with it:

When you wish you had your camera outside! #cyclonebomb

Some of you still even got in a lesson!

Braved the blizzard to have an awesome lesson on my frozen pony! (Note the icicles hanging from his jaw in the top right picture ????❄️????) @go_riding #horsenation #blizzard #noreaster #morganhorse #dressage #dressagehorse #weatherbeeta @weatherbeetana #snowpony

There were a few noted exceptions, of course… such as this pair, going viral:

Meanwhile, in the faraway fairytale land of Nevada, Horse Nation staffer Maria Wachter shares the following: “Did I tell you that my mule had flies on his ears this past week during our ride? Yep, it’s that warm out here in Southern Nevada. I’m chugging Gatorade because I’ve been sweating so much and using the AC in my truck. I don’t want to sound like an ass, but this weekend would be a perfect weekend to take out our boat and cruise around Lake Mead. It’s that nice out.”

Thanks, Maria. As for our readers on the East Coast, we’re sending you all the best with the hope that sunny skies will come back soon. They already did for this chipper fellow.

Got an epic Winter Storm Grayson story to tell? Let us know in the comments section!