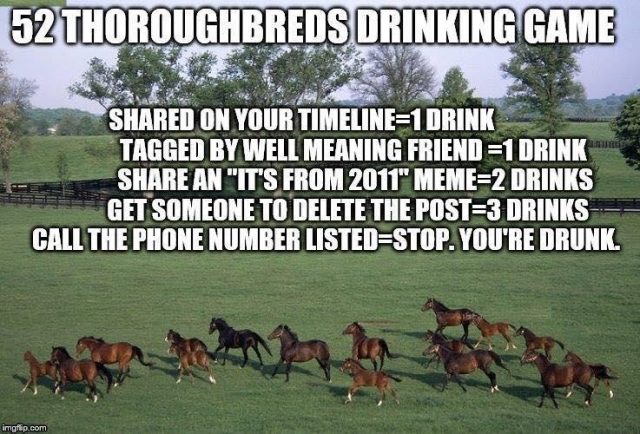 Seriously, this thing will never die.

Remember that viral post about the 52 free Thoroughbreds in need of homes immediately or they’re all going to slaughter due to lack of interest from an inheriting family member?

Guess what’s just come back around, harder to kill than a cockroach.

The post itself, and its many slightly different iterations, reads as follows:

FREE HORSES!!! 52 thoroughbred horses need homes. Will go to Sugarcreek this Sat. for slaughter. Gentleman died and his son wants nothing to do with them. Most broodmares are broke and some are in foal weanling, yearlings, 2yrs. and 3yrs. old most are gelded. FREE and papered. Friend of the deceased is trying to find homes. 440-463-4288 Barnesville, OH.
Please copy and paste this on your status.
I would hate to see all these house put down. PLEASE someone help they FREE and papered!!!!!

I hope someone can help!

Somehow, due to the magic of the Facebook algorithm, this thing rears its head almost annually — it would be a fascinating study in the mysteries of social media to figure out just exactly how this post manages to resurface, catch a few unsuspecting, well-intended individuals and take off yet again to bedevil horse people everywhere.

In case you’re not familiar with the full, original story, this WAS a real, desperate need in late January of 2011 — Daniel Steans, DVM passed away on January 27, 2011 and his good friend Lynn Boggs took to Facebook to try to find homes for his 52 Thoroughbreds. Thanks to the power of social media, all 52 horses found homes in just four days — read the story on Eventing Nation.

Unfortunately for all of us seven years later, the presumable posts of triumph and gratefulness didn’t go viral. Now, the original plea for homes comes back to haunt us, somehow becoming the punchline to a thousand equestrian jokes and driving us to distraction. It catches everyone from your sweet Aunt Judith who knows you’re into horses and thinks maybe you could help to actual horse people who simply never heard about it the first half-a-dozen times — I myself was sent this from a horse owner who was convinced it was a different set of 52 Thoroughbreds in need of homes.

It’s the Nigerian Prince email for horse people, only without the actual scam.

Fortunately, there are several productive ways we can contend with the 52 free Thoroughbreds:

1. Share the good news about the original 52 free Thoroughbreds and thank the sender for their concern.

Whether it’s sweet, clueless Aunt Judith or your fellow boarder who sends you the message/tags you in a post/writes this on your Timeline non-ironically and in all seriousness, they’re acting based on genuine concern and belief that you might be equipped to help these horses in a time of crisis. Isn’t that a good thing?

The last thing we should do in these situations is curtly tell the concerned friend that this is fake and that you’re sick to death of seeing it (even if you are). Instead, take this as an opportunity to educate and inform your friend about the true story, let them know you appreciate their concern and belief that you can help, and maybe gently, casually remind them how important it is these days to vet your sources for basically anything you read on the Internet.

After all, for some of your Facebook friends, this is one of the only interactions with the horse world they might have, and it’s important not to give them the wrong impression.

2. Turn it into a benefit for real Thoroughbreds — or any horse — in need of a home ASAP.

I’ve seen this now in a couple of different places online and I think it’s a great idea — for every 52 free Thoroughbreds post out there, there are plenty of very real horses in immediate crisis who are in need of a soft landing. Social media users are encouraging one another to make a small donation to a favorite equine charity every time they see the 52 free Thoroughbreds post — some are aiding other Thoroughbreds via off-track aftercare, others are reaching out to rescues plucking horses from slaughter sales. The charity isn’t as important as the intention — use this slight annoyance as an opportunity to do some good and save more horses destined for an untimely end!

3. When all else fails, there’s always this. 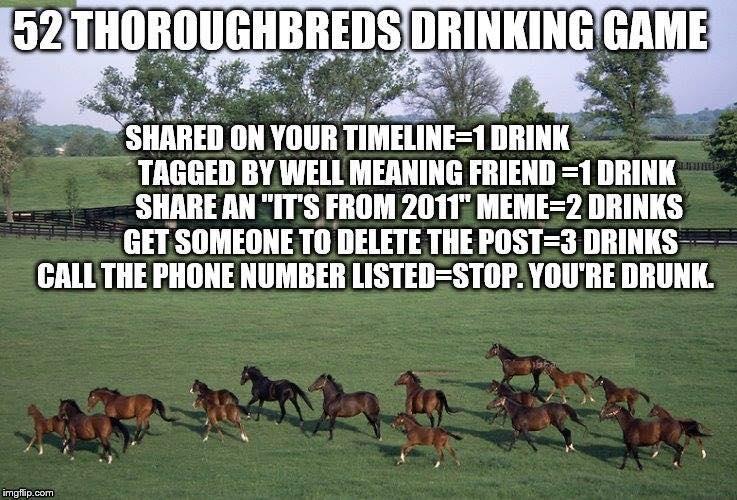