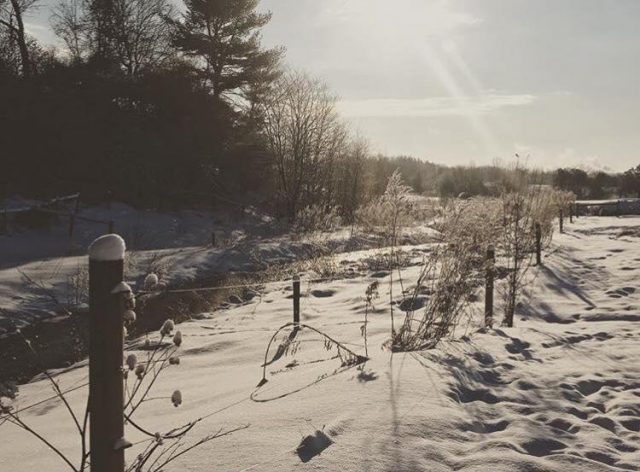 In the latest “Tales From the Farm” adventure, Kristen Kovatch explores that age-old equestrian truth: fifteen minutes in barn time is more like two hours in real world time, especially in the winter.

Like most of the country, my little corner of Horse Nation has been plunged into unusually cold conditions for the past week or so. Unlike a lot of the country, I also happen to be in lake-effect snow country, where bands of snow clouds suck moisture up from the Great Lakes (in our case, Lake Erie) and then sit over land without moving and dump all of their snow in a big pile. Needless to say, this can make farming and horsekeeping a bit of a challenge in the winter, especially this week when we’re getting late January/early February temperatures in early January, combined with several feet of snow in one go. I cringe to think about what the end of the month might look like.

But I always try to keep a stiff upper lip about these things — because when you finally have a moment to look up from your snow-soaked pants and frozen feet, it’s really freaking gorgeous around here, all dusted in snow. And there is plenty to do, even if it doesn’t always involve saddling up for a ride. My snowshoes have already gotten a good workout this season. 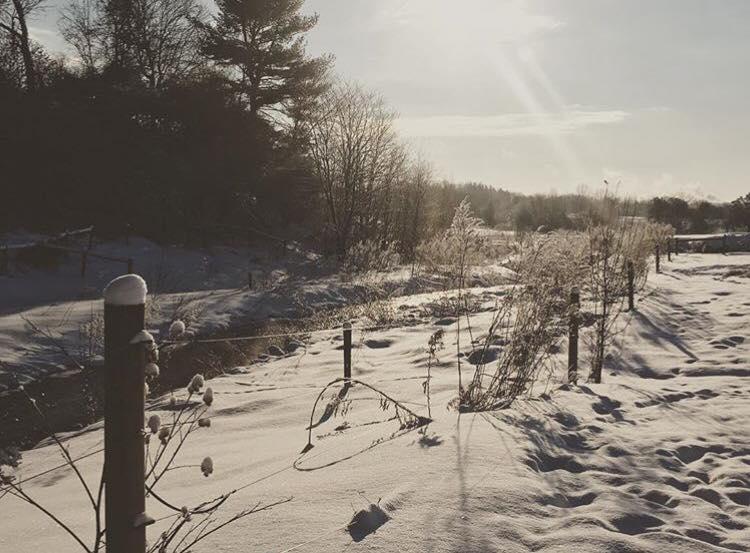 Tuesday was a particularly chilly day in the low teens, well below my cutoff where I find it safe, enjoyable and productive to go riding. I’ll groom while I feed, I thought to myself. That’ll keep me warm and get the blood flowing in all of us. And then I’ll head back home to finish the afternoon.

Yes, a forty-five minute budget gave me plenty of time, I told myself, despite my new added chore of hauling corn out to the cattle who were wintering over in a dry lot. I had the farm’s ATV at my disposal for that job, after all — the little yellow machine we called the Cadet. I’d be able to take grain out to the draft horses, and while they were eating, zip on out and spread corn for the cows. Easy as pie!

Well, eventually. It wasn’t muscle memory yet that the barn doors were frozen shut, and I strode confidently all the way to the front of the horse barn before I remembered. I turned back around and trudged to the path that my sister-in-law and I were now wearing deep into the snow so I could go through the back man-door, then open the Dutch window on the man-door that led out into the horse pasture, hang a 180 and then open the gate so I could get from the barn into the driveway. If you’re confused just reading that, don’t worry, because I’m equally confused sometimes as to how I’m supposed to get from Point A to Point B.

The frozen barn doors had become our cross to bear in recent winters — just an obnoxious phenomenon of the ground heaving and settling with years and years of freezing and thawing. The earth below the rolling doors defied whatever sort of trench-and-gravel system we installed and re-installed, and we had come to accept that this was simply the way it was going to be for the foreseeable winter future.

I brought in Jobber and Winston, set them up with their grain, pulled their blankets to check their body condition and gave each of them a vigorous grooming, which perhaps I enjoyed much more than they did, reblanketed and turned them back out.

I set up Rocky and Randy’s pans of grain and supplements, did the song-and-dance with the multiple doors and gates and headed to the cow barn, where farmhand Bill was getting my corn set up for the cows.

Bill, bless his heart, is about a hundred and thirty years old, and I think he probably came with the farm when it was first purchased by my husband’s grandfather’s grandfather when he immigrated here from Sweden. He had four bushels of corn in the back of the Cadet, which was making ominous growling and whining noises (rather like a large dog, rather than a small machine).

“Accelerator’s stuck,” Bill grumbled, gesturing vaguely to the front of the Cadet. I looked down to see that in fact it appeared that Bill had attempted to punch it to the floor, presumably to warm up the engine. Fortunately for all of us, the Cadet was in neutral; otherwise Bill would have rocketed off into the ether with no way to stop. “We’ll have to take the tractor.”

We shut off the Cadet and Bill fetched the big red tractor from the garage; we piled the bushels of corn into the bucket, along with a selenium salt block and my grain pans for the horses. Bill nodded to the snow-encrusted steps of the tractor, where presumably I could ride if I had a deathwish to lose my grip and my footing and fall to be crushed beneath the juggernautical back tires, and I waved him on, opting to instead half-march half-jog through the drifted snow ahead of him.

Rocky and Randy fell to their grain with relish, and I let Bill into the shared pasture so we could both spread corn, a process that involves a lot of close contact with very large farm animals (including our previous Horse Nation star, Joe the Bull). I let Bill back out of the pasture, waving him on so I could supervise Rocky and Randy finishing their grain and bring back their pans on foot. This was a well-choreographed feeding so that the draft horses had very little access to the actual corn, the high starch/sugar content being exactly the opposite of a balanced equine diet.

As soon as Randy was done — he gets less grain than Rocky and eats much faster — he wheeled off and bombed through the cattle like a kid through a flock of seagulls, clearly enjoying himself as the cows scattered before him in terror. Rocky finished his meal like a gentleman and ambled away in more reserved fashion. I gathered the pans and began the long trudge back towards the barn.

Upon my arrival, there was Bill, coiling up a stout chain as the tractor idled, the Cadet now in the middle of the barn driveway. “You got a few minutes?”

I glanced at my phone. I mean, no, not really, but sure, Bill, anything for you.

“Okay, you steer and I’ll push.” The open overhead door to the toolshed yawned before us, requiring a hard turn to the right and then careful aim as to not upset the stack of stove wood, half-barrels of T-posts, coils of old barbed wire from the cattle pastures and other assorted farm detritus stacked perilously close to our parking spot.

This doesn’t seem so bad. Then I realized Bill was climbing back up into the tractor, and I realized how he was intending to push. Oh yes, this is definitely safe. 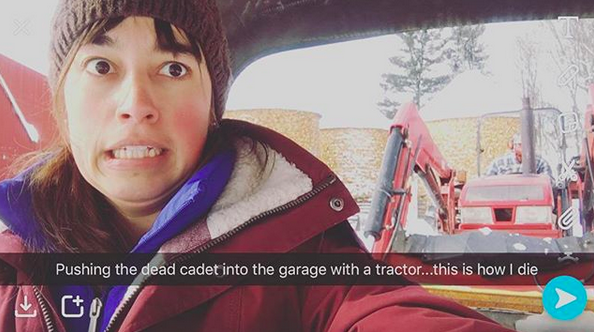 Several minutes of grinding metal on metal, internal wincing on my part and a bit of swearing from Bill, we had carefully skated the Cadet into its resting place where presumably Bill would tinker with it for a few days, hopefully not drive it through the back wall of the toolshed and return it to the working string of farm equipment.

Since it’s projected to be in the single digits for the rest of the week, however, I’m not going to be holding my breath.

That was close… right?