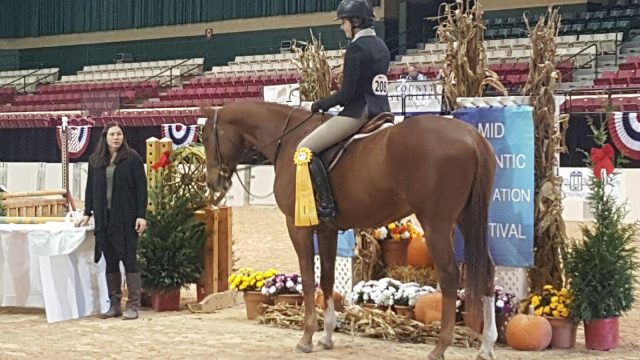 My love of Thoroughbreds far transcends just my own horse, and recently I got to spend a weekend and ride at a show with one I had never met before.

After a difficult month spent studying for hours on end, to say my Thanksgiving break started in the best way possible would be an understatement. I was given the opportunity to attend the Mid-Atlantic Equitation Festival! The MAEF is a competitive show with mainly equitation classes for riders of all ages and skill levels; however, my ride was a little different than others. As most riders are riding horses of their own, that they’ve most likely ridden before and more than likely qualified for MAEF on by receiving a 1st place ribbon in an equitation class at a USEF show, I was riding a horse that I had never ridden before. I guess I was just putting my intercollegiate catch-ride experience to the ultimate test! 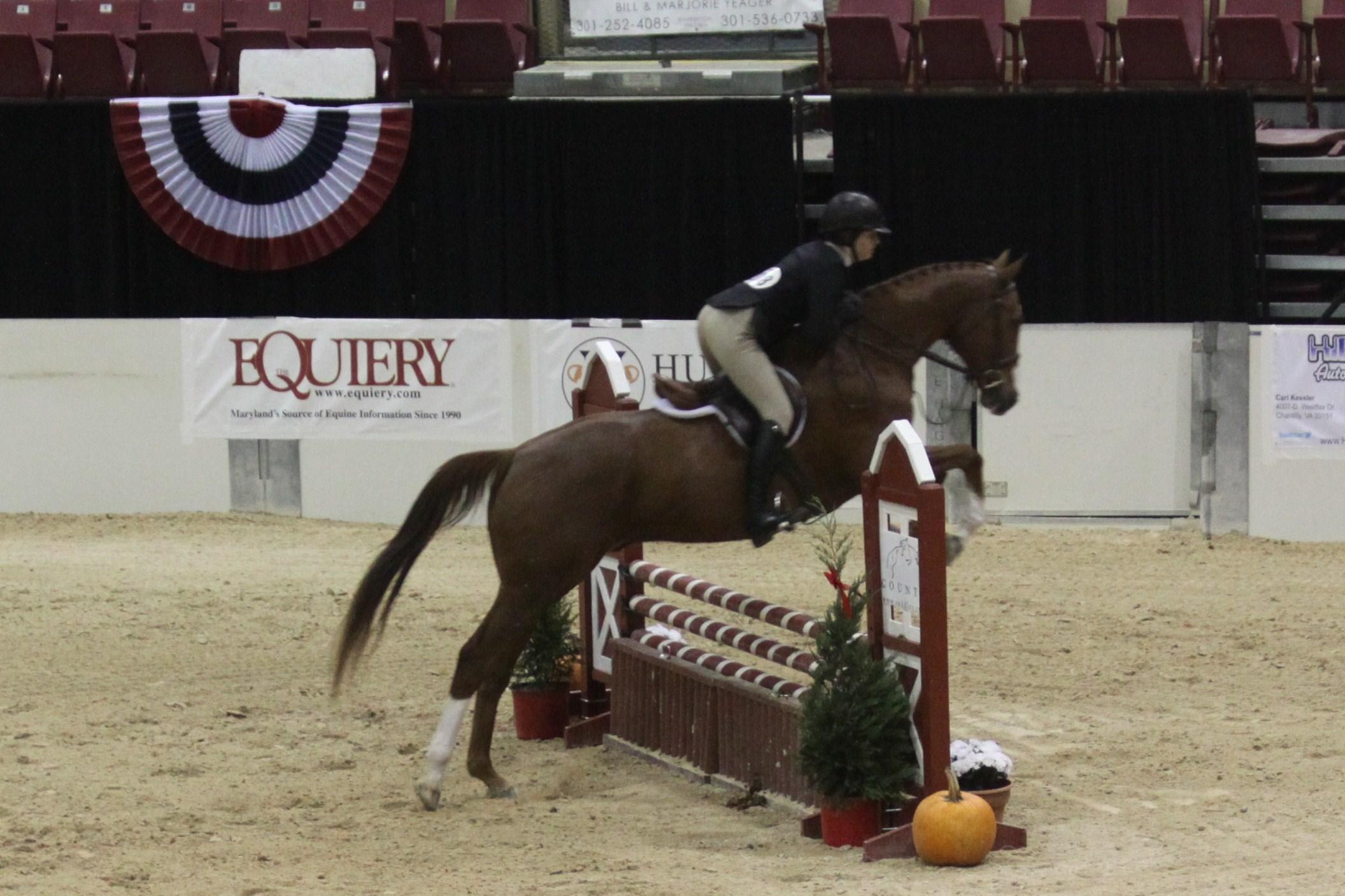 All photos by Lori Bellerive

Jack of Hearts is his Jockey Club name, and Clifford, the big red horse, is what he goes by. We officially met on Saturday morning at 5:30 am in the darkness and while the sun was rising we got acquainted. By early afternoon we completed two trips around the indoor of the Prince George’s Equestrian Center. Were they perfect trips? No. Did we make some mistakes? Yes, but we put down two decent, respectful rounds for a green horse who had never jumped 2′ 9 before, and for me, who hadn’t jumped that height for four months and had never ridden him prior to now. And we had fun doing it, which is the most important part — learning and enjoying the ride.

The best was yet to come, however, as Mid Atlantic Equitation Festival isn’t just about equitation. There is a costume parade and a costume class. We went as the Power Puff Girls. There were four of us, two on horses, one on a bouncy horse and our “unofficial coach” who is the owner of Clifford.

For this class, you are not allowed to have help from your trainer/coach. We would enter the ring as a group of four, with our “coach” helping us to navigate through our course. One of us waited at one end with the “coach” while the other jumped the first four jumps then met with the “coach” who removes the armband from the first rider and puts it on the second rider, which in this case was me. The second rider then finished the course with the remaining four jumps and then the “coach” hands the armband off to the third rider of the bouncy horse who races against the clock to the finish line. Scores from both riders as well as the bonus points from the timed ride are added to determine the placings. The quickest times get bonus points. 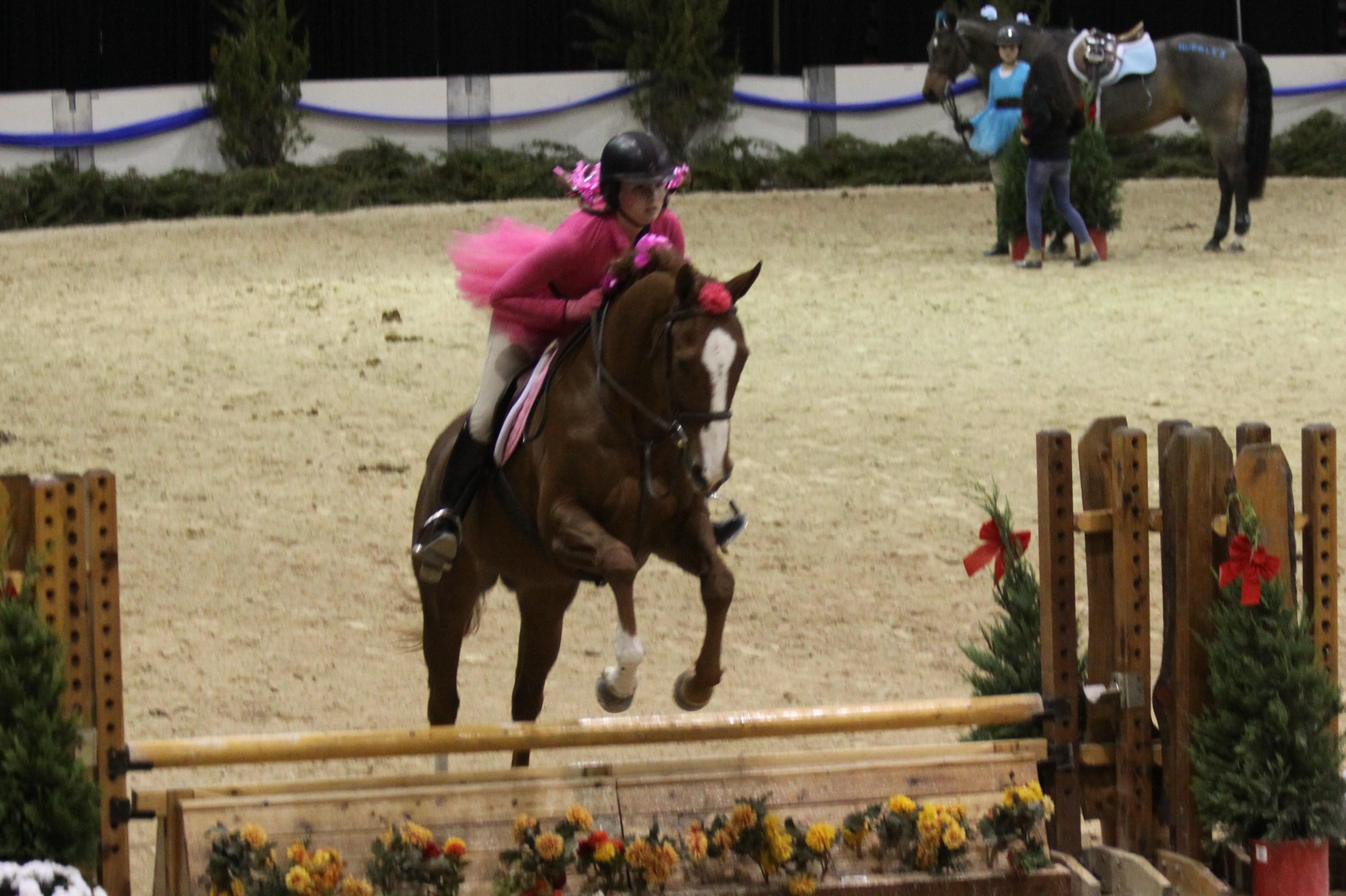 Our rides were okay and our rider aboard the bouncy horse was quick, but everything added together was not enough to earn us a placing. We did, however, have a blast!

I also earned a scholarship and award for placing first in the Maryland Horse Industry Board Horsemanship test. It’s a wonderful opportunity which combines scores from a written test about horsemanship knowledge and then a practicum which is conducted by a veterinarian testing your applied knowledge and skills on anything from vaccinations, digestive system, soundness, conformation, hay quality etc.

The next and final day was the championship division classes. Again we were up early, flatting while dark, braiding and grooming in the cold and wind for our last trip in the indoor. We had a really decent round which earned us a callback and although our second round resulted in a deep distance and a dropped pole, I couldn’t be more happy or proud for a great weekend spent with an awesome Thoroughbred. We ended up placing tenth over all and Clifford and I earned third place in the Mid Atlantic Equitation Festival Scholarship award. Although we didn’t earn scholarship money for our placing, we did receive a beautiful ribbon to commemorate our efforts. This test combined your written test score and your two highest equitation scores. We only had two rides that would be eligible for this, and considering we were at a disadvantage as riders take their own horses to this show, I am very proud of how well we did. 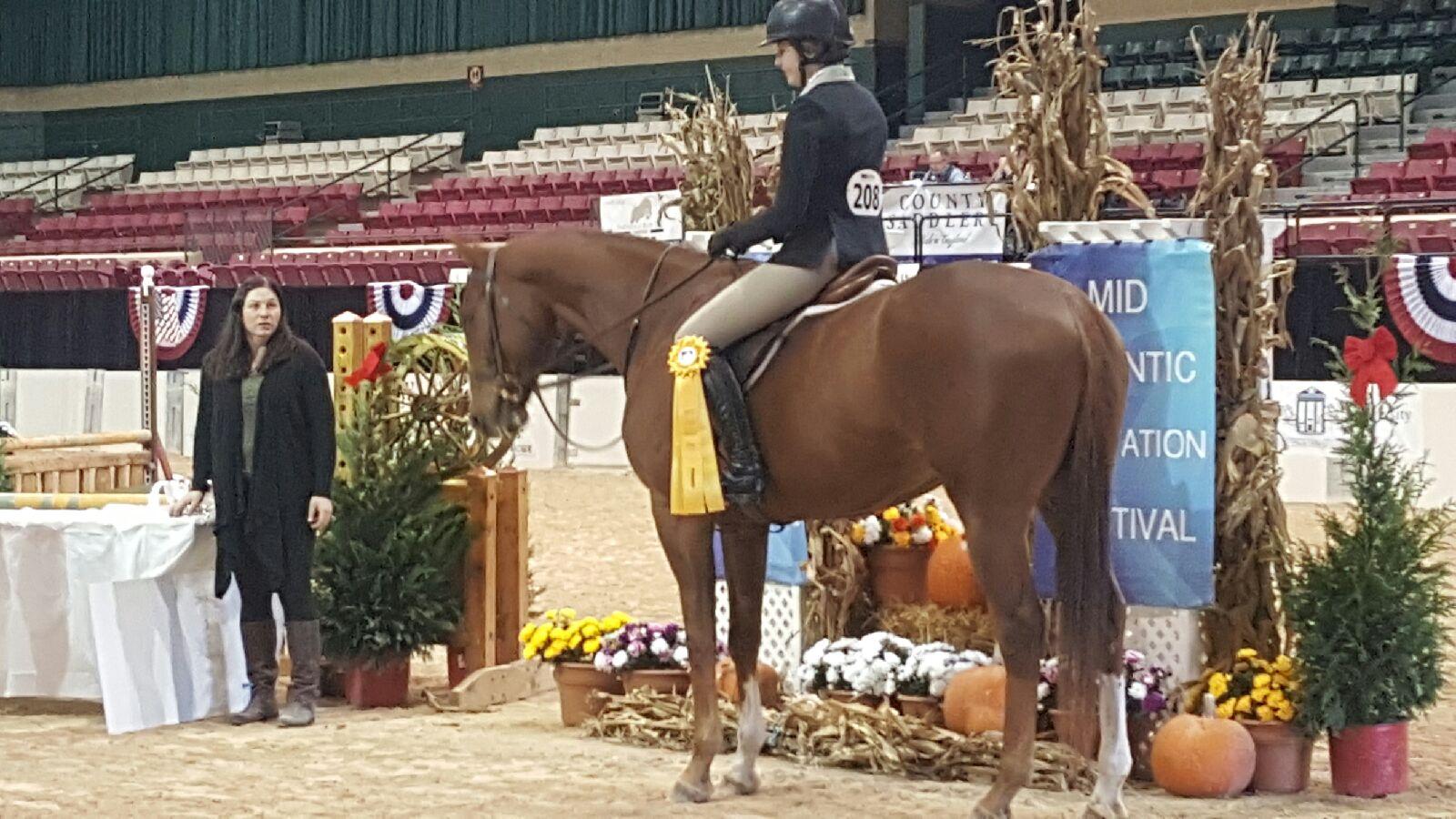 Jack of Hearts was true to his name and gave me his whole heart and best effort. We both learned so much from this weekend and enjoyed the rides together. Although I miss my Thoroughbred, riding any Thoroughbred is always a pleasure. This may be my last year as an official Ambassador for the Thoroughbred Incentive Program, but as before the program started and now after I leave my position, I will continue to promote this breed, my all time favorite!