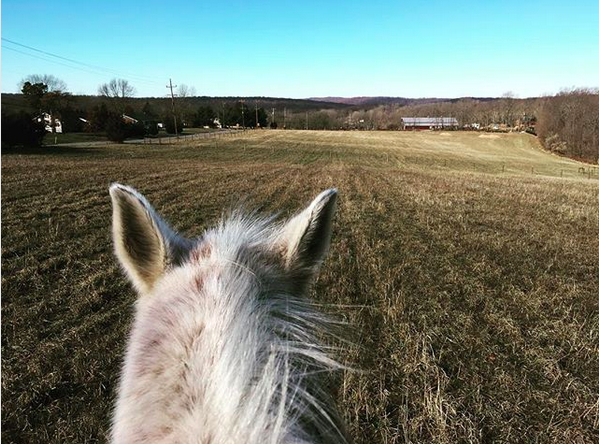 For trail riders, it’s often a combination of public and private land that makes this equestrian lifestyle possible. Kristen Kovatch details her recent experience and weighs the pros and cons of each.

With the kind of blinkered point of view that only a 17-year-old teenager can possess, I packed my bags after graduating high school in my comfortably suburban hometown, selecting my college based largely on its rural setting and working summers in the mountains of Wyoming on a guest ranch in a state that had a lower population than my home county. There were too many people at home, I believed, and not nearly enough open space to breathe… let alone ride. The housing developments had encroached on my childhood barn, with rooftops now visible through the woods that had felt endless when I was a kid on a post-lesson trail ride.

The rolling forested hills of western New York and the rugged mountains of Wyoming were more my speed. I’ve now made western New York my permanent home, relishing the views of forested and farmed hills rolling over the lakes and the sound of quiet in the woods, rather than the constant rush of four- or six-lane traffic that was the soundtrack of my youth. There are horses everywhere here; it seems that every country road has at least two or three little backyard barns with horses grazing happily around the house.

With the wisdom that starts to come gradually with each passing year, however, I’ve also come look forward to my annual holiday visit to my hometown… both for the opportunity to spend time with family and visit friends, and go riding. Yes, the teenager who turned up her nose at the housing developments, constant traffic lights and horse properties fighting tooth and nail to hold on to their pasture space now looked forward to the trail riding opportunities offered by a county with a population more than six times that of where she calls home.

I rode out the day after Christmas with Eleanor, the owner of the farm where my mother boards her horse. The boarder base at this barn is pretty much 100% trail riders, and Eleanor found a plum property on which to build her farm that offers access through a section of woods to a public trail system that runs across the county. This trail connects to other various township trails as well as a large county park around a reservoir that offers miles upon miles of trails; intrepid riders could connect all the way to Valley Forge National Historic Park and from there pick up another system that would take them right into Philadelphia if they wished, all without leaving the extended trail network. 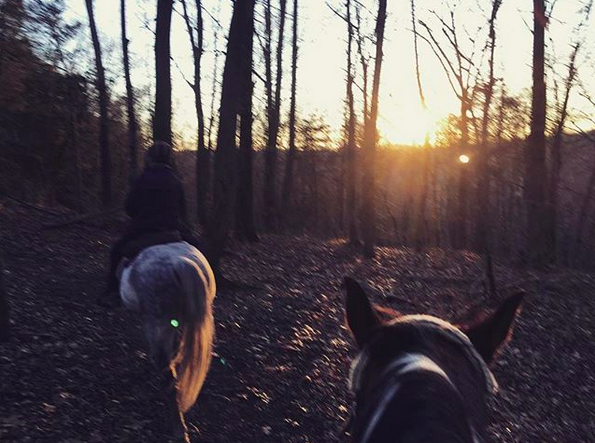 A terribly blurry photo on the public trail system. Photo by Kristen Kovatch.

On this particular day, Eleanor and I simply meandered through the woods down to the Perkiomen Trail, the graveled and graded multi-use trail system that connects some of the county’s more scenic little villages along the Perkiomen Creek. Horses have the right-of-way on the trail, and despite temperatures below freezing the surface of the maintained trail offered great opportunities for us to trot and canter (or rack or pace — I was mounted on Eleanor’s spotted mountain horse who is gaited).

The next day, we headed off in the other direction on the Perkiomen Trail, which included two bridges over the creek as well as three road crossings. The biggest of these crossings certainly required a traffic-safe horse, as trucks and cars roared by just feet away from where our mounts stood quietly, waiting for traffic to cease.

Just twenty minutes of walking later, we connected with the county park, which includes 25 miles of multi-use trails. We moved out along the graded, graveled sections, wishing happy holidays to other park users who waved as our horses went by; eventually we chose a wooded trail peppered with boulders that challenged our horses to pick their way around carefully.

“It’s funny,” I mused aloud to Eleanor as we rejoined the main trail that would take us back out of the park. “We have so much open space at home that’s not tied up in houses or roadways or towns, but the trail riding in some ways is so much better here.”

Having worked with the various trail councils in the county in the past, Eleanor was quick with a response — a larger (and yes, more affluent) population meant not only more people interested in equestrian pursuits and trail riding, but a bigger tax base to help fund these projects and the county park system. From Eleanor’s farm, her boarders have access to over 85 miles of county-funded and -maintained trails — and that’s only counting this big park and the closest trail system, not including the other connecting systems and other parks that one could feasibly ride to with enough hours in the day.

As farmland turns into housing developments and shopping centers with the expansion of small towns into larger suburbs, this population is also interested in preserving some open space for shared public use — permanently. So as long as the privately-owned horse farms themselves can hang on to their spaces, there will always be places to ride.

Private trails, just for me

In contrast, I have a lovely several-hundred-acre farm on which to ride at home in New York, and I count my blessings every time I saddle up and go for a ride. This county, with a much smaller population, is still largely agricultural, meaning that the majority of horse owners here ride on their own property, or perhaps on neighboring farm fields as per agreement with the individual land owners. (We do have a 25-mile public system strictly for equestrian use in the north part of the county, but I haven’t headed up that way to try it out yet.)

I see pros and cons to each arrangement between my parents’ home county and my own: I love having the “playground” as I call it of farm fields, creek crossings and woods to ride in, safe in the knowledge that at least for the next generation this space will always be here. Private land is private — I don’t have to share this space with the rest of the riding county, and I especially don’t have to share it with individuals who would prefer not to share their hike with horses (those people, sadly, are out there, fighting to block equestrian access to some spaces). Even at Eleanor’s barn, with all of its public access, there are plenty of spaces and acres for riders to go on a hack without having to leave the property.

Riding around the home farm in Pennsylvania… with plenty of houses along the edge. Photo by Kristen Kovatch.

But when these pastures get dull and I need a change, it’s a public trail system to where I’ll be headed. The beauty of this public land system is that all of us are technically land owners, which means that all of us have access to these spaces designated for public use. For some horse owners, this might be the only access to trails that they can get — and for the opportunity for all of us to enjoy wide-open spaces, I am grateful.

Where do you ride — public land, private land, or both? Let us know in the comments section!