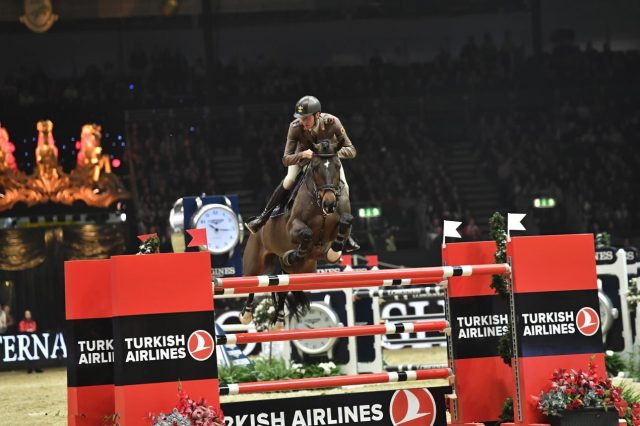 Oh honey child, Auntie needs her smelling salts! Alberto Zorzi and his stunning 13-year-old Oldenburg mare Contanga looked fresh and fast to win the final Olympia Grand Prix Monday evening and steal the hearts of every fan in the stands.

An impressive 11 horses made the jump-off, and fast and clear were the only way to come out on top. Contanga was absolutely game for every stride and every distance to edge their next closest competitor – Harrie Smolders and Zinnius – by less than 0.2 seconds.

If you didn't manage to catch the Turkish Airlines Olympia Grand Prix, here are the highlights. #OlympiaHorse

“I think she is the best horse in the world, very scopey, very special,” said Alberto of Contanga. “The feeling over a fence is amazing. This is an amazing indoor show. I love the Christmas atmosphere and am so happy to be here.”

Alberto took over the ride on Contanga in July from Athina Onassis of Greece, who is still the mare’s owner. Since then the two have had 16 FEI starts and have been in the top ten seven times. They’ve only had one FEI class with eight faults or more, meaning that Alberto’s proclamation of her talent may not be hyperbole.

They’ve had two World Cup qualifiying finishes, so if they can manage to peak at a few more events between now and March, they’re good candidates to qualify for the World Cup Final.

Keep it locked on JN for more highlights from Olympia and beyond! Go Jumping.