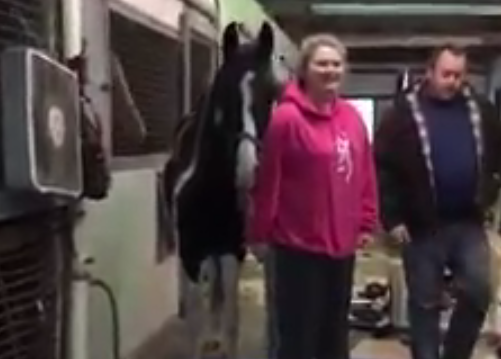 This horse is exactly who Santa had in mind when he decided to start doling out lumps of coal.

We’ve all been there with a naughty horse or two who’s good at opening stall doors and has a little fun overnight in the barn aisle. There might be some loose hay thrown around, a trash can knocked over, maybe some blankets taken off their racks and manure cast everywhere.

And then there’s Zeke.

Zeke’s owner Teri Grooms shares the story: “My daughter, Hannah, study’s music at Coastal Carolina University in Conway SC and had gone out to practice in her music room, she is the one that actually discovered Zeke first in this new mess and called me, not telling what he had done now just to start video taping before I opened the door. The video is typical Zeke. If he can figure it out he’s into it. He keeps us quite amused!

“Zeke is also called Houdini. He gets out of just about everything but his stall. In the video Zeke was placed in a temporary stall instead of his own. Zeke was never in any danger because we have a lockable door handle on the feed room door, ‘because we know Zeke’ and it stays closed at all times.”

???????????????????? Zeke! Did this he tore down the board across he’s area and had a ball last nightVideo owned and posted by Teri Tyndall GroomsNot to be reproduced in any other video or area without full written permission. Thanks so much

Zeke is more than a master locksmith, however — Teri shared his amazing story with us.

“I breed and raise Tennessee Walking Horses. I purchased  Zeke in 2016 as weanling. I fell in love with him from a Facebook video right after his birth, and I sent a deposit immediately. My plans for Zeke are to show him and breed him in the future.

“When he arrived by hauler later in the fall he was in very poor health due to worms. I wormed him several times over the next two of months for them only to return, so we took a trip to our local vet. She did a stool sample on Zeke and stated she had never seen an animal especially of that young age so full of parasites. She wormed Zeke with Quest and informed me he probably would colic and he did! I spent that night with him in his stall. Zeke tried to stop breathing twice but I refused to let him go, so I made him breathe. He pain was awful. I told him he was not leaving me because I knew in my heart he was destined for greatness and my love for him was too great. It was very touch and go for about 3 days. Zeke’s condition was so critical when he laid down my husband and I would literally have to pick him up, because he was so weak he could not rise on his own.

“It took Zeke about three months to get his strength back. I still have the video of his first canter! It was amazing. Zeke is fully recovered now and into everything. Zeke and I have a very special bond and yes he is spoiled rotten! My fault, I must admit. He loves everyone and everything and has the most exquisite mind. He’s not scared of anything, and I have to keep him quite entertained. He has an array of toys and still finds stuff to get into. Zeke knows his name and will come when you call him, but just know once he’s there, he’s with you until you put him to bed.”

Okay, Zeke, we guess you can still be on the good boy list.