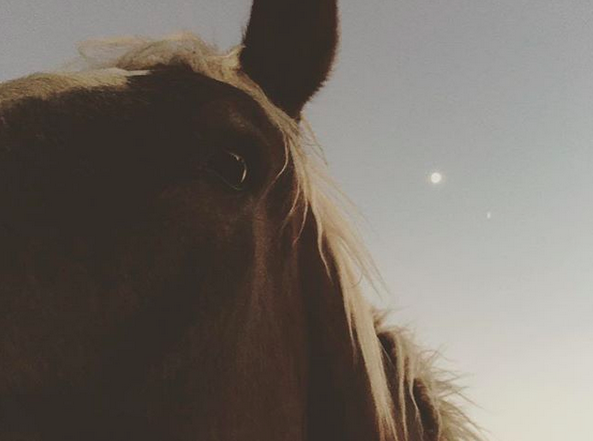 The longest night of the year comes in December.

December should be a time of celebration, a time of fellowship — an opportunity for all of us to forget our various differences and simply love each other. No matter your particular set of beliefs, Christmas itself falls just a few days after the shortest day of the year, serving as a little reminder that we’ve made it through the longest night and the darkest time.

The first full week of December, however, has already tested the horse world more than we thought possible. By now, it’s likely that you’ve seen the viral video filmed by a courageous groom — Leo Tapia — at San Luis Rey Downs training center in southern California as he and his comrades run into thick smoke and flames to try to save as many horses as possible from rapidly-moving wildfires that grew with little warning. Some of these horses were lost, but many more made it to safety thanks to these brave individuals, many of whom lost everything themselves when the track that they called home went up in smoke. The courage shown by these individuals is sobering and humbling, yet uplifting and inspiring, a reminder that in the hardest, most trying times, we will find strength we might never know we had.

I’ve never had to test myself against a literal hell of flame and smoke; I’ve been very lucky in my comfortable horse life and have never been in that scenario of life-or-death decisions. I’m willing to bet that most of you reading this piece have never been there either.

But we all have our own well of courage within us to draw upon. Our battle might not be against smoke and fire and we may not need to react in split-second decisions to save a life — we may be battling invisible demons of fears and doubts that have accumulated over the years. It takes courage some days just to put a foot in the stirrup and swing aboard; it takes courage sometimes simply to ask a question — especially in the social media age, where everyone has an opinion whether it was asked for or not.

Right now, as you’re reading this, there’s a rider somewhere needing to find their courage — perhaps a youth rider moving up a level of competition, perhaps an adult rider returning to the saddle after many years away, perhaps a professional recovering from a bad fall whose fearlessness is suddenly gone. As the saying goes, everyone is fighting their own battle that you may not be able to see — be kind.

It’s December — which means this is my twelfth “Letter From the Editor” this year. Writing this series took a different brand of courage: the courage to pour my thoughts and feelings on a particular subject onto the page where thousands and thousands of readers could see them, and of course share their own thoughts and feelings and criticisms as well. Social media and the internet, as we know, is not always a kind place. My goal was to remind readers that we’re all human — we all struggle, we all have doubts, we can all use a helping hand and a kind word from time to time, and no one has all the answers. I hope you found a few helpful words along the way this year.

It’s easy to forget sometimes when we read our favorite websites and blogs that it’s a real person putting pen to paper (so to speak), forming words into sentences and sentences into stories. The horse world in particular seems to draw way more than its fair share of critics, individuals who not only know everything but want to make sure you know that they know everything as well. I’ve never been able to figure out why this is — most people have a cars, but they don’t think they’re car experts. So why does having a horse suddenly turn them into an instant horse expert?

Simultaneously, in times of great trial, this fractured and fragmented horse world comes together. The outpouring of support from all over the world for displaced horses and connections in the tragic California fires has been staggering, a tangible reminder that despite our differences, we take care of our own. It’s this feeling of fellowship I hope we can carry into the holiday season — the knowledge that even when things seem darkest, we are one strong community, helping each other through.