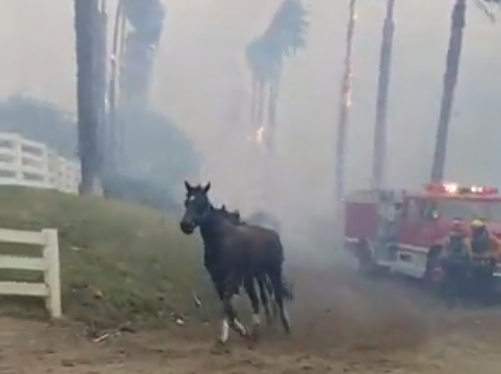 San Luis Rey Downs had little warning on Thursday, December 7 when fast-moving wildfire tore through the facility. Horses were set loose from burning barns and hundreds were evacuated to Del Mar Fairgrounds — but they’re in need of help.

Wildfires are a harsh reality of life in southern California –but the Lilac Fire, which began on Thursday, December 7 north of San Diego, grew much quicker than anyone could have imagined, forcing 100,000 residents to evacuate while thousands of structures were threatened. The fire moved quickly towards San Luis Rey Downs training center, and while a small number of horses were able to evacuate immediately to Del Mar Fairgrounds, rapidly-changing conditions forced road closures, with access severely limited to the track to continue evacuation.

Much credit should be given to the brave souls working at San Luis Rey Downs, who charged back into burning barns and thick smoke to set loose as many horses as possible. While the logistics of capturing and identifying the herd of panicked Thoroughbreds who thundered around the facility seems overwhelming, it’s a welcome alternative to what could easily have happened had the grooms and staff at San Luis Rey not stepped in to save as many as possible. Their heroic actions gave these horses a fighting chance.

This video may be upsetting to some readers, filmed by Leo Tapia who ran from stall to stall in burning barns. While Tapia is overwhelmed by thick smoke at times, he continues to hustle, likely saving many more horses’ lives:

When the immediate threat of fire shifted on Thursday afternoon, transporters were again allowed inside San Luis Rey Downs to evacuate horses, with all living animals taken to Del Mar Fairgrounds. Evacuations were complete by 10 PM on Thursday. As of this morning, no live horses remain at the training center; an estimated 25 perished.

American Association of Equine Practitioners, or AAEP, is already working with vets in Southern California and is accepting donations via the Disaster Relief Fund to continue supporting those vets. Select “Disaster Relief” when donating.

California Thoroughbred Horsemen’s Association is collecting donations to assist victims of the fire. When donating via the website, select “Add Special Instructions to Seller” and then type in the words “For victims of the SLRD fire.”

Del Mar Fairgrounds is now in need of supplies — it’s serving as the evacuation center not just for San Luis Rey Downs but for multiple horse owners and facilities in the evacuation area. Particular needs include pitchforks and rakes, buckets, bedding and feed. Del Mar has stated it currently has enough volunteers to help care for horses, watch for signs of colic and identify tattoos and markings on the Thoroughbreds evacuated from San Luis Rey. Donate via the website.

Little Red Feather Cares is accepting donations to assist with all horses and horse owners affected by fire. Earmark your donation by typing “FIRE” in the comments.

Local feed stores are accepting donations over the phone to assist displaced horses:

Thoroughbred Charities of America is prepared to assist San Luis Rey Downs horses, once the immediate crisis starts to resolve and needs are assessed. TCA aided the race horses of Puerto Rico after two hurricanes devastated the island earlier this year. Visit TCA’s website to make a cash donation.

Santa Anita Park, Stronach Group & Del Mar Thoroughbred Club are joining forces through GoFundMe to raise funding to buy needed supplies for evacuated horses, including bedding, feed and supplies for horses, as well as medical bills; funds will also support those individuals who lost everything at San Luis Rey Downs such as grooms and staff who lived on the premises.

USEF Disaster Relief Fund is accepting donations via its website.

Our hearts go out to all those affected by wildfires.