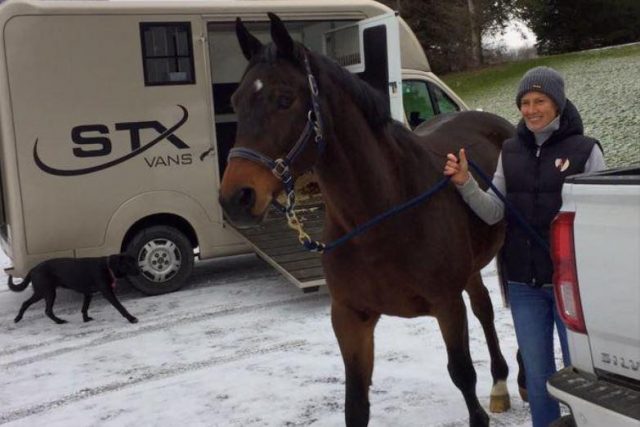 A senior center fit for a king!

A legendary horse deserves a legendary retirement, and that’s exactly what HH Carlos is getting at this very moment. Thursday morning, the 15-year-old Zangerscheide gelding arrived to John and Beezie Madden’s beautiful farm in Cazenovia New York looking wintery and puffed for his well-earned golden years.

The world-class horse owned by Double H Farm officially finished his competition record with a win at the Washington International Horse Show in October when he and McLain won the $50,000 Speed Class and his longtime rider announced it would be the horse’s final performance.

At the time, a decision had not been made as to where the gelding would get to frolic for his retirement, but you’d be hard pressed to find a better option than Madden Mountain. John and Beezie have put together an amazing and thoughtful retirement facility there with natural horse living in mind, where horses can just be horses and not athletes. This includes almost 24/7 turnout, ergonomic but low-risk group feedings, beautiful barns and loads of senior care amenities.

In 2016, the team  at John Madden Sales broke ground on a new, incredible facility built exclusively with the retired champion in mind, and their VIP tenants include Beezie’s Olympic Gold Medalist partners Cortes ‘C’ and Authentic, and many other wonder-pals from her career such as Cloud Nine, Coral Reef Via Volo, Prima, and Conquest II.

HH Carlos had a tremendous career that includes more than forty FEI wins on two continents and more than a dozen Nations Cup teams. In 2014, he and McLain finished ninth in the FEI World Cup Final in Lyon, France in one of McLain’s best finishes.

We send a very happy retirement to Carlos in the lap of luxury!