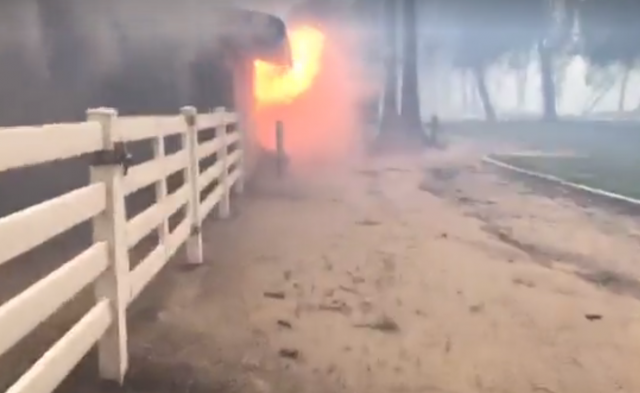 Fueled by dry conditions and Santa Ana winds, rapidly-moving wildfires are burning hundreds of thousands of acres in the greater Los Angeles area as well as new fires breaking out outside of San Diego.

A lack of seasonal precipitation has created bone-dry conditions in Southern California, providing plenty of fuel for rapidly-moving and unpredictably-spreading wildfires in the greater Los Angeles area. Fanned by the gusty Santa Ana winds of late autumn, four large fires and several smaller fires have burned an estimated 116,000 acres as of Thursday morning. Thousands of firefighters are battling the Thomas Fire outside of Ventura as well as the Rye, Creek and Skirball fires closer to Los Angeles, with an estimated 300 homes and business already lost.

The Creek fire burned the well-known Middle Ranch of Lakeview Terrace, home to several well-known barns including Archie Cox’ Brookway Stables and Dick Carvin and Francie Steinwedell-Carvin’s Meadow Grove Farms. Fortunately, all horses on the property were evacuated to safety on Tuesday in advance of approaching flames.

Video from Jorge Hidalgo of Brookway Stables shows a terrifying scene, in which Hidalgo and others still on the property are sent to the riding ring as the safest place as flames take the barns around them. Conditions on the roadways made leaving impossible. Fortunately, all are now safe!

So sad to see our barn go up in flames

Equine evacuation centers have been set up at Hansen Dam Equestrian Center, Los Angeles Equestrian Center, the Fairplex grounds and Antelope Valley Fairgrounds. Many smaller farms and ranches are also opening their doors to horse owners in need.

Some farms and ranches have not been as lucky as Middle Ranch — due to the fast-moving nature of these wildfires, some larger facilities had only enough time to get people to safety. Thirty horses reportedly died in the Creek fire on Wednesday when the owners were forced to flee for their lives early in the morning with no time to evacuate stock to safety.

As fires are still raging, with only 15% estimated to be contained, few wide-scale relief efforts have been set up at this time. So far, Damoor’s Feed and Tack of Glendale, California has pledged support to affected horse owners:

While no announcement of aid has been made formally by US Equestrian, interested individuals can always donate to the Disaster Relief Fund to help fellow equestrians in need. We will continue to monitor this story as fires burn; the weather forecast for Friday and Saturday shows that winds may diminish which may allow firefighters to gain some control over the flames.

Our thoughts at Nation Media are with all of those affected by wildfires.

Two fires at 0% containment –called the Lilac and Liberty fires — are spreading rapidly north of San Diego, threatening numerous farms and equestrian centers. Evacuation points for horses have been opened up at the Del Mar Fairgrounds and Del Mar Equestrian Center, among other locations.

The San Luis Rey Downs race training facility was a scene of chaos as an estimated 50 horses were turned loose by track staff when their barn caught fire. Some horses were able to evacuate to Del Mar Fairgrounds before road closures forced drastic measures, emphasizing the speed at which the Lilac fire has progressed in just one afternoon, growing rapidly from a thousand to two thousand acres. Individual trainers have confirmed equine deaths, but with fire still active in the area both rescue trailers and individual autos are not being granted access so a total head count of loss is not yet known.

Nightmarish video from a brave individual who turned loose as many horses as possible at San Luis Rey to save them from encroaching flames shows the heartbreaking scene. This video is hard to watch as a horse lover, and some readers may find it disturbing.

We will continue to follow these stories as they develop.