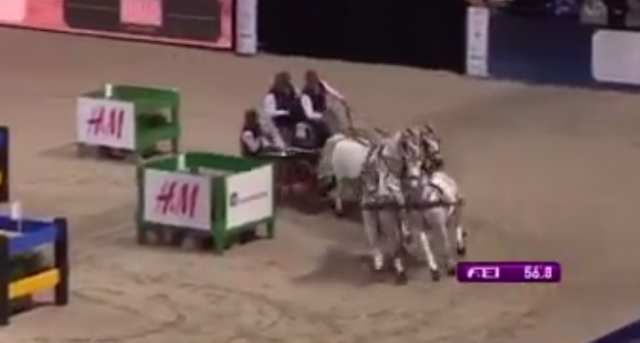 USA hasn’t had a driver in the wildly-exciting FEI World Cup Driving series — until now. Chester Weber is trying his hand at the indoor circuit in Europe this winter!

FEI World Cup Driving has long been the domain of Europe’s fiercest competitors (and, of course, Australian Boyd Exell who has dominated the series for years). In an indoor arena setting, drivers and their four-in-hand navigate a kind of mini-marathon/cones course (much like arena eventing, which combines elements of cross-country and stadium jumping) while music blasts and the crowd claps along. It’s exciting, it’s adrenaline-pumping and Team USA’s combined drivers have sat it out almost completely — until now.

USA’s Chester Weber, hands-down the most accomplished four-in-hand driver in the nation, earned his qualifications over the summer driving at some of Europe’s most prestigious outdoor combined driving events (which include driven dressage, marathon and cones). Weber never does anything halfway — so when the stars aligned and he was able to put together a talented indoor team of Lippizans, Team Weber decided that this was the year to move indoors for the winter:

He's won the US National Championship 13 times ???? But can driving sensation Chester Weber take a win in his first European competition? See how he does at the Stuttgart German Masters this weekend live on FEI.TV ????

For Team USA’s first major contender in the FEI World Cup Driving series, Weber is holding his own — he’s currently in fifth place for the season with eight points, having had respectable middle-of-the-pack finishes so far in Stuttgart and Stockholm.

Here’s a video clip from Stockholm:

Chester Weber continues to hold his own in the FEI Driving World Cup series in Stockholm today. Go USA!!!

Weber competes this weekend in Geneva and again the following weekend at London Olympia. We’ll be following our first American representative to the FEI World Cup Driving as the season progresses.