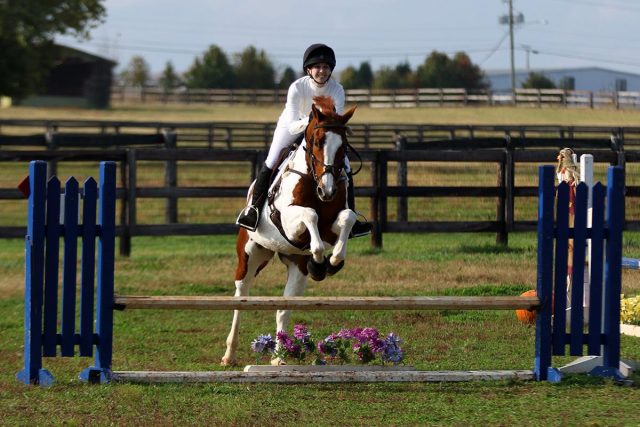 It’s been a year and a half since Ainsley and her horse JJ last tackled a three-phase competition, sidelined by human and equine injuries. We’re pleased to share the story of their first competition back in action! 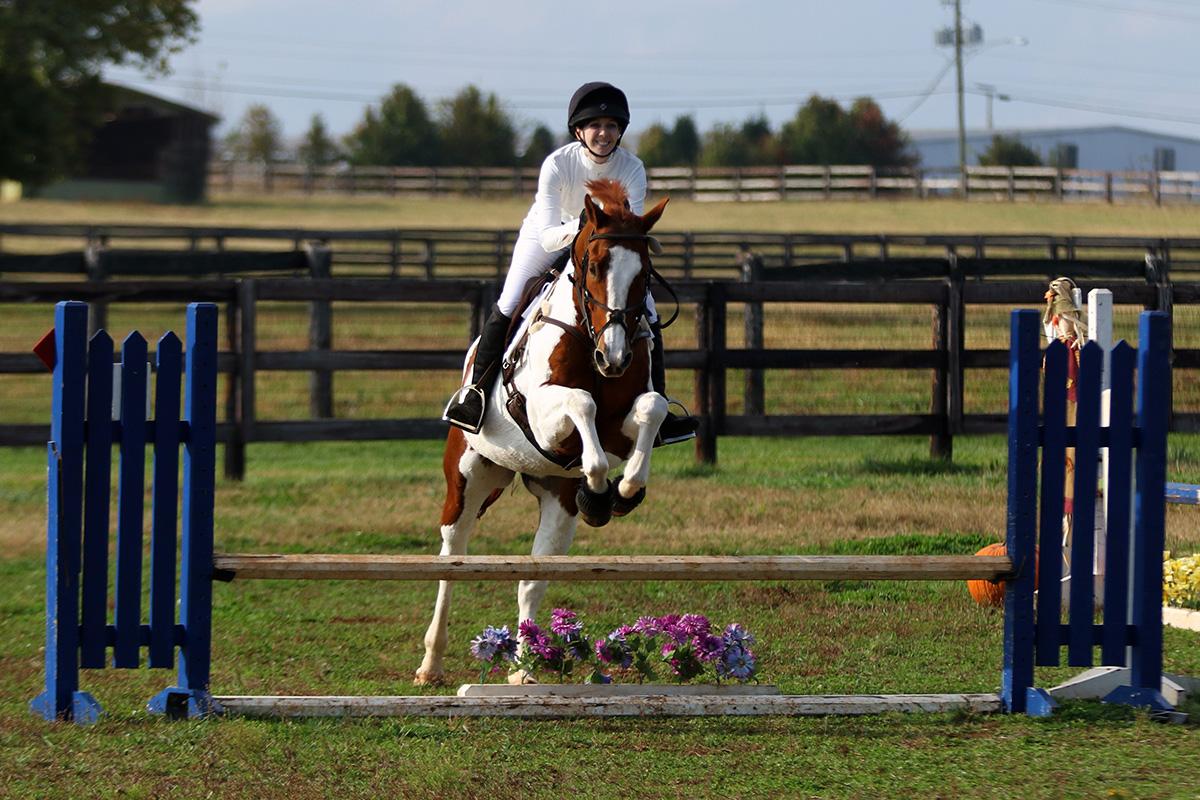 Those knees, that smile – we both had fun! Photo by Erik Jacobs / P.TEN Marketing

The day we’ve been waiting for finally happened – after a year and a half, JJ and I completed our first “post-injury” three-phase event and we had SO MUCH FUN!

It’s been a long journey, but I am beyond thrilled to say we’ve come full circle. What started with JJ going lame on April 1st, 2016 (worst April Fool’s Day joke ever!!) and eventually progressed to me going lame myself has been a struggle for us both. We’ve suffered through vet visits, surgeries, and rehab, but we did it together and I think our bond is much stronger because of it.

Earlier this year, I moved JJ to a new barn, Milym Equestrian, with my previous trainer, Miriam Offermanns. There, he recovered well and we both regained much of what we had lost.

During the summer, after serious strengthening work for me and for JJ, I decided we were both “healed” enough to try eventing again. It was too hot for me to want to attempt anything in the heat (thanks, Atlanta) so I set my sights on a fall show. I wanted the experience to be as positive, as fun, and as low-key as possible for us both, so I chose a schooling show at Rebecca Bowman’s North Atlanta Equestrian in late October.

We worked hard to get ready for the show, and JJ was feeling fabulous. Never before had he been so relaxed and so willing. I was falling in love with my amazing horse all over again, and was super excited about our upcoming event.

My friends were all incredibly encouraging along the way, and their enthusiasm was contagious. Many of my drag racing friends (from the other side of my life) took an interest, too, which was really cool. And, after explaining the sport of eventing to them, I thought it was hilarious to hear guys whose racecars go 0-200+ mph in 3.8 seconds say “wait, that sounds dangerous!” Ironic, yes?

I usually like to school my cross country course the night before a show, if possible, but due to scheduling, at first I didn’t think I would be able to in this scenario. I committed to being a [email protected]$$ and said, “hey, sure, we’ll just go into it without schooling first – why not?”

Well, it turned out that I would be able to school beforehand, and I was even more excited than ever. Unfortunately, Mother Nature had other plans and a big storm was predicted to hit the area on the day of the show, so Rebecca did the wise thing and postponed until the following Sunday, November 5th. Luckily, I was still able to go!

…except that I had my best friend’s baby shower to host the day before. It seemed that fate had stepped in to kick me in the butt and say “well, you wanted to do this show without schooling first, so now you don’t have a choice.”

The weird thing was, though, I had absolutely zero expectations for the show. I’m normally a very competitive person. I want to do well, I want to be the best, I want to win. For some reason, this time, I honestly could not have cared less about doing well – all I wanted to do was survive. I had decided that if we jumped all the things, I didn’t fall off, and we didn’t get disqualified, then it would be a huge success. I simply wanted to get me and JJ familiar with eventing again, and to make sure we could both handle it safely and soundly. For me not to go into it hoping to win was weird, and I had significantly less “show anxiety” as a result.

My trainer, Miriam, was 37 weeks pregnant by the time the show rolled around and Rebecca was kind enough to schedule my ride times later in the day so as not to make her suffer too much. We started the day by loading JJ onto the trailer (he’s such a pro) around 9:30 am and then headed over to another barn about an hour away to drop off one of Miriam’s baby horses. Next, it was a quick 15-minute ride over to NAE, and we arrived right on schedule at 11:00 am.

When JJ walked off the trailer, though, Miriam immediately noticed that he was bleeding a little from his left hind – it seems he had stepped on himself. Of course, after all of our lameness issues, I freaked out and thought about scratching, but Miriam assured me that’s exactly what it was – just a scratch!

After grooming JJ, I gave him some hay, tied him to the trailer, left him with my husband, Erik, and went off to find/walk my courses. I’ll admit, the cross country seemed a little intimidating after having been away from it for so long, especially with some hilly terrain and no prior schooling, but I decided to heed the wise advice of my former trainer and just “ride the first jump. When that goes well, ride the second. When that goes well, ride the third. And so on, and so on…” Miriam agreed, and said I should “just go out there and pretend it’s schooling. If at any point you aren’t sure or feel like he isn’t right, just call it quits.” So, I decided to buck up and go for it.

We started with dressage and had a decent warm up. JJ seemed happy, but coming down the center line at the beginning he realized, suddenly, that there was a big judge’s tent and “OMG ARE WE DOING THIS FOR REAL?!” and added a “spook at C” movement to our Beginner Novice Test A. He came back to me very quickly, though, and we proceeded on like it hadn’t happened. It was a solid test – not our best, and that’s totally fine by me – but we had some moments I was really proud of. We scored a 35.00 and I was thrilled with that score for our “first time” back!

There was a two hour break for us between dressage and stadium, so I was able to walk the jump course and it was exactly what I had hoped for – straightforward and fun. (Thank you, Rebecca, for not trying to kill me!) There were a couple jumps that I thought JJ might be a little looky at, so I set my strategy and planned to ride defensively.

He was a little lazy in warm up, but I’ll take that any day over the crazy days we used to have. When it was our time to ride, we headed into the stadium arena and got down to business. The first jump on the course was a patterned plank fence, and JJ had spooked at it when we were here back in 2015 so I expected the same, but he didn’t even glance at it and jumped like a boss.

He continued to do the same throughout the course, and each jump was better than the last. We were both having fun, and I was smiling like a little kid over every fence. I was so proud of how well he was behaving, despite the fact he must have been so excited to get back to what he loved after so much time off.

Feeling good from our stadium round, we took a few minutes to cool out before heading over to cross country. A shortened warm up was all we needed, and JJ and I were off! Running like a recognized with no prior schooling concerned me a bit as I haven’t had much luck with that in the past, but once again, JJ surprised me.

From the very first jump all the way to the last one of the course, JJ was a total rock star. He had a lovely pace, a wonderful attitude, and said “sure thing, mom” to every jump – even the ones I could tell he wasn’t entirely confident about. It felt effortless, and we crossed the finish five minutes later to officially complete our first event back after 1.5 years off. I may have definitely yelled “I HAVE THE BEST HORSE IN THE WHOLE WORLD!” as we ran through the timing flags, and Miriam may have definitely shed a tear or two. 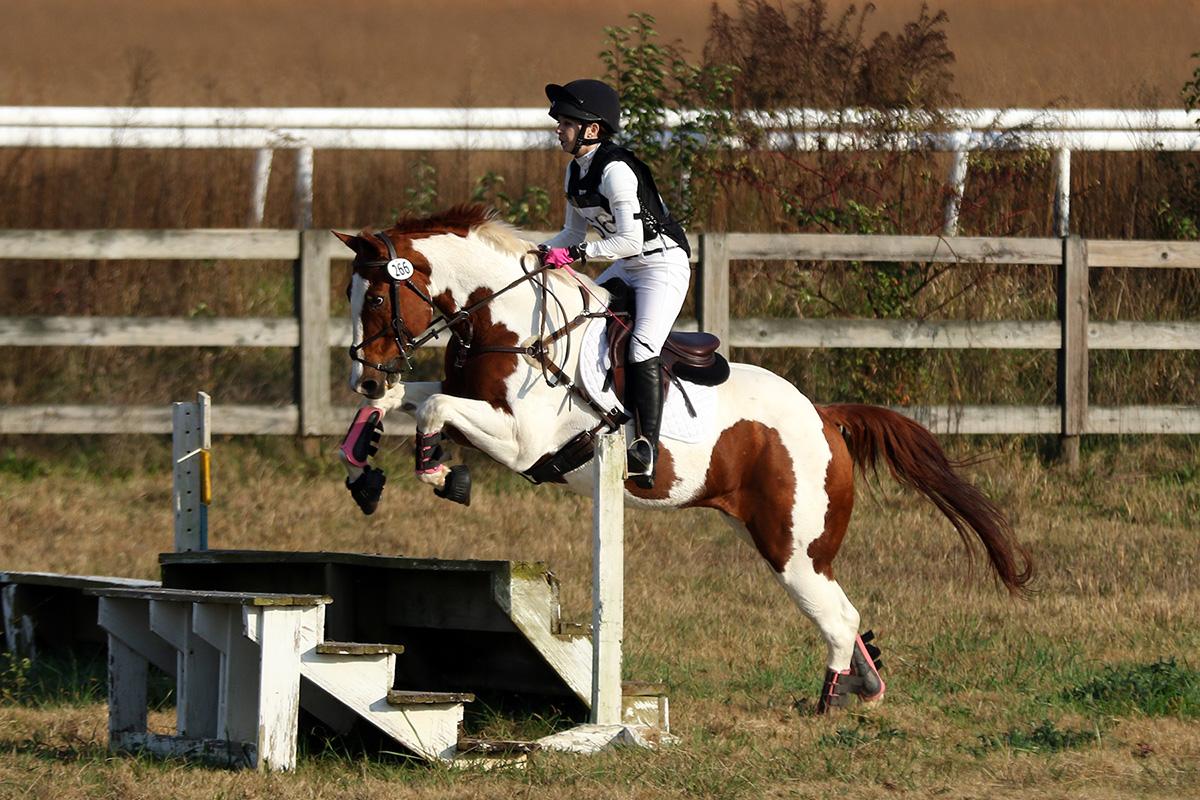 Incredibly, we wound up finishing second in our division, just one and a half points behind first. I couldn’t have done it if not for the support of my amazing husband, Erik, Miriam’s superb coaching and training, and the help from fellow Team Milym rider, Maris Barden, who came along for the day to cheer us on.

All in all, I was beyond pleased with JJ’s performance. He exceeded every expectation I had, and I am so proud to have him as my partner. This wonderful little horse has got my heart, and I hope I’ve got his, too.

When you stop caring about what happens, you’ll have the most fun.

Also, if you commit to being a [email protected]$$, fate will ensure you stick to that promise.