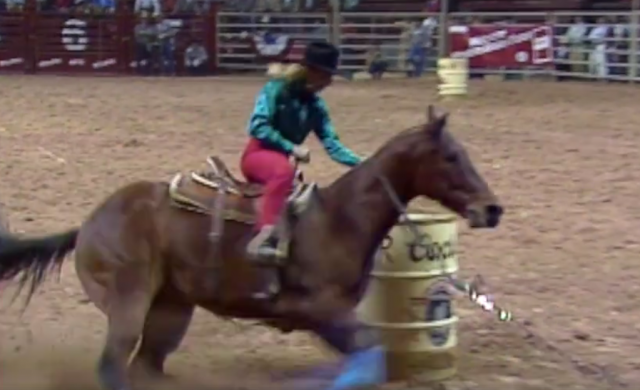 No bridle, no problem for the legendary duo Charmayne James and Scamper: watch this iconic run from the National Finals Rodeo in 1985!

Charmayne James is a legendary figure in barrel racing, thanks in large part to her partnership with the incredible Gils Bay Boy — better known as Scamper. On an ordinary day this team was hard to beat: they earned ten Womens Professional Rodeo Association world championship titles, with James coming in to the 1987 National Finals Rodeo as the highest-earning competitor in any event.

But it was an extraordinary moment that would truly elevate James and Scamper from legend to near-mythic status: watch this round from the 1985 National Finals Rodeo, the seventh night of the ten-night competition.

#WranglerNFR Legends: One of the most iconic barrel racing runs in history happened at the 1985 National Finals Rodeo. Charmayne James and her hall-of-fame horse, Scamper, experienced a broken bridle during the run, but still recorded a 14.40-second time to win the round and ultimately the 1985 World Barrel Racing Championship. Charmayne James was inducted into the 2017 ProRodeo Hall of Fame.

On the run-in, Scamper caught the bridle on a gate and popped a Chicago screw loose, causing the headstall to come apart. While James was able to keep enough tension on the reins to keep the bit in Scamper’s mouth for the first two turns, despite the headstall whipping dangerously about near Scamper’s legs, the gelding managed to spit the bit out around the third and the pair finished their run with no bridle at all other than the bit and reins flapping about his neck.

Despite the equipment failure, the pair still stopped the clock in 14.40 seconds, winning the round and ultimately winning the championship title for 1985.

Scamper passed away in 2012 at the age of 35; he does have an intact clone standing at stud named Clayton. Although the AQHA does not recognize the offspring of clones, Clayton’s progeny have enjoyed success at non-AQHA events.

The 2017 National Finals Rodeo kicks off in a week on Thursday, December 7!