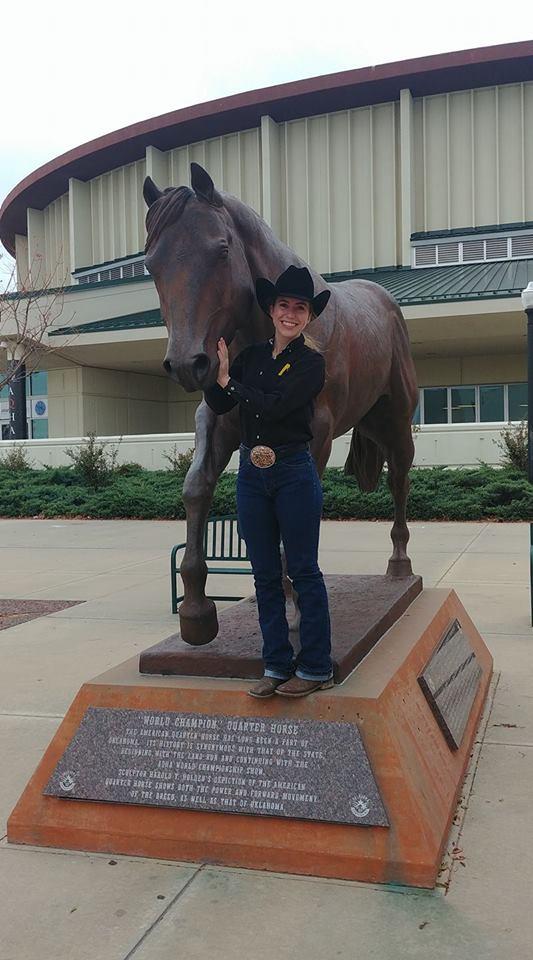 Especially a loss at the World Show.

Haley at the World Show grounds. Photo by Peggy Shank.

During my first year as a college student, I started out showing in the Novice division on Alfred University’s Western IHSA team. During the regular-season shows, I was undefeated, pointed up into Advanced, and qualified for Semi-Finals that spring. At Semi-Finals, I showed in Individual Novice and rode in Advanced for team points. I placed fifth in my individual class, missing Nationals by one ribbon, and ended seventh in Advanced, earning zero points for my team. My class was the last one of the show, so my performance was the deciding factor in whether or not Alfred University would move on to Nationals as a team.

When I came out of that class, I was disappointed in myself and felt that I had let my team down. I scared the living daylights out of my coach, Steve Shank, by getting teary-eyed when he gave me a hug. “I thought you had ice in your veins,” he told me this year, laughing about that day.

Last year, my sophomore year, my coaches moved me up to Open, where I competed in both reining and horsemanship. I dove into practices with a vengeance, knowing that my performance that hadn’t been good enough in Novice wouldn’t get me anywhere two divisions up. Although reining is my passion, I managed to qualify for Regionals, Semi-Finals, and ultimately Nationals in both disciplines. At Nationals with two of my teammates, I rode to a fourth-place finish in horsemanship with the help of three very forgiving mounts. This qualified me to compete at the AQHA Lucas Oil World Championship Show Collegiate Challenge.

Having probably spent more cumulative hours trail riding than at shows (and even then, only local open shows, IEA, and IHSA), this was an honor beyond anything I could have dreamed of at the beginning of the season. From August till November, I drilled horsemanship patterns and exercises under my coaches’ careful eyes in preparation to compete against the top IHSA and NCEA riders in the country.

At the World Show, I completely blew the very first maneuver of my pattern, breaking to the lope in my extended jog departure and never regaining the correct gait for the remainder of that maneuver. Thankfully, my misunderstood cue didn’t frazzle the horse I had drawn, and she was patient with me as we completed the rest of the pattern. I have ice in my veins, I reminded myself as I exited the arena with the lowest score of anyone in the Collegiate Challenge. If you’re going to be brought down a few notches, it might as well happen at the World Show, right?

Despite having to explain my mistake to all my relatives who called to tell me what a great job I did (“Thanks! …No, I didn’t win my point, that lope in the beginning was supposed to be an extended jog.”), I truly enjoyed my time in Oklahoma City and the opportunities I had to watch some of the best horses and riders the world has to offer. I even got to spend time with Becky Newell, editor-in-chief of the Quarter Horse Journal, and shadow her for a couple of hours while she worked on awards presentations, managed video footage of champions in every class, and conducted interviews with riders and owners. Wherever my riding has taken me, I have found kindness and generosity in the horse industry, for which I am eternally grateful.

On the way back home, Steve shared another piece of wisdom with me: “You ride better after you lose.” (Before anyone gets any illusions about Steve’s wisdom, shortly after this conversation he forgot his hat on the airplane, then went back to a different airplane to look for it.) However, in looking back at the change in my performance between IHSA seasons, I can’t say that he’s wrong. With this in mind, I’ve adjusted my goals for this year accordingly: learn (re-learn?) how to extend the jog, and come back even stronger at my upcoming show this weekend.