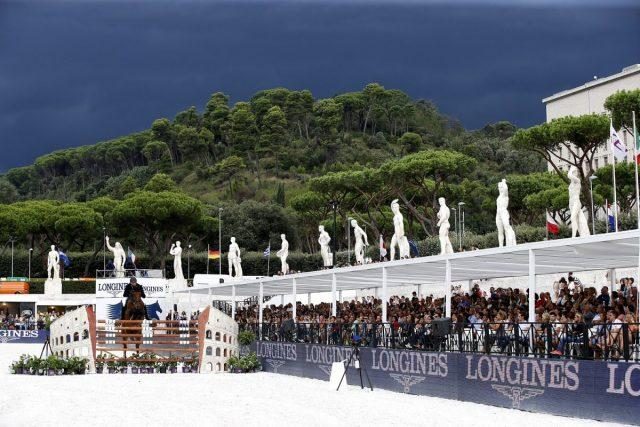 My fantasy vote goes to Rome, with dressage and show jumping to be held in the majestic Stadio dei Marmi and cross country running through beautiful Italian wine country! Photo by Stefano Grasso/Longines Global Champions Tour.

The 2022 World Equestrian Games is the hot potato of equestrian championships — nobody seems to hang onto it for very long. To recall, in December 2016 the FEI named Lexington and Slovakia’s Samorin the official candidates to host the WEG; then, in January, the Kentucky Horse Park withdrew itself from consideration, explaining that they did not think it would be “economically feasible,” leaving the Samorin Equestrian Centre as the only official bidder.

But at last week’s FEI General Assembly, it was announced that Samorin had decided to not sign the WEG host agreement and had subsequently withdrawn its bid. The FEI Bureau has decided to reopen the bidding process under a revised timeline, with the host to be allotted at the FEI Bureau meeting in November 2018.

“We are confident there will be candidates, but these are complex Games and we need to make sure we do it right,” FEI President Ingmar De Vos told the General Assembly.

Loads of candidates, we’re sure! Step right up!

We thought we’d kick-start the nomination process. Which brings us to this week’s “Let’s Discuss” question: Who would you like to see host the 2022 WEG? Think outside the box and remember — in this thought experiment, at least, money is no object!

It doesn’t have to be an established equestrian venue like Lexington or Tryon; consider the 2014 Normandy WEG’s conversion of a soccer stadium into its main arena. Lots of swanky NFL stadiums sitting around here collecting dust in the offseason, just sayin’. Maybe you’d like to see cross country run through Central Park or Augusta National Golf Club, or the rainforest or the Mongolian steppe. Dream big! Who knows, the FEI seems to be grasping for straws anyway, maybe we can shake loose a lead or two.

Share your wildest 2022 WEG fantasy venue in the comments section below!