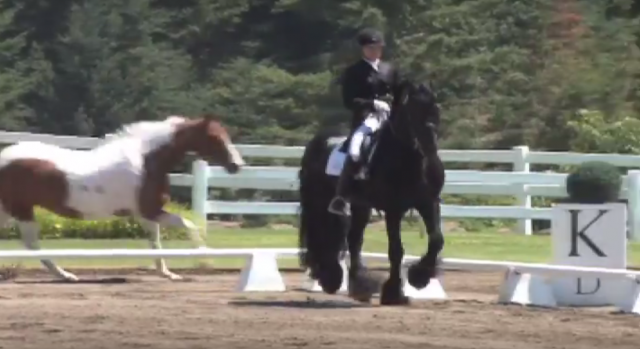 Monday is already the crappiest day of the week, so it only makes sense that we make things official. We’re rolling it back to 2013 and this blessedly focused Friesian stallion, who keeps his composure when a loose mare comes tearing past the arena during his Intermediare-1 freestyle.

Horse Rembrandt and rider Brooke Voldbaek remained calm and collected throughout the fiasco and, despite the distraction, won their class on a combined score of 67.500%. They were later awarded the Dressage at DevonWood’s Sportsmanship Award–and deservingly so!

Interested in breeding to a stallion that’s gorgeous, athletic AND has an apparently bombproof temperament? Learn more about Rembrandt here.

A big thanks to Equine Video Productions for the video! They provide state-of-the-art video and video production services to the Northwestern United States equestrian community–keep them in mind for all your farm, breeding program, business, product or event promotion needs. Also, shout-out to reader Liz Lawson-Weber for bringing this great “Oh Crap” moment to our attention!