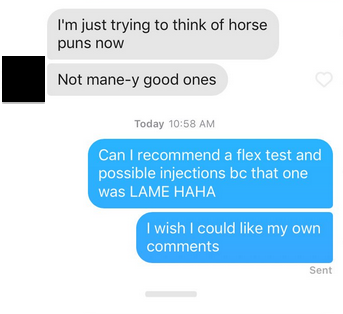 The dating scene already presents a number of challenges for the working equestrian: horses take up a lot of our free time, whether we’re amateurs or professionals. They also tend to eat up a lot of our budget that could otherwise be spent on coffee, dinner or drinks. Combine that with the fact that we tend to be pretty good at talking about horses and maybe not so much about anything else (see challenges 1 and 2 for the reasons why) and it can be hard to meet a nice non-horsey guy or girl, let alone one willing to put up with the unique equestrian life.

Dating apps, such as the wildly popular Tinder, can make these challenges a little bit easier — and on the flip side, they can make dating about a thousand times harder. Rachael is a professional equestrian who has had her fair share of Tinder interactions that quickly land on horsey subjects: “I’ve been a horseback riding instructor for 6 years (up until a recent break due to injury) so the idea of talking about work outside of work is a pretty big vibe killer for me. You want a riding lesson? $75/hour. No, you cannot buy me pizza in exchange. That is not even a remotely sound trade in this economy. I take Visa gift cards, though.”

Rachael’s interacted with plenty of horse guys and non-horse guys on Tinder, but this particular individual really takes the cake — to the point that she screen-shotted their conversation for the rest of the equestrian world to enjoy. 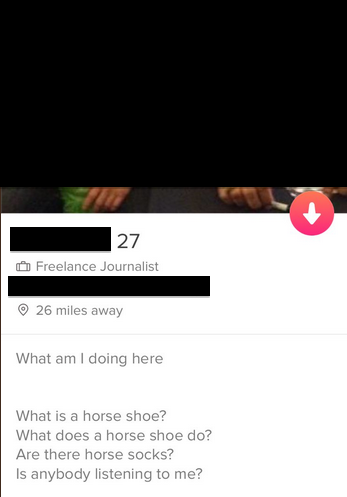 Rachael simply couldn’t resist the opportunity to educate an inquiring mind. Because, really, if there’s a guy out there wondering if horses wear socks, he would appreciate a little clarity… right? 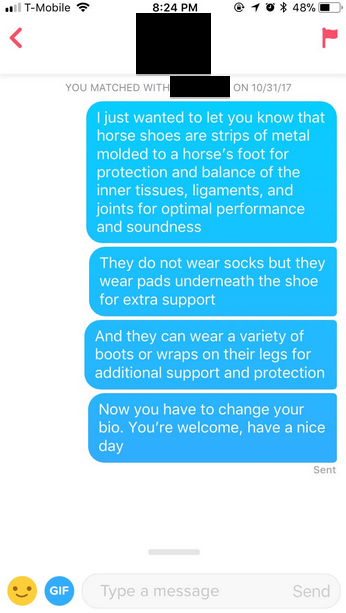 Rachael tweets: In case anyone was wondering, he did respond #equestrianproblems 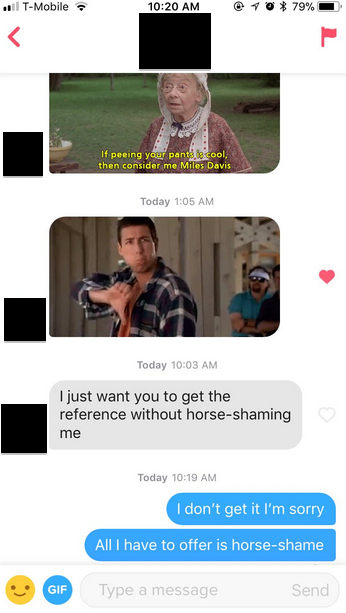 … and then things start to escalate. 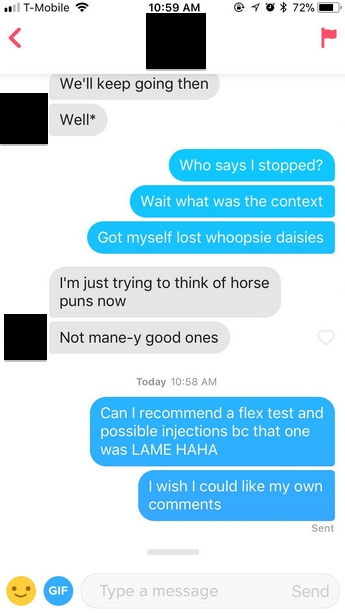 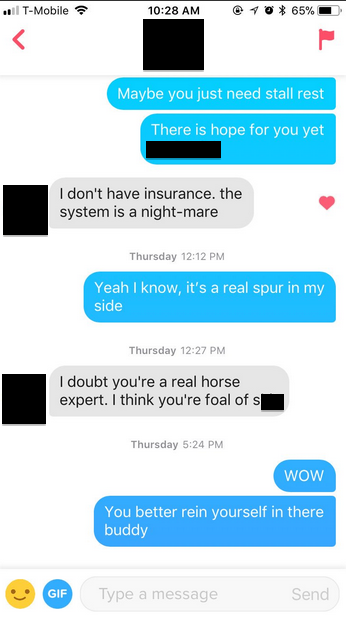 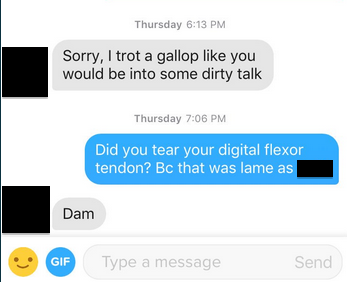 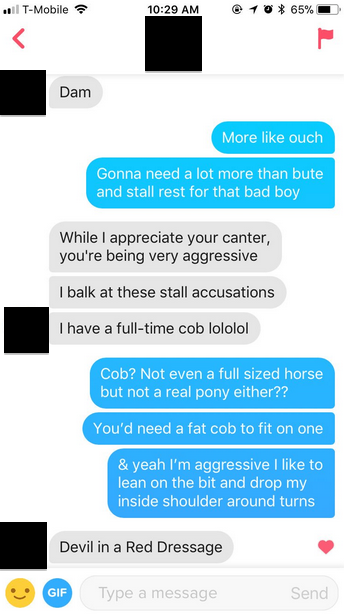 Okay, so while Tinder guy is clearly not a full-blown equestrian, we have to give him some credit for keeping right up and playing along with the puns.

Rachael agrees: “I have definitely had weirder horse and non horsey tinder experiences but usually they don’t keep up as well as this guy did! As far as I know he isn’t even a horse person, but he clearly knows enough to make some satisfactory puns.”

Unfortunately for this punny guy, “That interaction didn’t go any further than a little more banter.”

Typically, horsey interactions on Tinder seem to go in the same directions: “Usually, I try to avoid talking horses with non horsey guys, because you can only hear the same story so many times about how the beach ride they went on during that vacation a few years ago wrong because they had a ‘bad horse.’ Or they ask you to teach them how to ride, ‘what else can you ride,’ etc, etc.

“Even though I hate hearing the same old lame horsey small talk, that when I read his profile I couldn’t not say anything! Like I said on Twitter, I was #triggered. It was so perfect.”

There is hope, however: “Even though I [usually] steer away from horse conversation, I definitely am more inclined to swipe right if there’s a horse in a guy’s picture.”

Big thanks to Rachael for sharing her story and her hilarious conversation. Good luck out there, Horse Nation. Go riding.