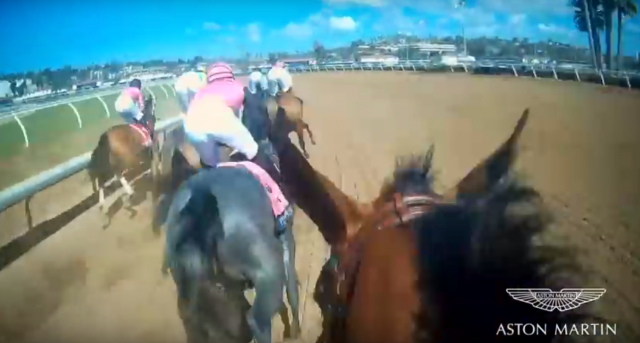 “Mr. Breeders’ Cup,” Mike Smith, piloted Caledonia Road to an upset victory in the Breeders’ Cup Juvenile Fillies. Watch how he did it from his perspective!

The Breeders’ Cup Championships is the culmination of a season of horse racing, an opportunity for the best in the world to face off for the elusive position of champion in a variety of divisions. This year, the Breeders’ Cup was held at Del Mar Racetrack in Del Mar, California, on November 3 and 4, drawing entries from all over North America with representation from Europe and South America as well.

Racegoers were treated to a series of thrilling races with safe trips for all entries. One particularly exciting race was the 14 Hands Winery Juvenile Fillies, where Caledonia Road piloted by the winningest Breeders’ Cup jockey Mike Smith took the win:

Whew! While we always like to watch a favorite win, it’s perhaps more intriguing to watch a long-shot closer make her bid for the win and take it all. If you want to watch how this race unfolds with the entire field, here’s a replay of the entire Juvenile Fillies:

Caledonia Road is by Quality Road out of Come a Callin and owned by Zoom and Fish Stable Inc., Charlie Spiring, and Newtown Anner Stud. Trained by Ralph Nicks, Caledonia Road is his first Breeders’ Cup champion; the trainer alluded to the hope that the filly would run in next year’s Kentucky Oaks for three-year-old fillies.